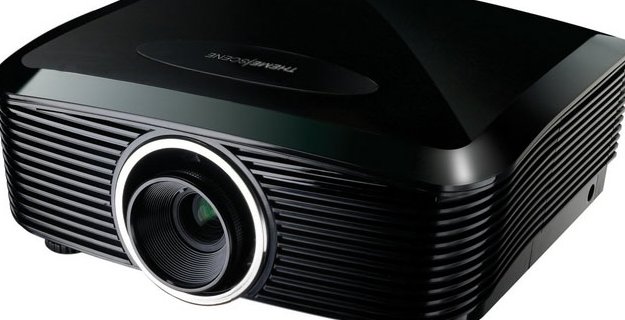 With John Hadjigeorgiou and Nikos Tswla visited the cozy space of Kosta in Peristeri, to see and to kalimpraroyme projector, a OptomaHD87.  It was the first time that I come in contact with the HD87, although in the past I had seen them ID82 and HD83. The Optoma HD87 is essentially a clone of Infocus SP8604.

Costas has established himself the Optoma HD87 in the living room, and all the rest of the setup, the screen and the audio track (amplifier, speakers, etc.). Before our visit, had been preceded by some telephone contacts with Costas, and had told me that it has installed the headlight in a ‘ box ‘. “Namely you mean an electric lift in a false ceiling?” I asked, and I had no answer, so I had great curiosity to see what kind of box indicated.

Wanting to make “invisible” connection and power cables, Costas installed the Optoma HD87 within an oblong box-false ceiling, in which they are installed and lighting with small spots. The projector is located inside this box sitting normally in the feet and not topsy-turvy, as one would expect. 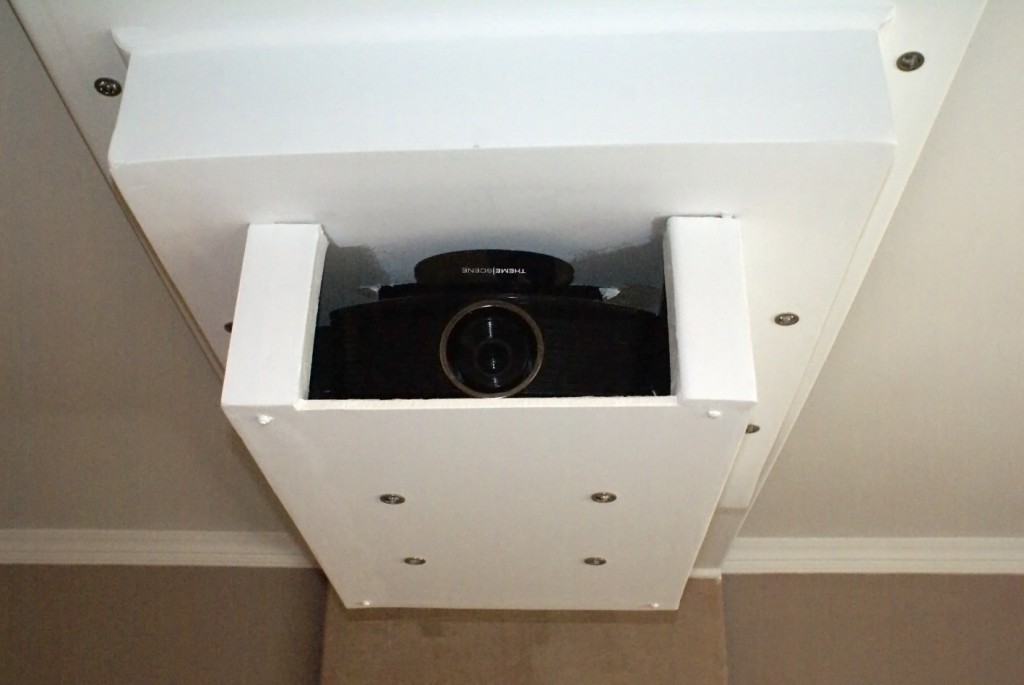 The first question that expresses someone watching this establishment, is whether they adequately ventilate the projector for proper cooling. Costas believes that the margins on the right and left and over the projector are sufficient for proper cooling. A and the Optoma HD87 works seamlessly within this construction for a long time, it seems that it was actually right.

This is not – unfortunately – the same for the installation of the projector relative to the screen who submits an impressive electric white Grandview with tensioners, at 106-inch frame, of course is why 16:9. Specifically, to drop the image into the screen, Optoma projector is positioned to slope downward, and with almost termatismeno lens shift downward. This in turn has naturally resulted in the creation of table frame, to correct, Costas makes extensive use of keystonesto-28, through the projector’s menu. As we all know, the use of the keystone is virtually forbidden on demanding home cinema installations.

The results of the use of the keystone is visible and the image of HD87 Optoma, with loss of overall sharpness considerably. Of course we couldn’t do anything in this area, Costas prefers using the keystone of the trapezium in the picture, but I hope in the future to correct the problem with better (i.e. lower) mounting the projector.

In setup is included, as mentioned previously, white electric screen Grandview106 inch with turnbuckles, as well as the impressive triad of high end Pioneer’s speakers, the S-1EXgia right and left, as well as the S-8EXgia the main Canal.

The screen was really flawless thanks to the tensioners without the slightest waving from side to side, resembling the taut felt on a pool table! The sound from the speaker Pioneer’s triad should be also very impressive, although we heard little speakers during our visit. 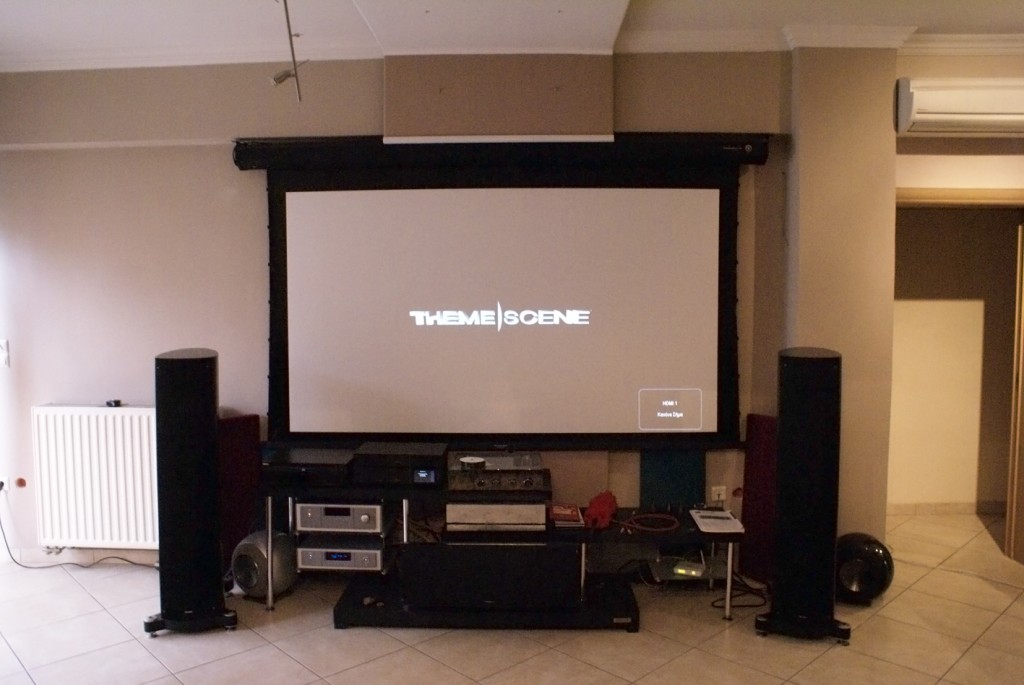 After we had warm well the Optoma for any half hour and up to discuss all this, we started to see exactly how he watched Costas on Optoma, with what IE settings, until that moment. The tray of the AVSforum entered well in Blu-ray player, and immediately found the first serious “submitted”.

Brightness and contrast were serious mistakes in setting them up. Specifically, in the known paternaki-piano the boxes of 90 and 95 IRE was missing (burnt white). And in a black setting paternaki however, the digital under 25 was also missing (krasarismena black).

Discussing with Costas and discovered the source of the problem. Formerly the Optoma played with a pc source, brightness and contrast were adjusted by the same then, but later changed the source with the Blu-ray player, with this result. 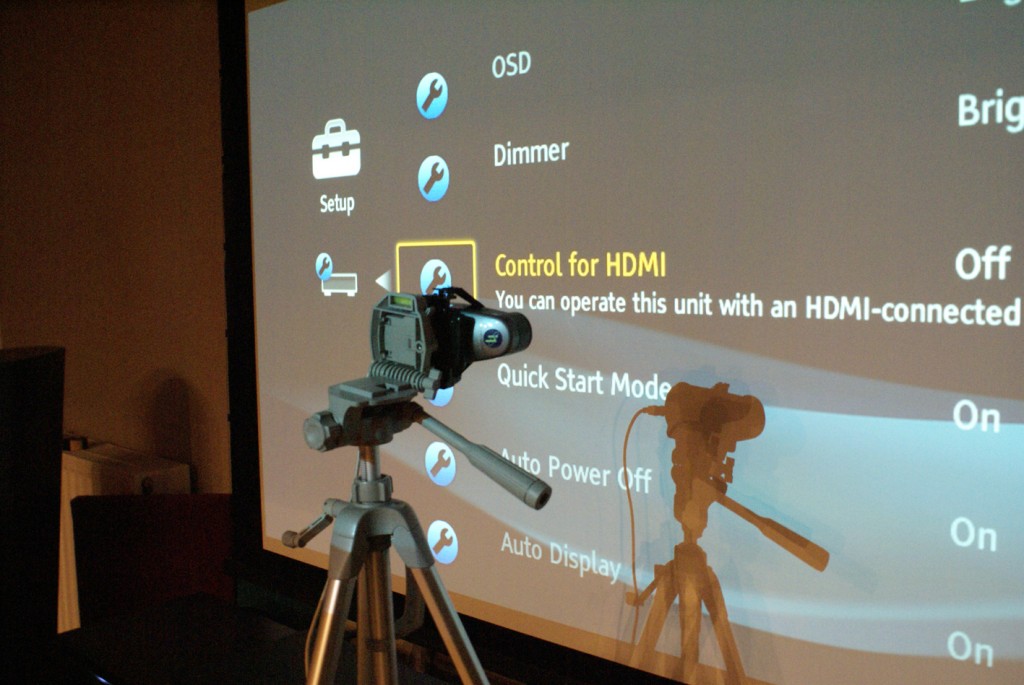 After you have corrected the settings to brightness and contrast, we started to measure the mode you prefer to see Costas, namely Cinema 1. In all the measurements you will see below, the dynamic IRIS is switched off, the lamp is at a low and the Optoma had leftover brightness, while fixed iris had entered initially in the 5, but later climbed to 7.

Like gamma chose the 2.3 from the projector’s menu, a San Francisco area and was quite good, with medium colors on side walls and without too many reflections. 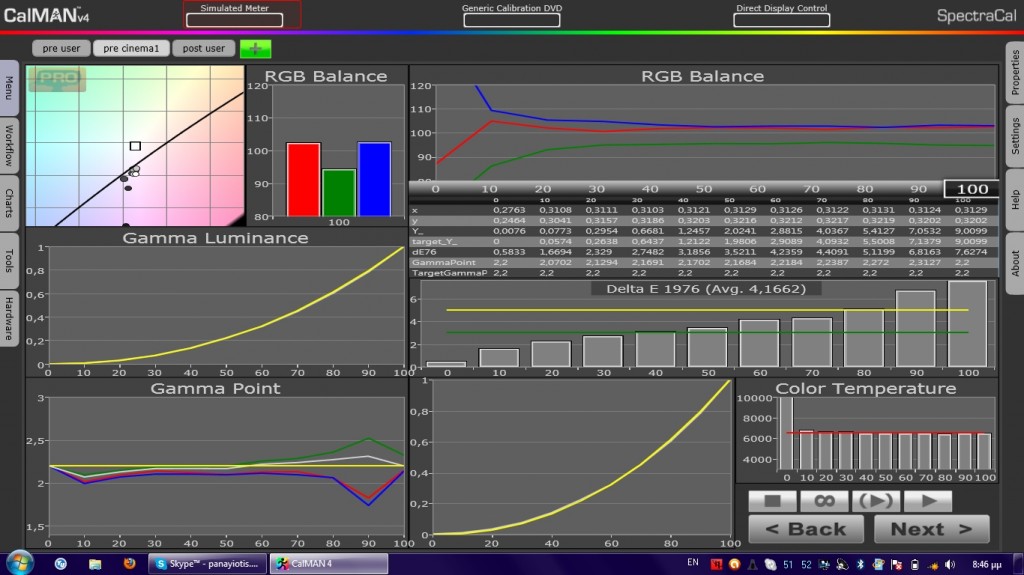 As you can see, the Cinema1 isn’t bad, particularly in RGB, with the red and blue light over the green. In particular, gamma at 90IRE, noted on extreme contrasts between the gamma of blue and red, and green it. The total Delta E of Cinema 1 measured at 4.16.

Immediately after the modeUser were measured, and as quite a pleasant surprise, the projector fared even better. 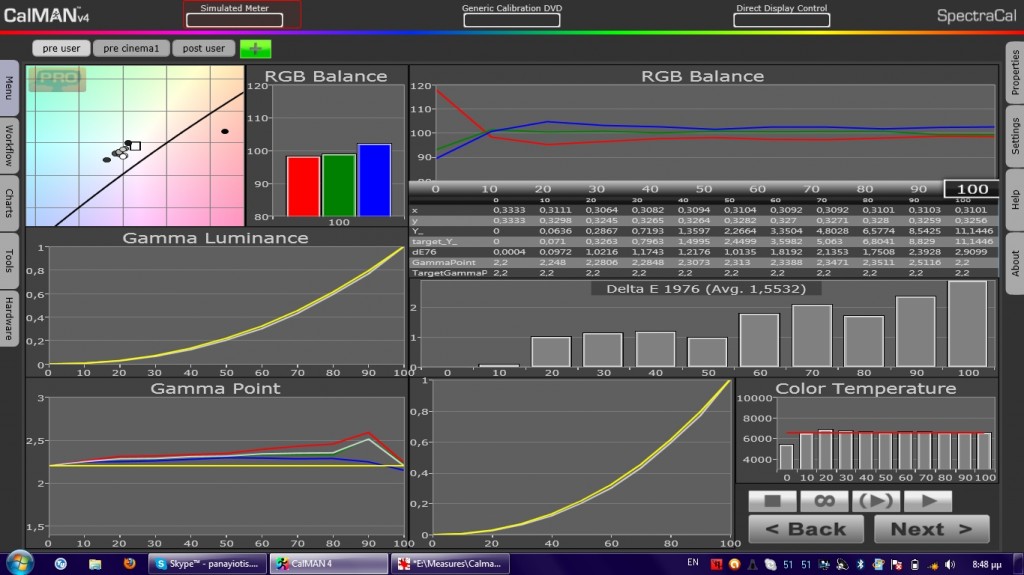 In RGB mode the User balances quite better as you can see compared to the Cinema 1, but also in the gamma themataki of 90 IRE largely corrected, but not disappear. DeltaE To measured only at 1.55, a very good measure, could play so the Optoma HD87 and without calibration, with very satisfactory results.

Here you can see the longer kalimprarismeno User mode of the projector. 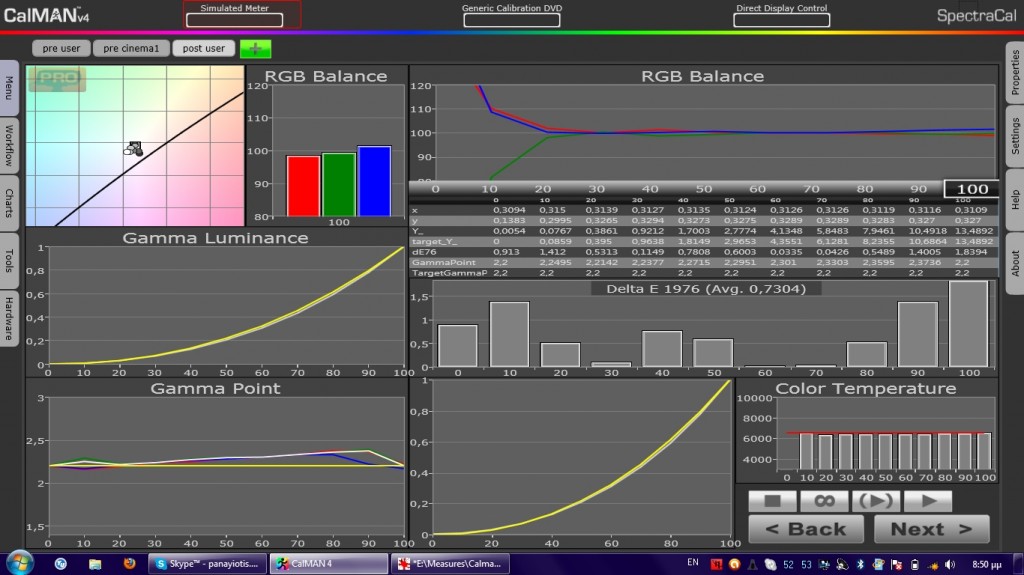 Extremely balanced projector from 20 up to 100 IRE, while the ‘ themataki ‘ of the 90 IRE at gamma has now almost disappeared. The DeltaE measured at 0.73 which is an excellent measure.

Passing in the paint, had great curiosity to see how it behaves in the CMS, a projector and projector series, HD82, CMS had not, but my sightings from the OptomaHD83 available, was limited. Here you can see how measured the Optoma HD87 before its setting. 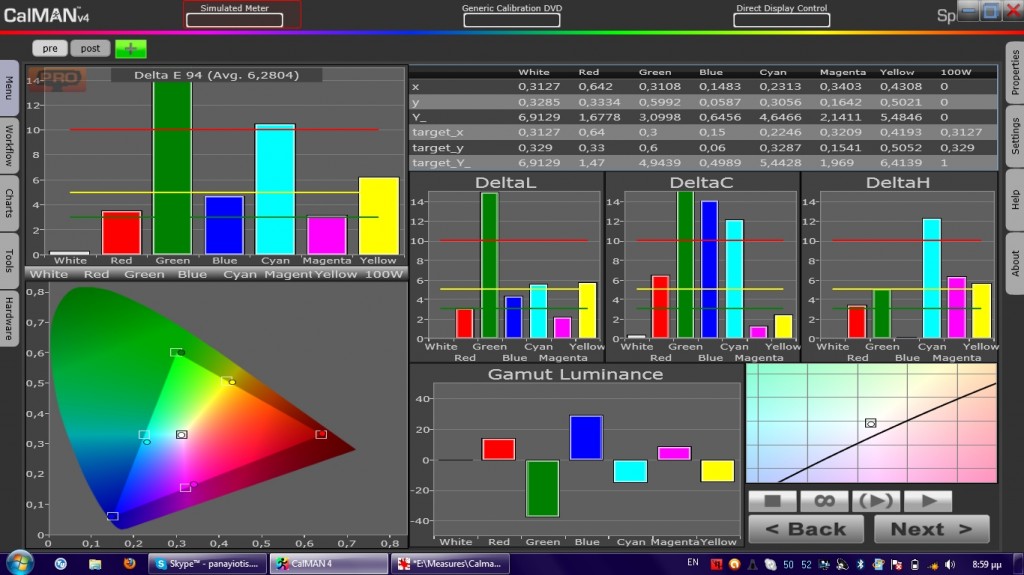 With DeltaE at 6.28 certainly isn’t bad, but can be serious but improving. The biggest mistakes like you can see measured in green and blue color.

The projector very pleasantly surprised us with a CMS ultra sharp, almost surgical would say, allowing us to do essentially that we wanted with the color. Nikos Tswlas had grabbed the Optoma remote control and played like a small child, he discovered a new and highly entertaining game. Here you can see the longer kalimprarismeno User mode of the projector. I deliberately chose not to do in Calman autoscale the graphs, in order to clearly distinguish the differences. 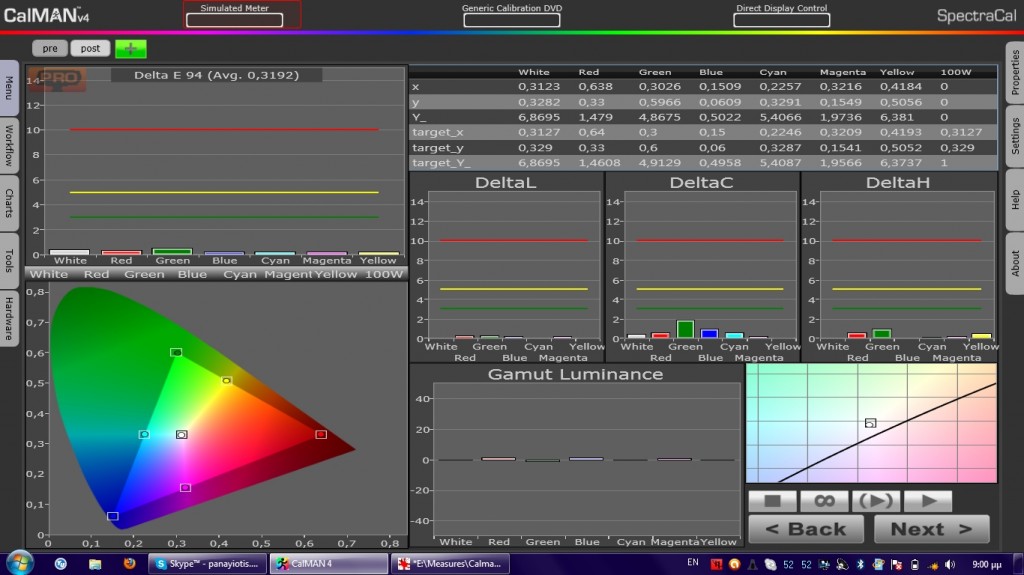 As you can see, all the bars of color have almost disappeared from the charts! The measured in DeltaE 0.31 is almost unreal, by far the best I’ve ever seen on any projector.

As regards other measurements, the on/off projector contrast measured in 1540:1 with the IRIS disabled, and I personally will be played so the projector, a viewing tests with enabled, the IRIS HD87 presented the exact same problems with HD82. I.e. the IRIS in position 2 was bad, with brightness fluctuations that became very easily noticeable, while in position 1 improve quite, again showed a luminance fluctuations in some scenes. 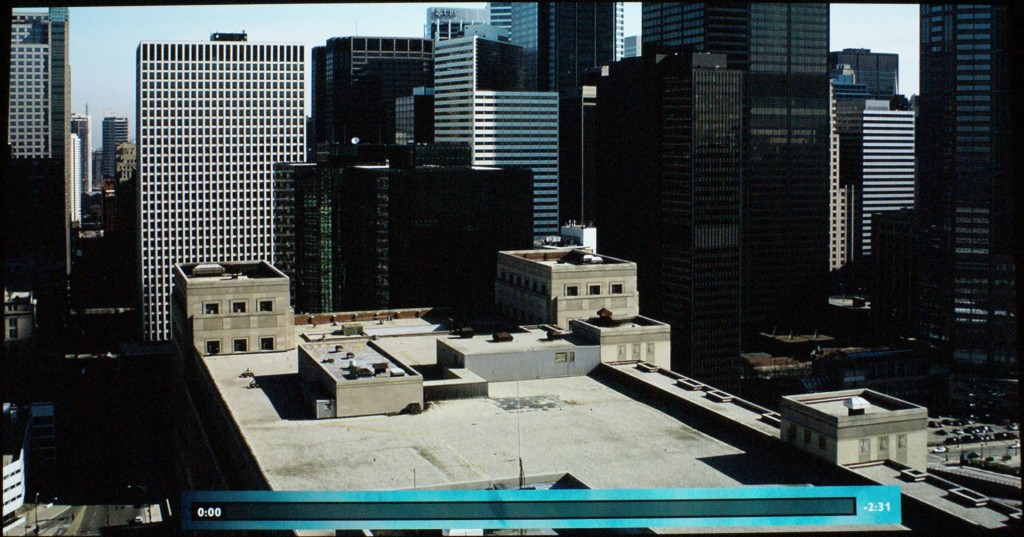 As regards the Pure Motion and Pure Detail, apply that to better HD82/83, to leave it disabled. 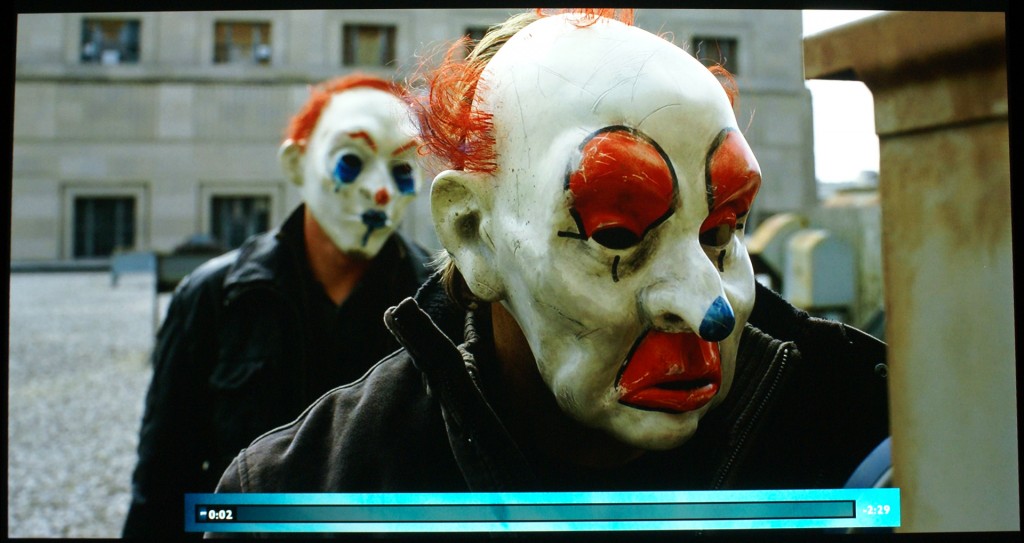 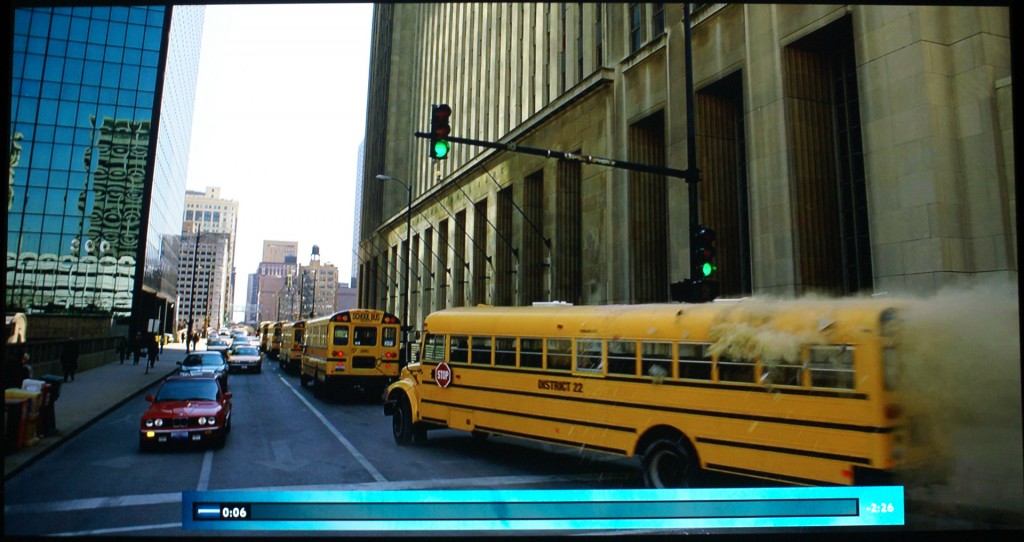 To thank on behalf of the Group of Projectorjunkies Kostas for the impeccable hospitality, but the appetizers and beers you treated us. Wish him also to be able to correct the problem as soon as possible to the installation of the projector with a lower placing, which will improve much the image of, and will be happy so far as possible!