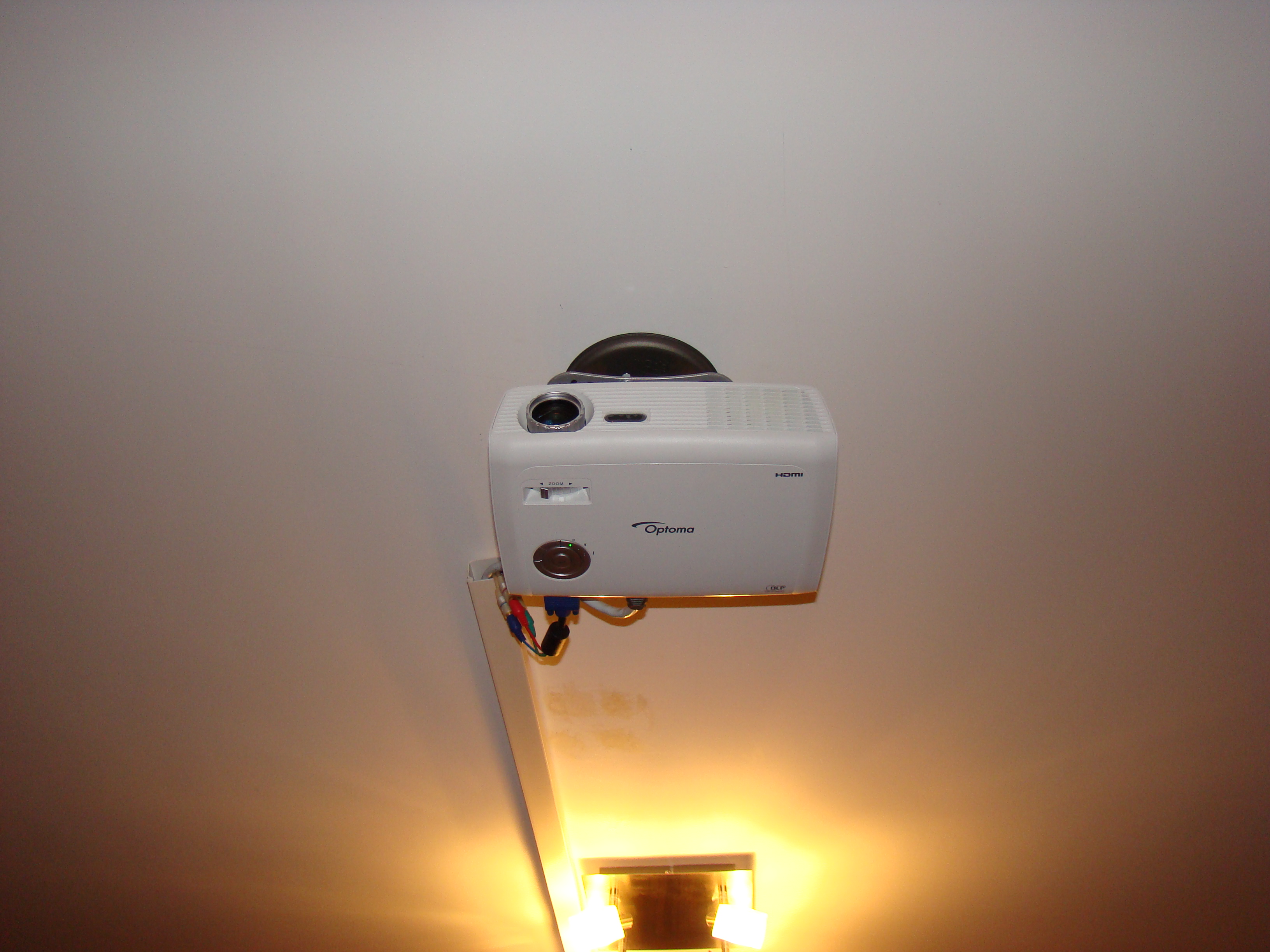 A few days ago we found ourselves on the intimate space of a friend as it evolved, reader of projectorjunkies.com, who invited us to see the display space and “grub” projector.

To start with, to thank Anthony for his invitation and for their excellent hospitality. 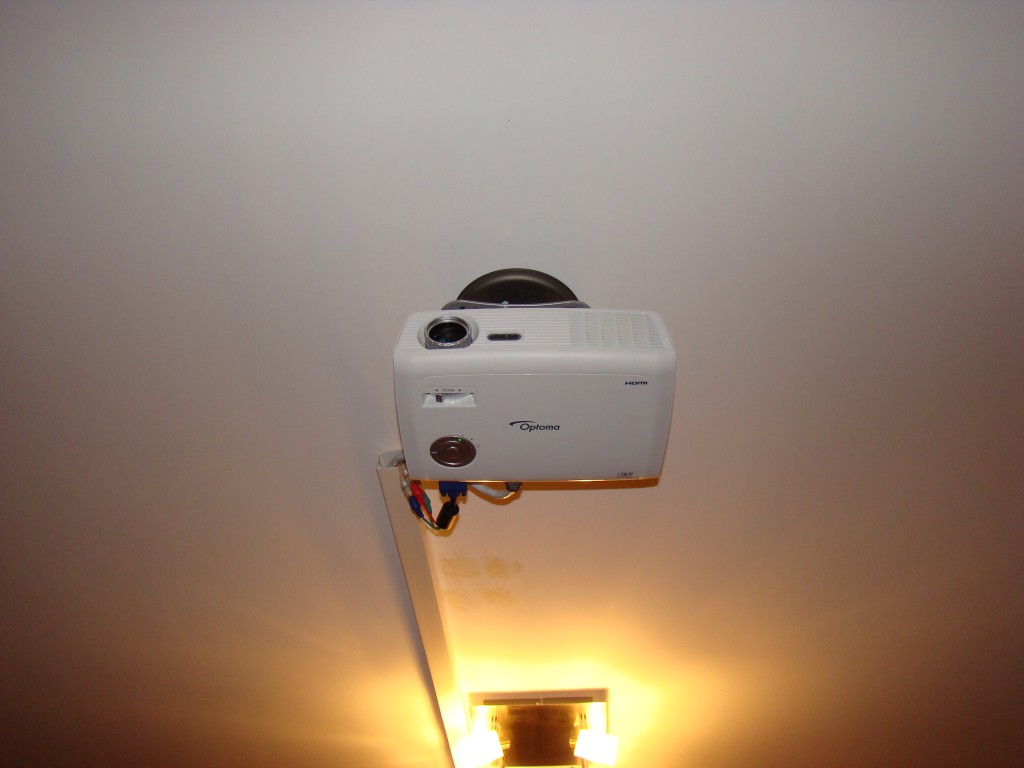 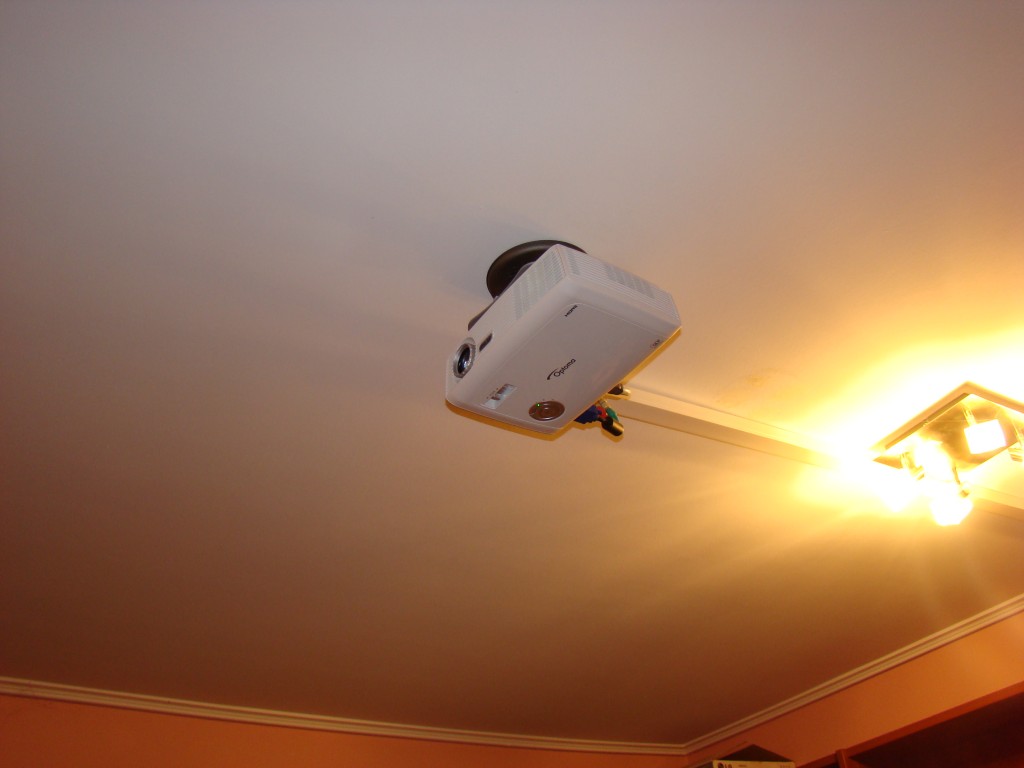 Our appointment was set at 7 in the evening so we have several hours ahead to kalimpraroyme the projector and see up close what fish it catches a DLP 720p in the age of 1080 lines.

The space a play-room rectangular room of around 30 square on the ground floor Maisonette with ideal dimensions for creation of personal home cinema.

Unfortunately o space had not yet perfected as to the sole use as a home cinema, i.e. There were no essential blackout to be able to get the maximum of the full-size image (see white walls, dresser with glazed Windows, etc.).

You don’t hide how fell us drooling with the ideality of space and jokingly said amongst ourselves, that if we belonged, will be bafame black until the door knob!

Let’s get on the juice starting from the screen. 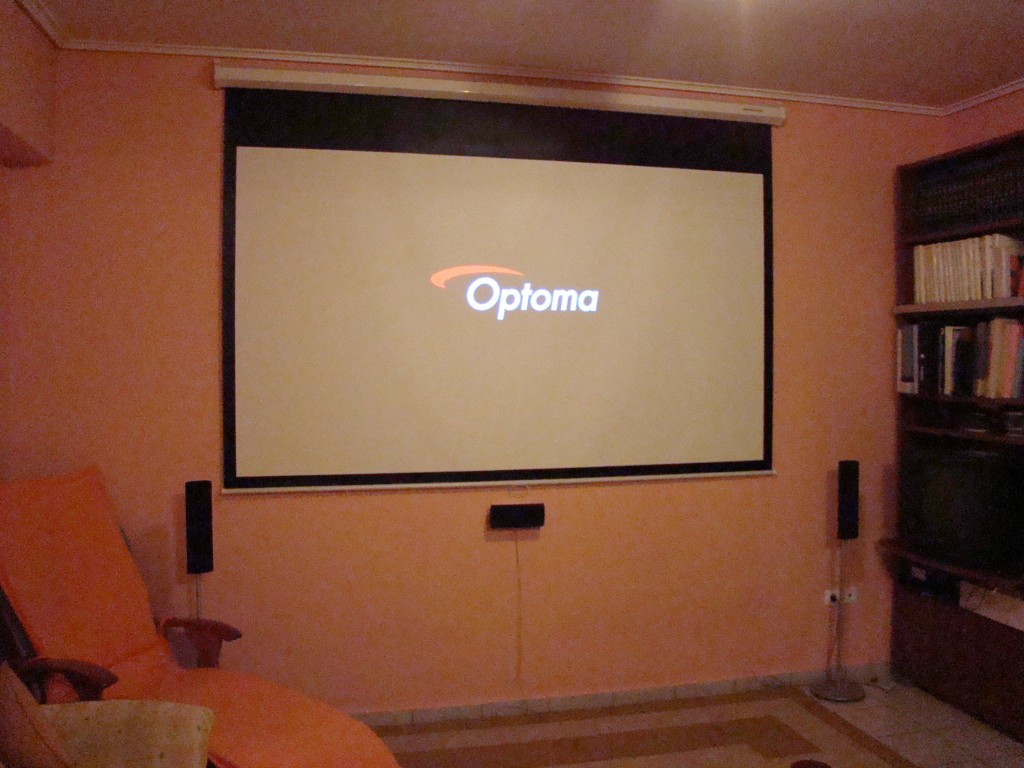 We started taking count of the screen to see what temperature white returns.

The measure showed a very balanced behavior with little deviation from the ideal, somewhere to 6600 degrees kelvin. 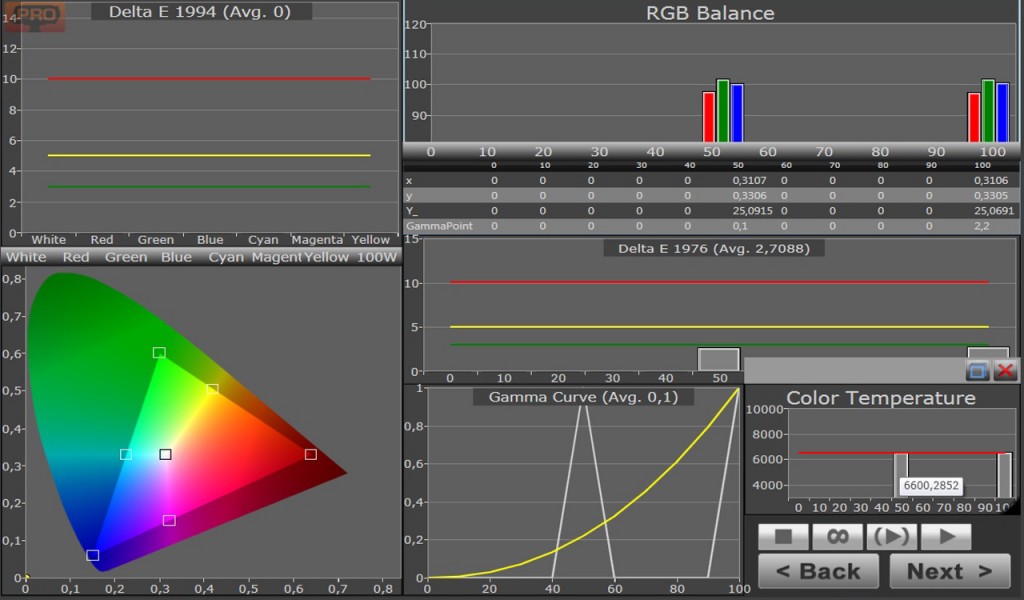 Here to say that it is very important that our monitor to be as neutral as possible (closer to the ideal 6500 degrees) to avoid extremes in our projector settings (not that we can’t bring our projector ideals, they will just need bigger “carving” in the sliders).

After we took our measurements of the monitor started to deal with the projector.

For source had a blu-ray LG HR825T which gave with HDMI output on Optoma 3D-XL and this in turn via HDMI of course to headlight.

Measuring instruments, a i1 Pro spektrometro of X-Rite software with known CalMan and a color sensor with the Spyder 3 software also known ICFR and of course 2 laptop so we can get each time 2 independent measurements of spektrometro and light meter. 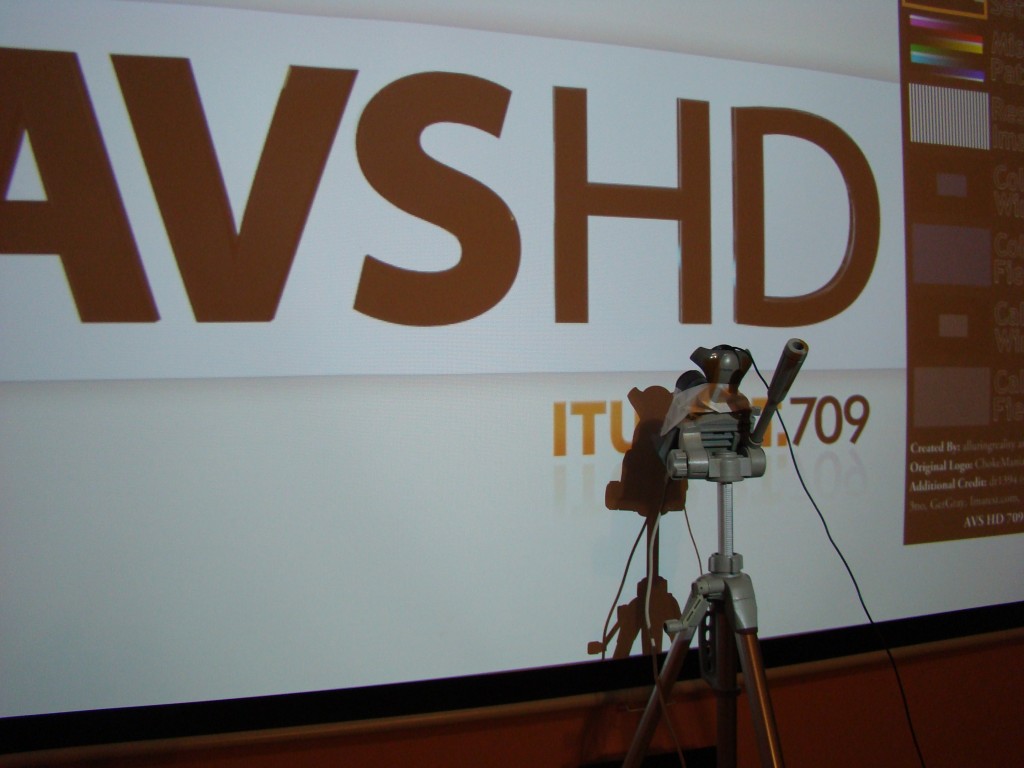 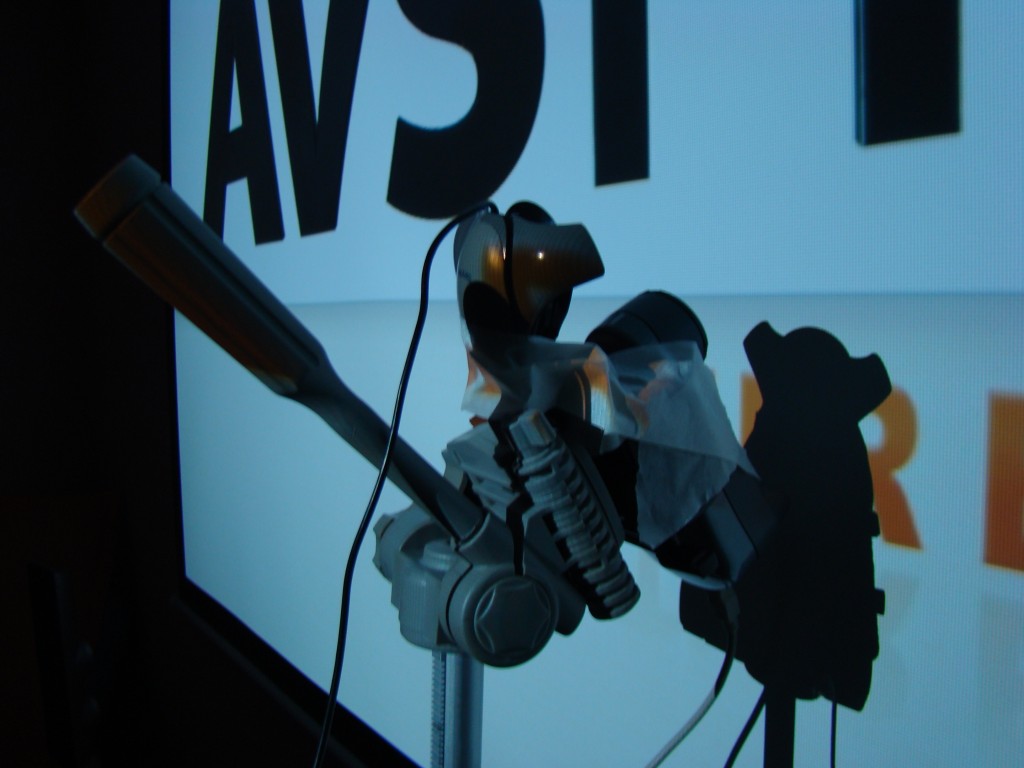 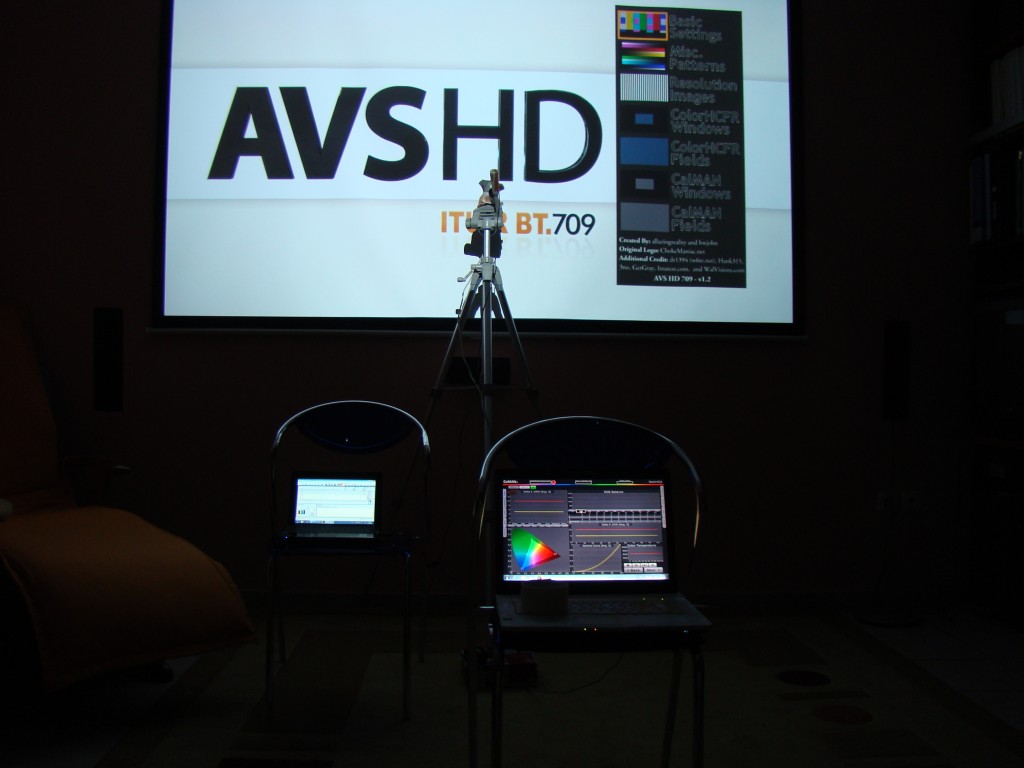 We started taking measurements from the projector to the situation we found … the results were the following … (the observant will watch that we escaped the measurement at 100 IRE. .. others had little importance since it involves measurements before setting) 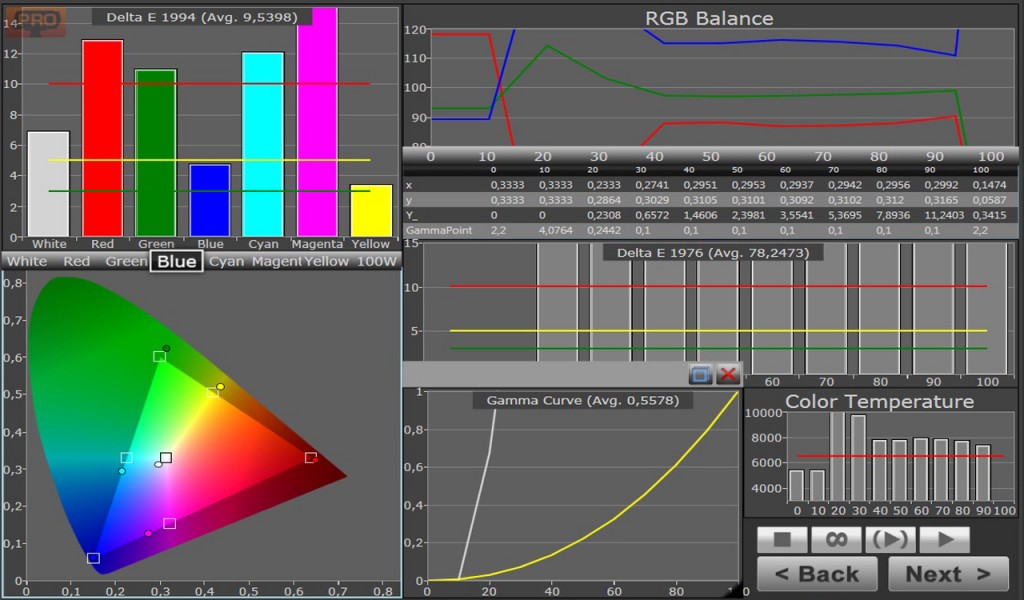 Let’s start from the RGB that literally stood in his own dimension with the blue to be in God and the Red lags considerably.

In the color triangle things were somewhat better with the three primary colors to be in a pretty good spot (the blue almost reference) and secondary to deviate from slightly (yellow), until enough (cyan and magenta).

Unfortunately here a hands were tied because of lack in CMS menu of Optoma.

Once we adjusted the brightness, contrast and sharpness (chapter basic settings) we started to touch the gain and offset of primary colors in order to bring the RGB in as perfect balance (capital advanced settings).

After several experiments we managed and we got a very good result as you will see below …. 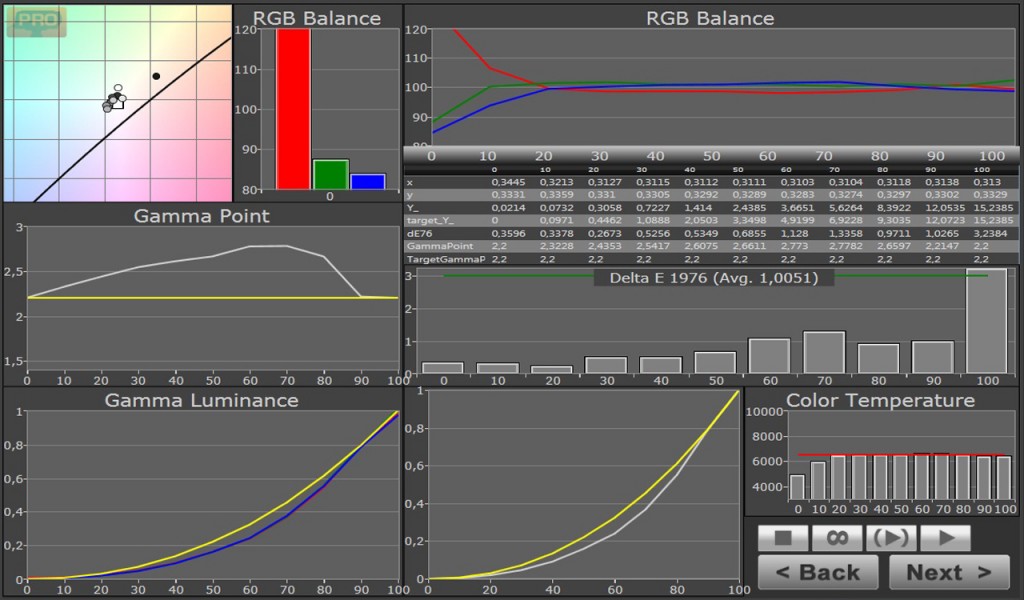 The three primary colors came and “sat on” almost ideal and with this setup we got brightness on screen ‘ 106 15.2 Fl. .. not bad at all!

The problem we faced was the gamma curve which made a weird upload from ideal 2.2 to 2.7 in 60-70 IRE and that could be put right not with anything from the projector’s sliders (all 4 gamma modes which has factory).

After diplotsekarame that the source and the projector was properly “locked” in terms of video levels, we concluded that it was probably a problem of source and not the projector (Optoma unless made such a move in order to balance the increased brightness of the projector with a higher gamma in Mesa, IRE from 20 to 80, by no means unlikely).

Here to say that the measurements via spyder 3 and HCFR was identical with a small standard deviation of around 2-3%, which means that someone with a cheap sensor to get enough valid measurements of the projector.

After we finished the posting settings allow us the sliders of the projector, we put some scenes in order to see the result … 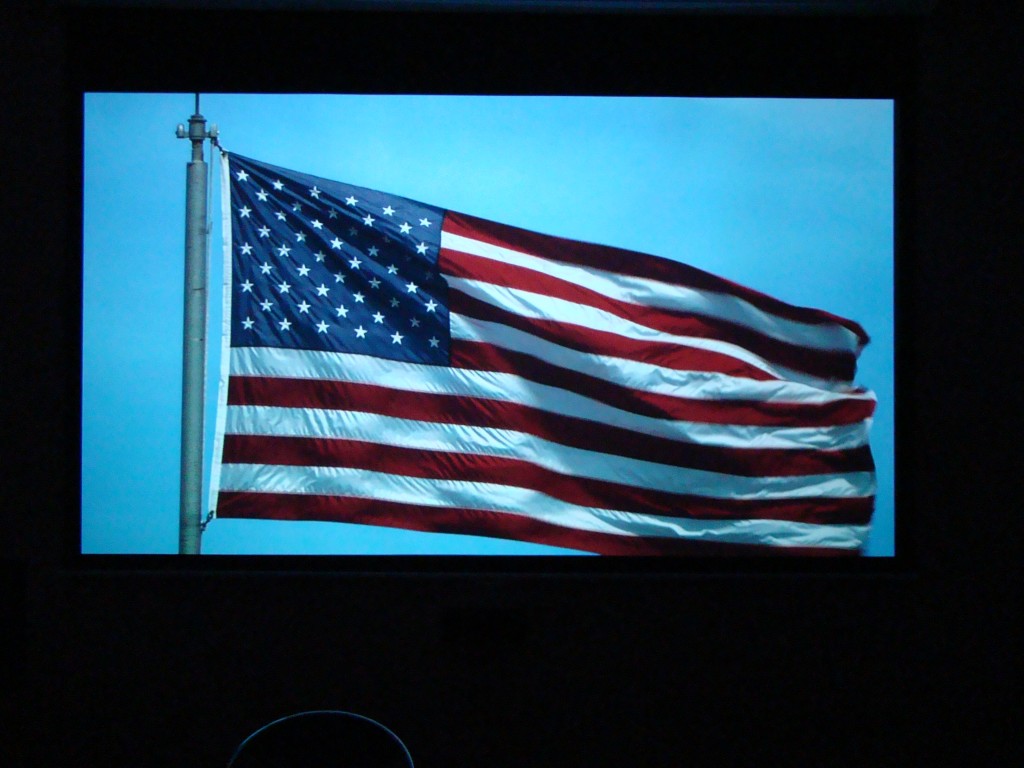 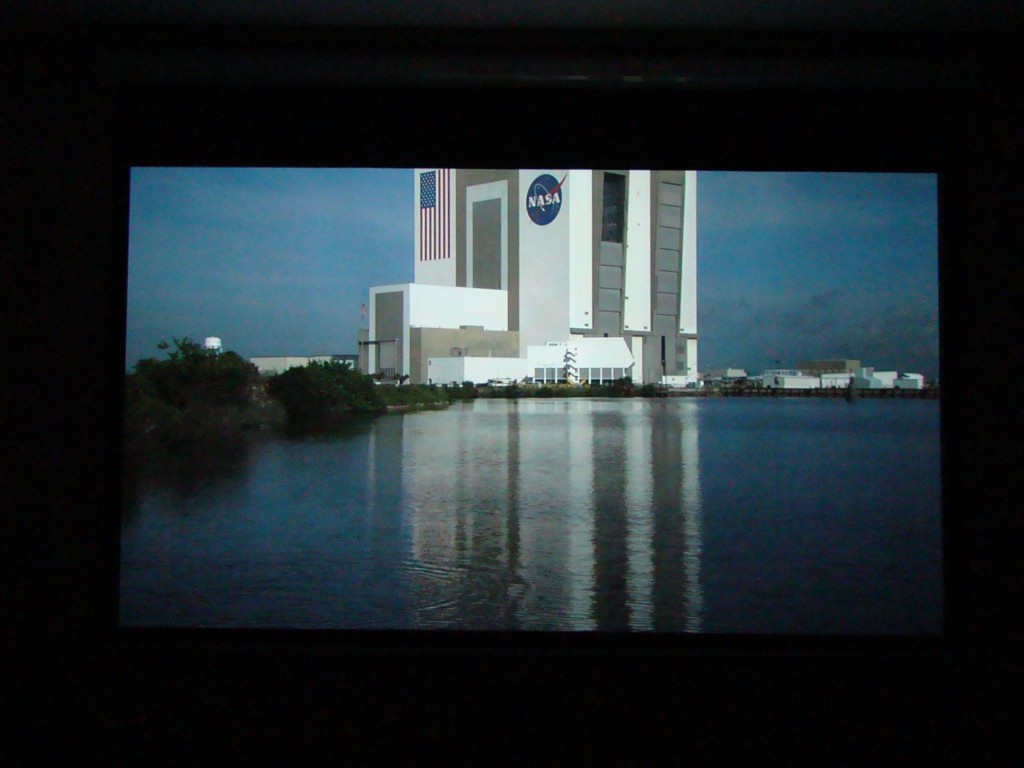 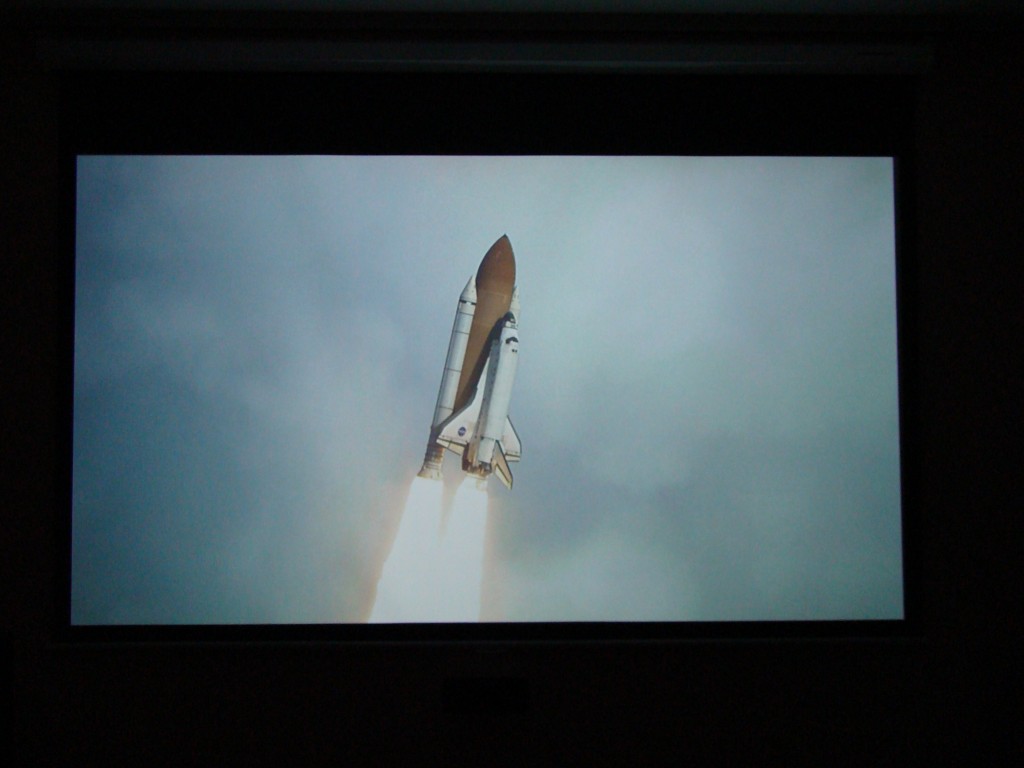 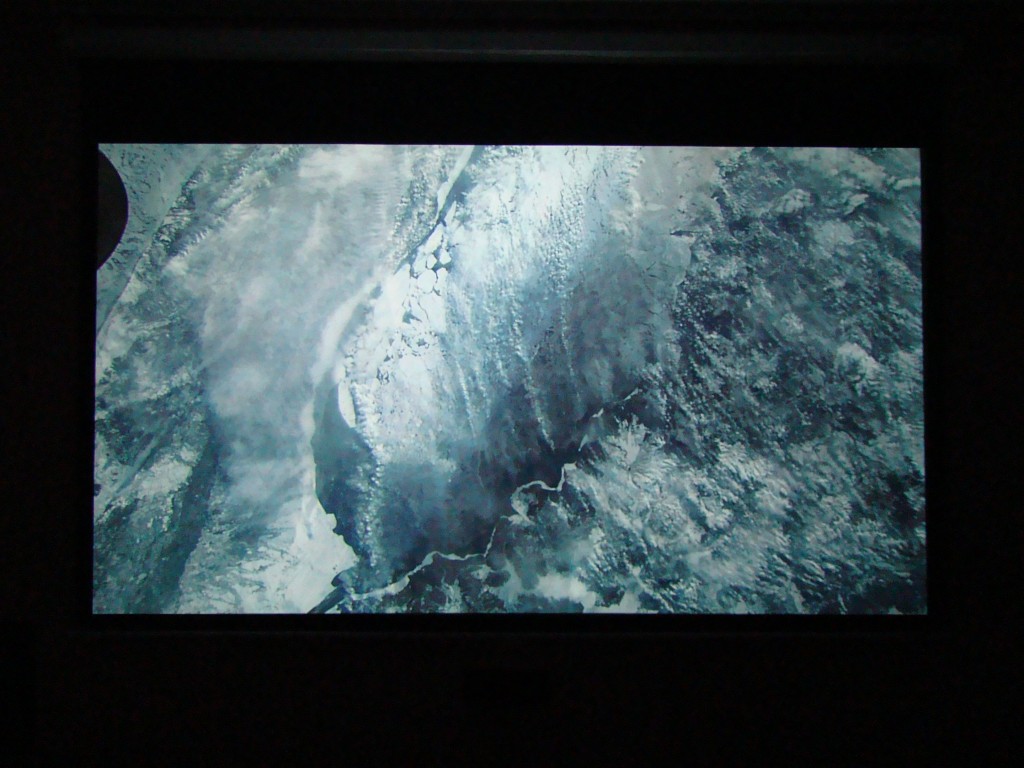 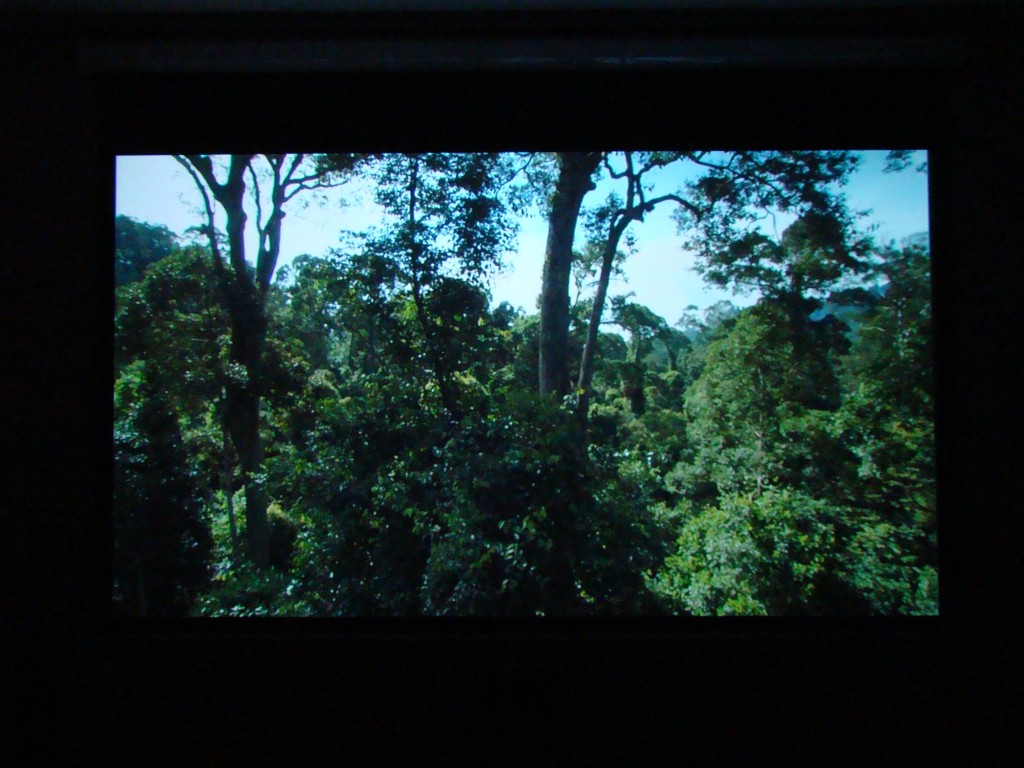 O projector had around 500 hours on the lamp and our impression did the brightness of 15, 2Fl, which is more than enough brightness for the 106-inch cover (the projector was calibrated with the lamp in low!).

At the end we put and some 3D klipakia in order to see what makes the 3D-XL combined with the Optoma HD67.

The result was simply superb …

We were generally impressed by the 3D projector, so that I dare to say that puts the glasses on very expensive current models … and reminded us why DLP projectors are the Kings of sorts (3D)

on/off contrast: 710:1 (real contrast without using the IRIS, measured on the screen and not the lens)

Bad gamma (probably due to the source)

Chromatic aberration (due to lack of regulatory CMS)

Our impression is that we were dealing with a fairly honest 720p projector that although the 2-3 chronakia that carries on his back (in 2010), continues to perform superbly for the data category and could comfortably meet the needs of an average tainiofagoy.

Compared with corresponding 1080p DLP projectors loses on points, perhaps with greater variations in black, the sharpness and the “intensity” of the image while has nothing to envy from the same analysis models respectively.

Also negative factor in the picture is the lack of regulatory CMS so that corrections can be primary and secondary colors in accordance with reference standards, something that modern projectors 1080p have in their majority (formerly CMS and have other more expensive models 720p analysis).

Then the evening followed by profound philosophical discussion on video and not only (accompanied by red wine) and time to leave he arrived without get wind of.

Anthony thank you opened the doors of your own home cinema at projectorjunkies.com and wish wholeheartedly good views!