But the time crew arrived, the decision was made, so I took the most simple materials in which you can capture your idea, paper and pencil, that is, and I started designing…

I wanted a piece of furniture that accommodates vividstorm’s UST ALR display and my personal LASER UST Xiaomi 1S 4K projector, but at the same time can stand somewhat like a basic TV furniture.

The first difficulty I encountered was to calculate the distances between the projector and the screen as these had to be done with relative accuracy but at the same time to be able to accommodate other corresponding UST models of headlamps later in case of upgrade.

So after doing a related survey on the dimensions and throw ratio of the UST models currently on the market I designed the projector rack so that if necessary it could accommodate models other than my xiaomi with different size and throw ratio.

It can be extended by up to 50 cm more as well as moved a few points to the vertical axis if necessary in the future (although the height of the screen is adjusted, so it is not nessesary to change height on the shelf).

So I took my drawings, rode my bike and went straight to George (the carpenter who would undertake to implement it) to see if what I was looking for was possible or not. George was introduced to me by a good friend (a carpenter in the profession too) and told me if not him, then no one…

Because I have to talk about the carpenter who implemented this idea, I want to make the following clear. It is not a sponsor, there was no “discount” in exchange for some kind of advertising, I asked and got permission from George to refer to him since I had already decided the whole process to present it to you with an article and video, these to avoid misunderstandings

From this first appointment I realized that here I was not just about a carpenter of what I have used at times for my various tasks. We’re talking about a space well equipped with people willing to listen, to think, to create.

Well, now you know one..

But let’s go see what’s next…

So I met George at his carpenter’s shop and informed him of what I wanted to do and why. I showed him the rough draws I had with me by naturally holding a small basket and having prepared myself for the answer “we can’t do this” which was the most likely…

But the exact opposite has happened. The response was immediate, George understood the style of the furniture within seconds, even though he had no idea what an UST projector is and what a projection screen is. 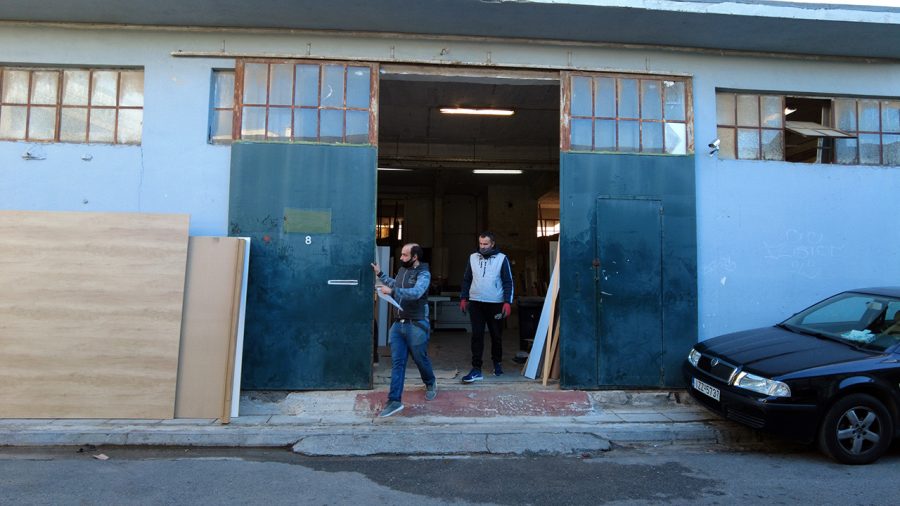 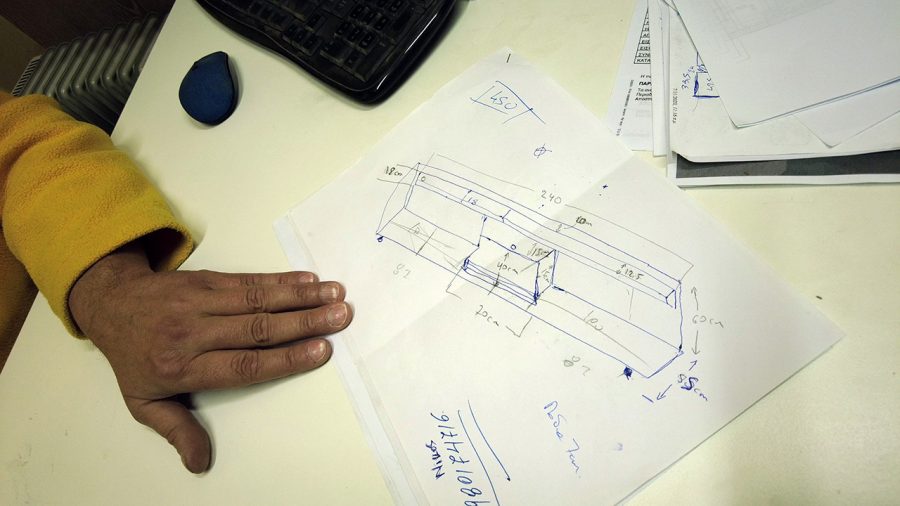 After agreeing on the price, the final design and the color of the wood, construction began… 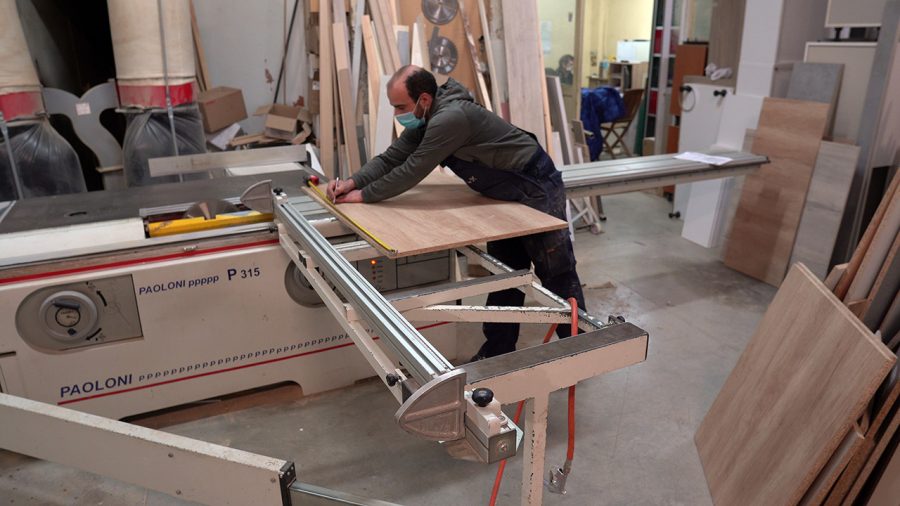 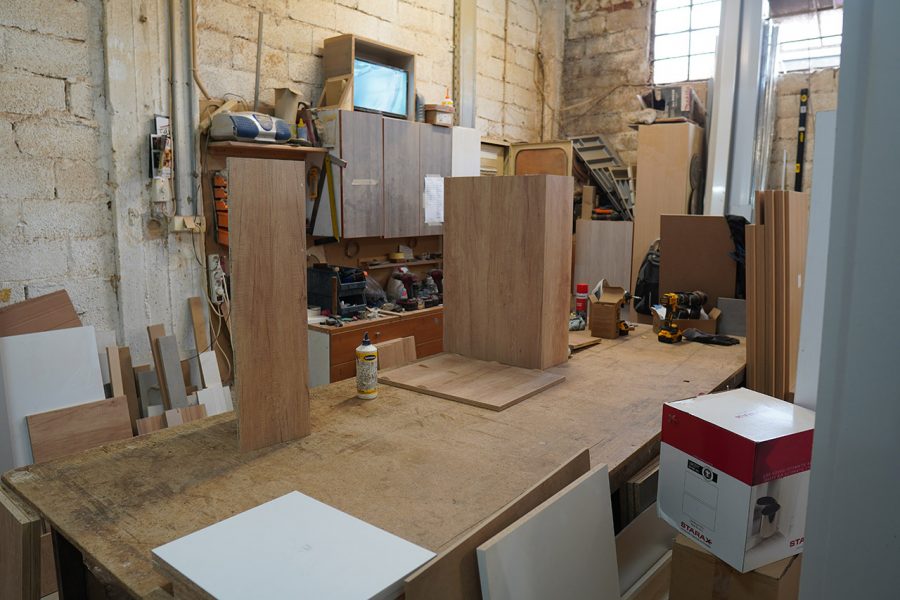 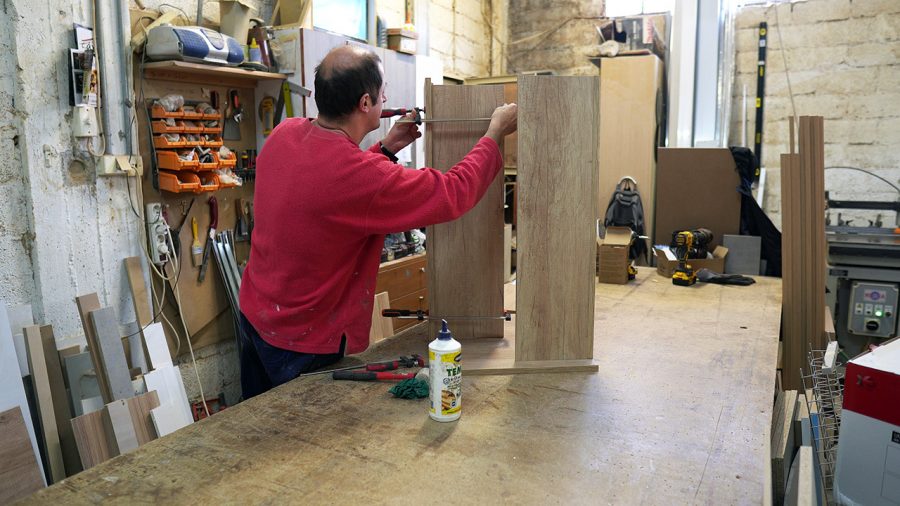 I had informed George that I would like to take some videos and photos from the build for my blog, he allowed me, so I watched almost all the build steps. Of course, there was no shortage of last-minute corrections since we are talking about original special purpose construction. 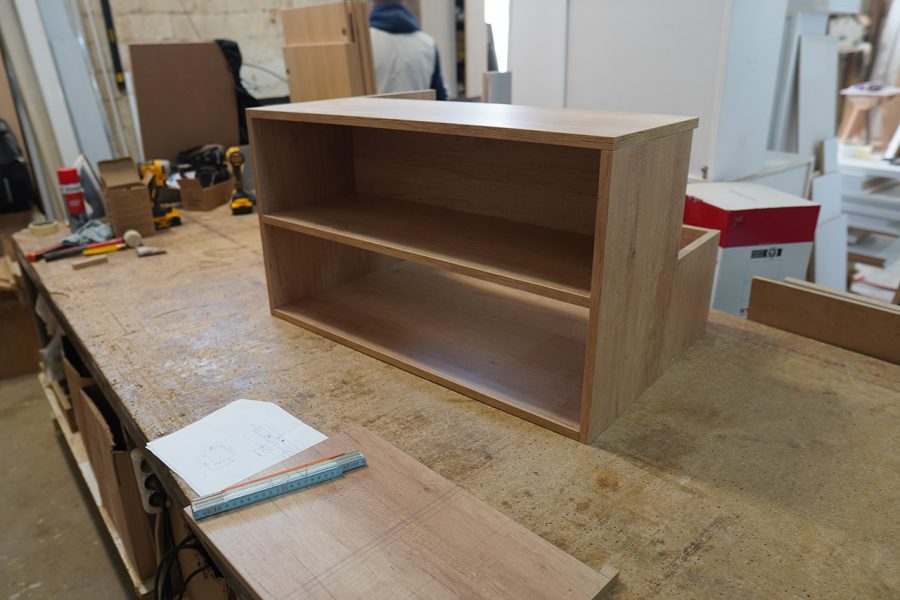 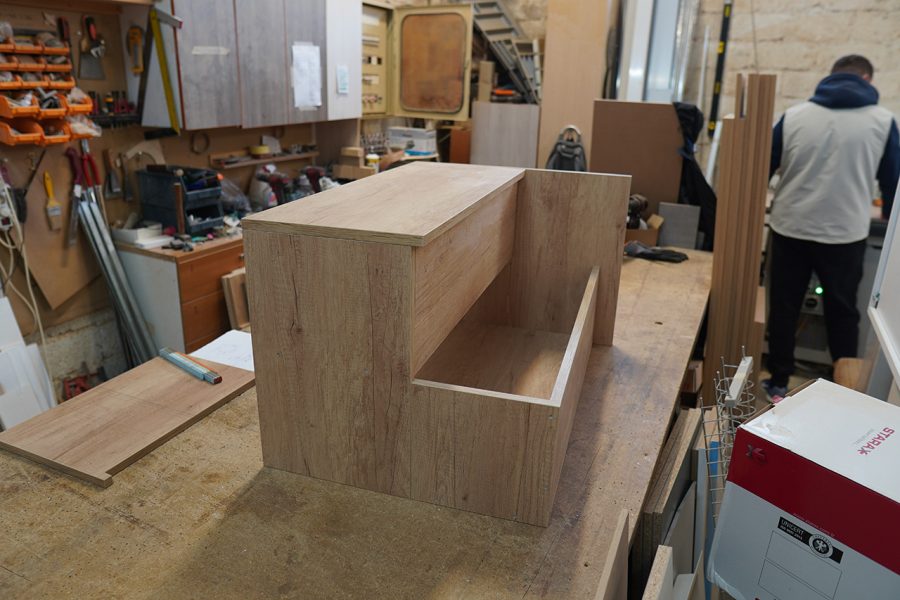 In fact, while the furniture was almost complete, I asked for a change that almost cancelled the overall design of the furniture. George’s answer was “of course we will do it, just give us one more day”. The next day the furniture had the changes I had requested. Amazing things… 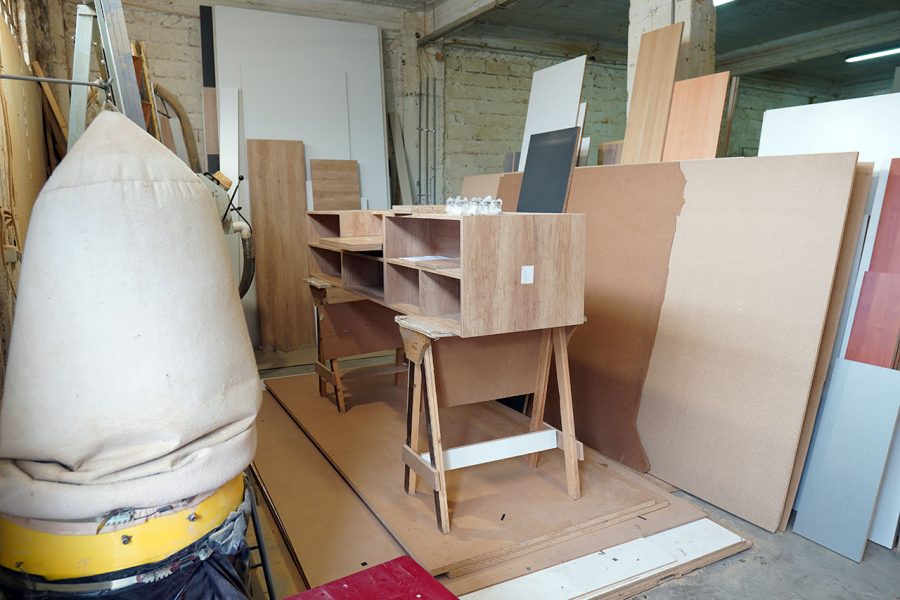 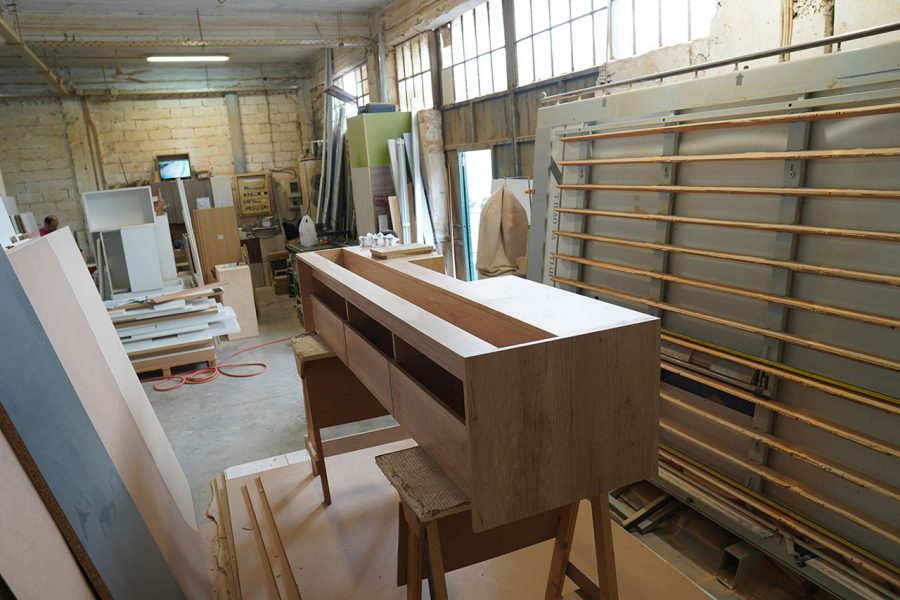 To say that many things that I had not thought about and related to the practicality of the furniture, George did it himself!

Rails with balls that hold the shelf steady and allow it to be fully extended if necessary without being affected by weight.

Space and openings on the rear façade for cable management.

Also detachable partitions for the shelves that you can put them in the places you want, nice! And so we arrived at the transportation and installation of the UST cabinet in my place which was done by a special workers of the carpenter in record time. The old gone, the new one’s come. 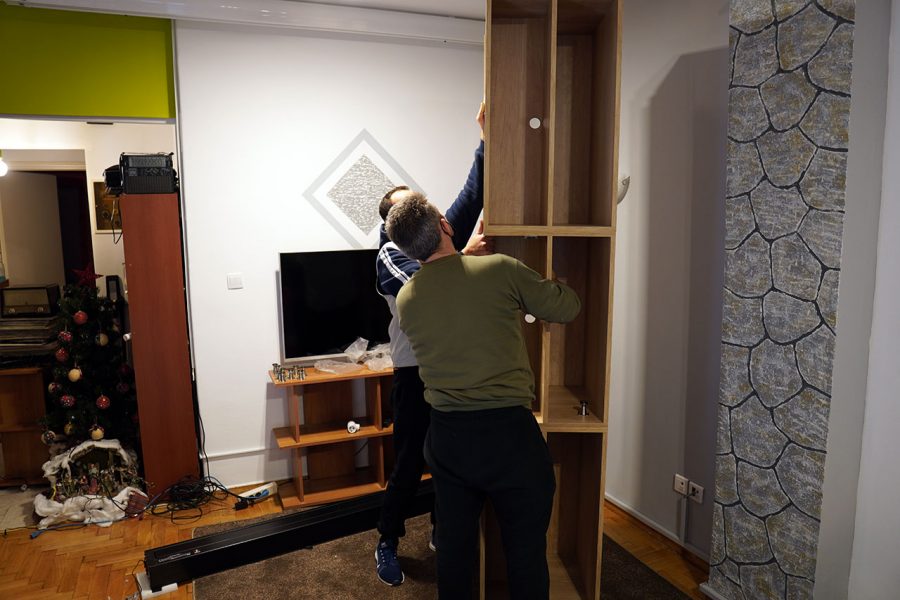 And where the cabinet had been put in place, we had the now familiar “quality” check from the well-known unknown who… seemed to give its final approval, however:) The screen matched perfectly, the cabintet seems beautiful and the projector sat just fine on its shelf… everything went exactly as planned… 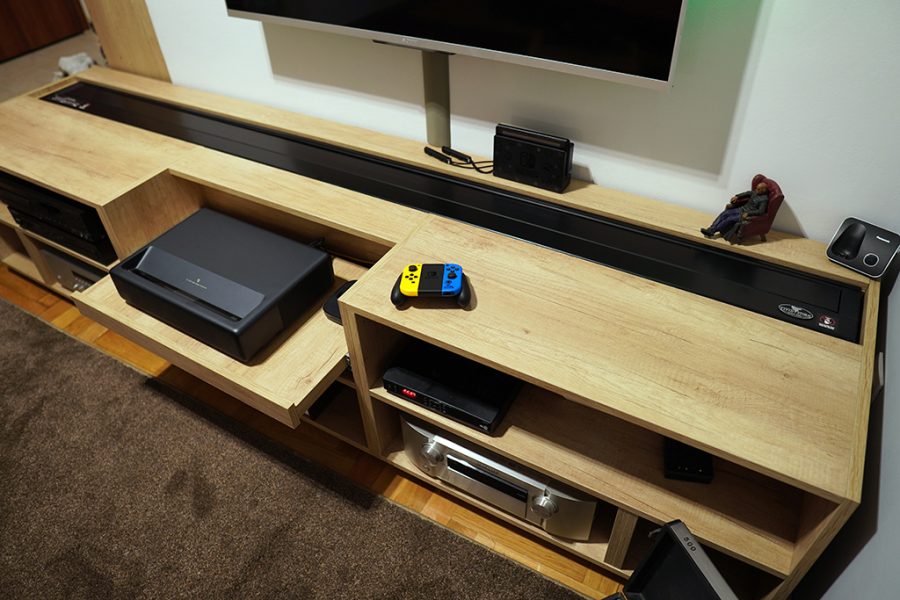 And some photos to enjoy the result… The fish are in a panic, the good observers will easily see the reason 🙂 And the 100-inch Laser TV project was completed with absolute success. The sound of course is a difficult piece in such a construction (especially in confined spaces like mine). Xiaomi, however, can comfortably perform the debts of the sound system since the sound it produces is amazing in both quality and intensity, especially in small spaces I think it can stand comfortably as a stand-alone AV system (many will mock what I say, but have never heard the sound of this particular projector i must say…).

However for now (because an upgrade is coming) the monitor audio library speakers have matched amazingly and I have to admit that the sound effect is beyond my expectations… (irrelevant but I’ll say it, I love this company because with very little money you can hear a big sound). I also made a small video for you… enjoy!

I hope you enjoyed this article as much as I enjoy making this UST cabinet.

Good views and happy new year to all of you!