4K DLP projectors have been on the market for a long time now and are undoubtedly the most economical solution if one wants to live the experience of watching UHD HDR 10+ material in his personal home cinema.

The DLP manufacture companies the mention in the specs of these projectors that their resolution is 3,840X2160 but in fact they do not mention anywhere that this resolution is not the native resolution of the panel but is achieved mechanically by a device for doubling or quadrupling the pixels that has been installed between the DMD chip and the lens.

XPR technology is what has allowed the DLP projectors of the last years to be called 4K and advertised as 4K, it is the trick of Texas Instruments we would say to give 4K resolution to the manufacturers of DLP projectors while selling them the classic DMD chip with resolution 1920 × 1080 who has been manufacturing for 10 years now, good eh?

Let’s go straight to the point and find out how XPR technology works and many questions will be answered.

For reasons of economy we will deal only with the case of DLP projectors that wear the small 0.47″ DMD chip with resolution 1920X1080 and not those with 0.66″ with resolution 2716X1528. Of course the operation of the XPR system is identical in both cases so… 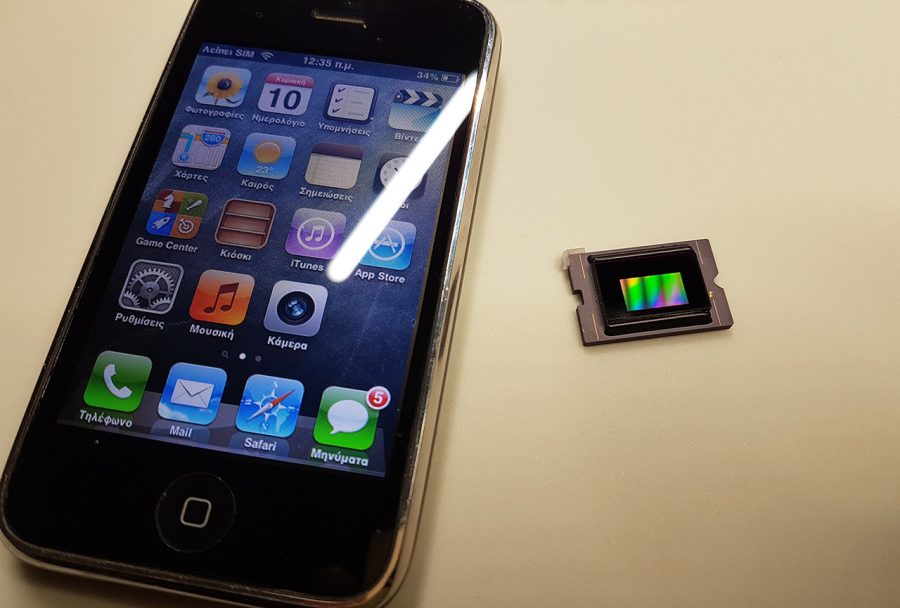 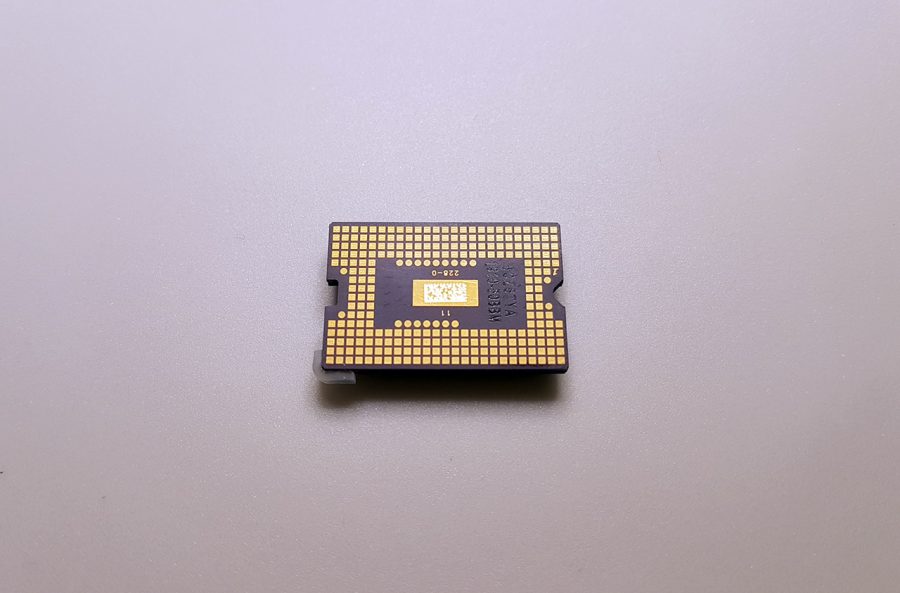 The resolution it announces is of course false since instead of 3840 × 2160 the specific chip without the XPR Module (which is a separate unit) gives a resolution of 1920 × 1080 of course.

Take a look at the refresh rate it announces which is 60Hz for 4K UHD and 240Hz for full HD, keep that in mind and let’s go see XPR.

The XPR module is a very simple device to conceive and consists of 2 main parts. The optical and the electromechanical part.

In the optical part we have a piece of specially processed glass so that it directs the beam of light that receives its call according to the horizontal and vertical axis.

In the electromechanical part we have 4 electromagnets coils that force this piece of glass to change position both in the horizontal and in the vertical axis.

In our example we will use the XPR Module XPR-25 from the Swiss company Optotune which is also the module used by Fengmi (Xiaomi) UST 4K projectors.

This is the module, at the bottom you can see one of the four electromagnet coils 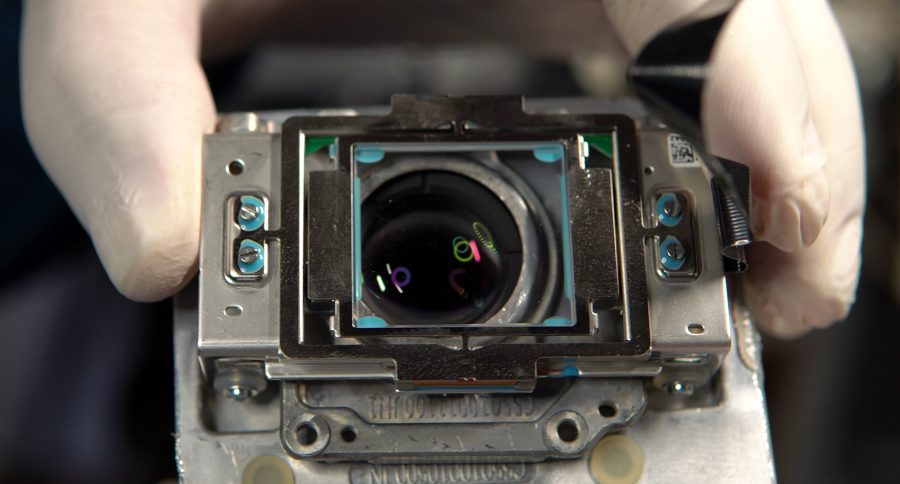 The four electromagnets can move the optical part of the module in the vertical and in the horizontal axis, right and left, that is, up and down. 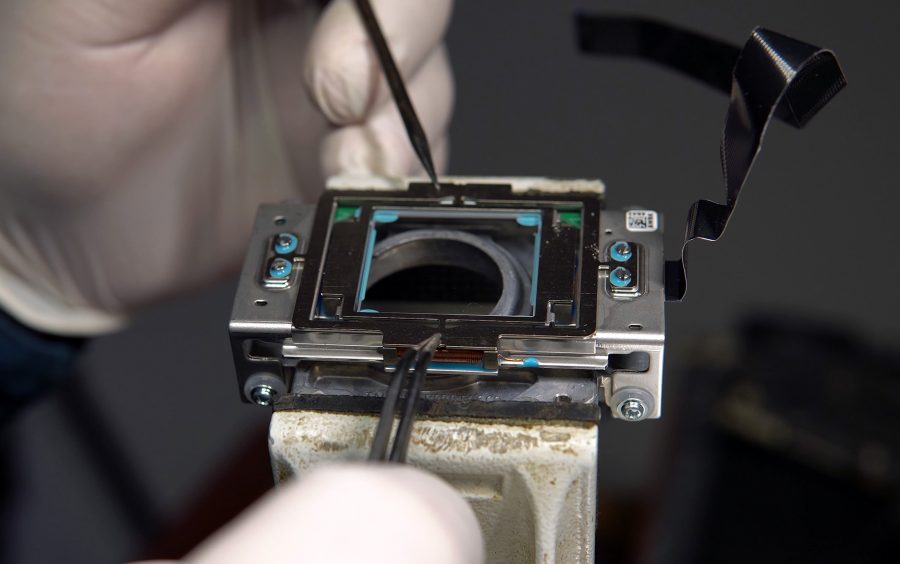 The way it works is as follows.

But it can increase its operating frequency so that it can play all the information with the existing 2 million pixels.

Thus, while each pixel can seemingly transfer 60 color information per second and display along with the other pixels the 60 frames of 1080 lines (1080p 60Hz), increasing its frequency to 240Hz, quadrupling it, then it can deliver four times color information within a second.

We also wanted to quadruple the information from the beginning so that the UHD information could fit in one second, and we achieved this not by quadrupling the resolution, but the frequency of the pixels!

Well so far someone will say, but this quadrupled information will be played at the same 1920 × 1080 pixels so our image while basically will play all the UHD information, it will not have its resolution, our eye will not receive more pixels so in fact there will be no UHD display, correct!

Here comes the XPR module to provide a solution and allow these pixels to take a different position in the image within the same second so that as a final result our eye actually receives four times the resolution of that of the DMD chip, the coveted UHD resolution.

How is this done?

The XPR module in perfect communication with the DMD chip changes position in the pixel so that within these 240Hz it is in four different positions, 60 times in each position (for each part of the four that we broke the 4K information if you remember) . This cycle of pixel movement as shown in the photo below (top-right-bottom-again-again in its original position) is essentially 60 times per second (240Hz / 4 = 60Hz).

So the image that our eye will receive in a second will consist of 60 frames (60Hz) of this “cycle of pixels” and will also receive each pixel in four different positions.

So quadrupling the pixels we wanted from the beginning to achieve UHD resolution from a full HD chip, was actually achieved! It’s just that these 8 million pixels are not exist on our screen at the same time but with a small delay between them, so small delay that our eye can not distinguish it. 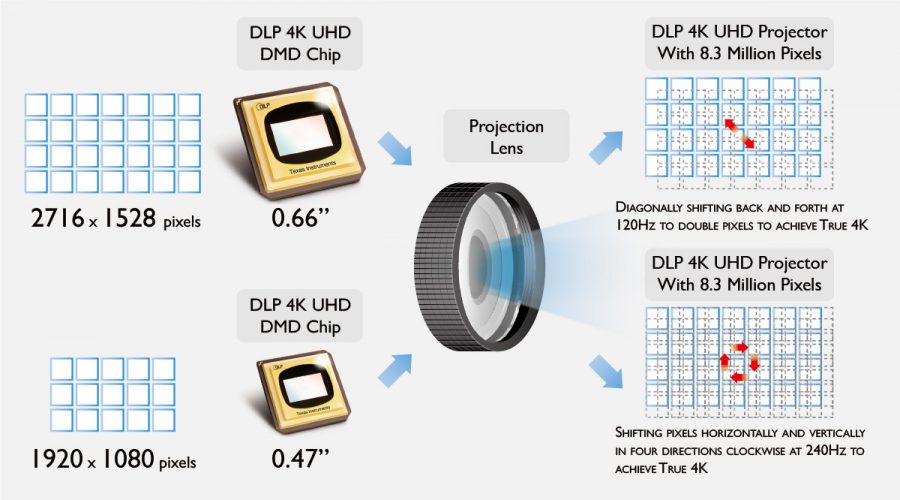 But even if we take for granted that these pixels are on our screen at the same time (since this is how we see them) another issue arises. Moving the pixel to these 4 different positions from the XPR module is done only by half a pixel and not whole pixel.

So if we want to capture it with cold mathematics of how many pixels our image actually consists of, we can only make the following simple addition based on the following photo that shows the positions taken by a single pixel.

That is, in essence, and with cold mathematical logic, the resolution that a 4K DLP projector with XPR finally displays on our screen is about half of 4K UHD resolution.

Wrong! (And if i am about to drive you crazy and it all sounds complicated I’ll tell you this, yes, it ‘s complicated!)

Wrong, because in fact each pixel of these moving by the XPR module can be moved by only half a pixel as we explained above, but for a certain time it enjoys full display on our screen so it catches and sends to our eye the whole information it carries and not half as the math above indicates.

That is, while in essence such a 4K DLP projector typically does not provide UHD resolution, we in our eyes as a final result receive a UHD image from our screen. Did I confuse you even more? I know i did…

Are there any disadvantages to this technology?

To begin with, i have to say that such a slight movement of a pixel requires tremendous precision in the assembly of an optician and very good quality of construction in order to give the maximum performance.

That is, there is a case from model to model and while using the same XPR module to find differences in clarity, resolution, contrast, etc.

Even the XPR module itself in its features reports accuracy +/- 8%.

8% error in moving a pixel is not a negligible amount in the end.

Also another disadvantage of this technology is that these projectors are forced to play always and everything at 4K60Hz, even if we supply them with 24Hz material (unlike the pixel shift from JVC for example which can and does work at 96Hz ( 24 x 4 = 96) for the 24Hz material)

Finally, perhaps the most important drawback is that the 4K DLP projectors using the XPR module between the DMD chip and the lens can no longer manage well the light that we never want to reach our screen,  resulting in reduced of native contrast.

It is no coincidence that all 4K DLP projectors deliver half the contrast of full HD DLPs.

I also made a small video for you to see in practice how an XPR module works. Many questions may be answered once you watch it…

After all, are the manufacturers of these 4K DLP projectors telling us the truth that their resolution is 4K UHD?

Yes and no, that’s the answer…