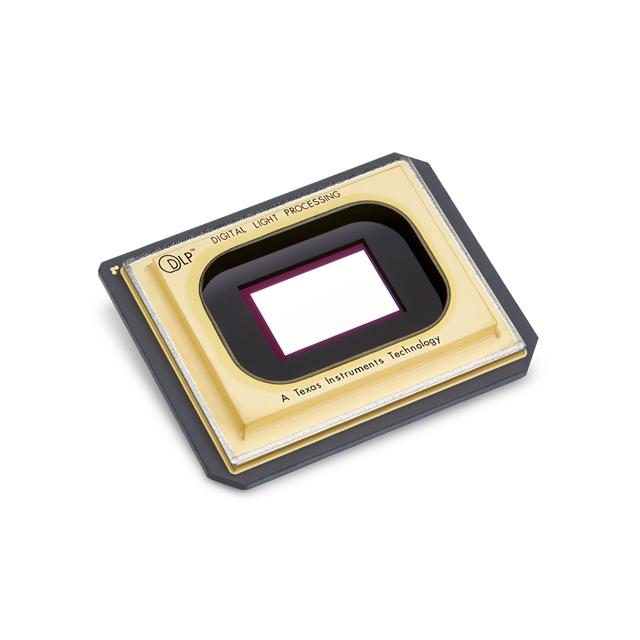 The history of DLP technology go away, back in 1987 when Professor Dr. Larry Hornbeck was completing its study on a digital device mikrokathreftwn.

She argued the Texas Instruments, an optical semiconductor device capable to direct photons with unparalleled accuracy. DMD Chip known To us.

The first official announcement of DMD chip was made in 1995 and 1996 came on the market the first projectors that made use of this innovative product, agitating the waters in the world of digital projection with the huge improvement in the picture that brought with them.

Since then followed a decade of continuous evolution from Texas Instruments and other manufacturers who make use of chip in their headlights.

The last Chip DMD of Texas Instruments announced on September 6, 2007 under the name dark chip 4. Expensive chip that was launched in 2008 and who made use of a little expensive models (infocus IN83, SIM).

# Pretty impressive considering that 4-5 years later, with the new Epson D9 ‘s panel that he wore in TW9000, slightly higher than number in native contrast (a little over 5000:1).

From 2007 onwards, the Texas Instruments was shrouded and essentially hinted that stops the progression of chip, by passing in essence the whole burden of development, construction companies headlamps did make use of the chip.

This doesn’t mean that DLP technology projectors have stayed behind in picture quality, otherwise we would say. There are areas that even the most expensive models of rival camps, bowing.

Maybe it has to do with the fact that until a few years ago the image attached the DLP projectors were “very ahead of their time”.

What characterizes the projectors DLP technology is the simplicity of construction. Simplicity that results in huge reliability and durability.

The function of the optic is their unique simple for data of rival camps. 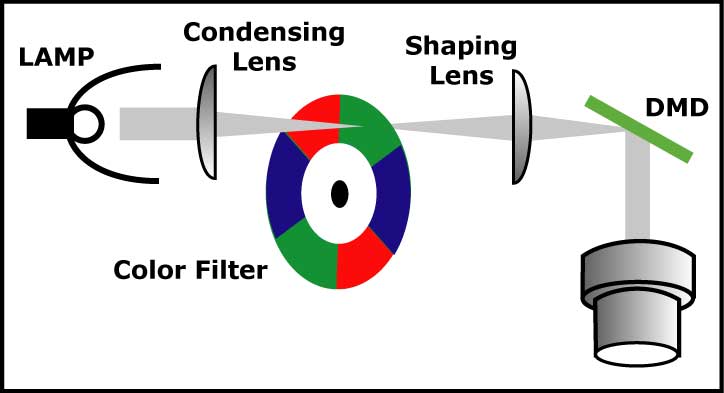 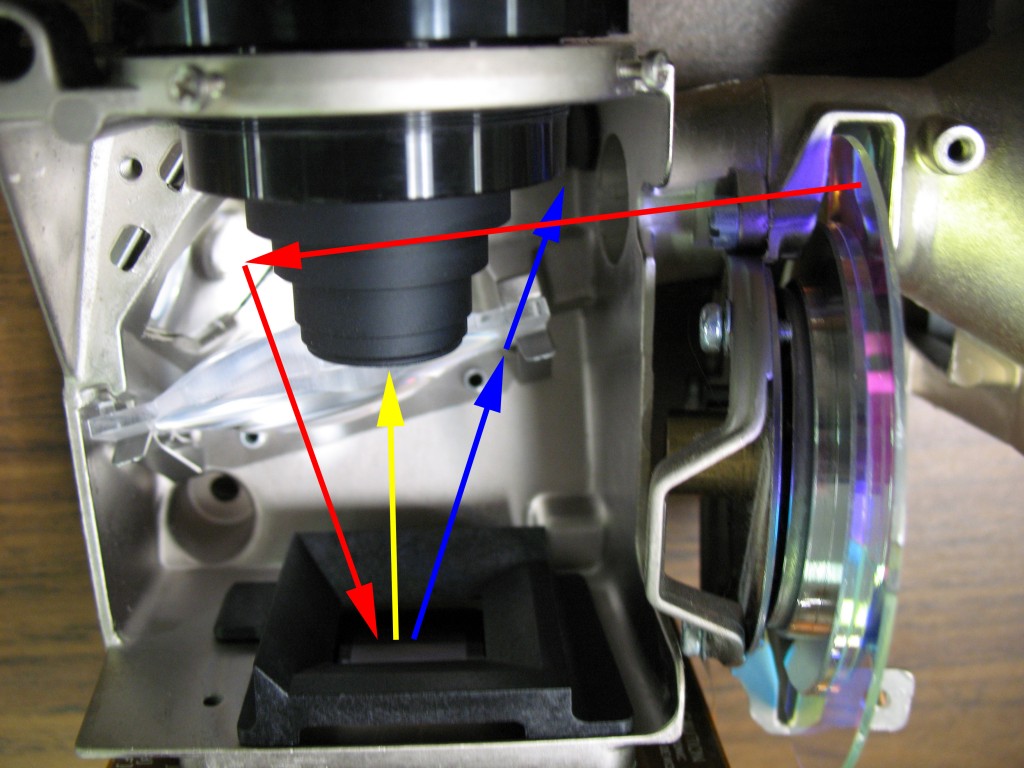 In a DLP optical projector won’t meet polarizing and dichrwika filters. Neither prisms and lens arrays, in relation to the other technologies the sight is simple, small, compact and sealed.

The light passes through the color wheel, color, reflected on the DMD Chip and through the lens arrives at our cloth. So simple!

Now let’s look at some of the advantages of a DLP projector.

Another great advantage of the DMD Chip is the very high aperture ratio, over 95%.

What does this mean, that 95% of the image is composed of pixels, and the gap between them occupy only 5%. To understand the numbers, suffice it to say that the latest generation of LCD panel 3D D9 Epson have aperture ratio no higher than 65%.

Namely, in substance to our screen, using DLP projector clean our image will occupy 95%, while in the case of LCD will occupy only the 65%, with the remaining 35% actually is empty. This has an impact in all areas of the picture (most famously in the screen door effect phenomenon).

Below you can see the difference between LCD (left) and DLP projector (right) on the issue of aperture ratio of two technologies. It seems clear the very large gap between the pixel of the LCD (left) and the almost nonexistent in DLP (right).

After we covered the positives of DLP technology, let’s move now to the negative points.

H truth is that DLP projectors have their future ahead and many things to offer to the world of video.

Especially after changing pricing policies of Texas Instruments for its customers (dramatic price reduction), the DLP is here and claim a very large slice of the global pie sales.

Judging from the new and very loud other inexpensive DLP models, that slowly make their appearance (Benq W1070 for example), then predict a serious battle between the camps of the three technologies (DLP, SXRD-D-ILA, LCD), with DLP to add another weapon in their arsenal, the low cost of acquisition.