Why … size does matter! 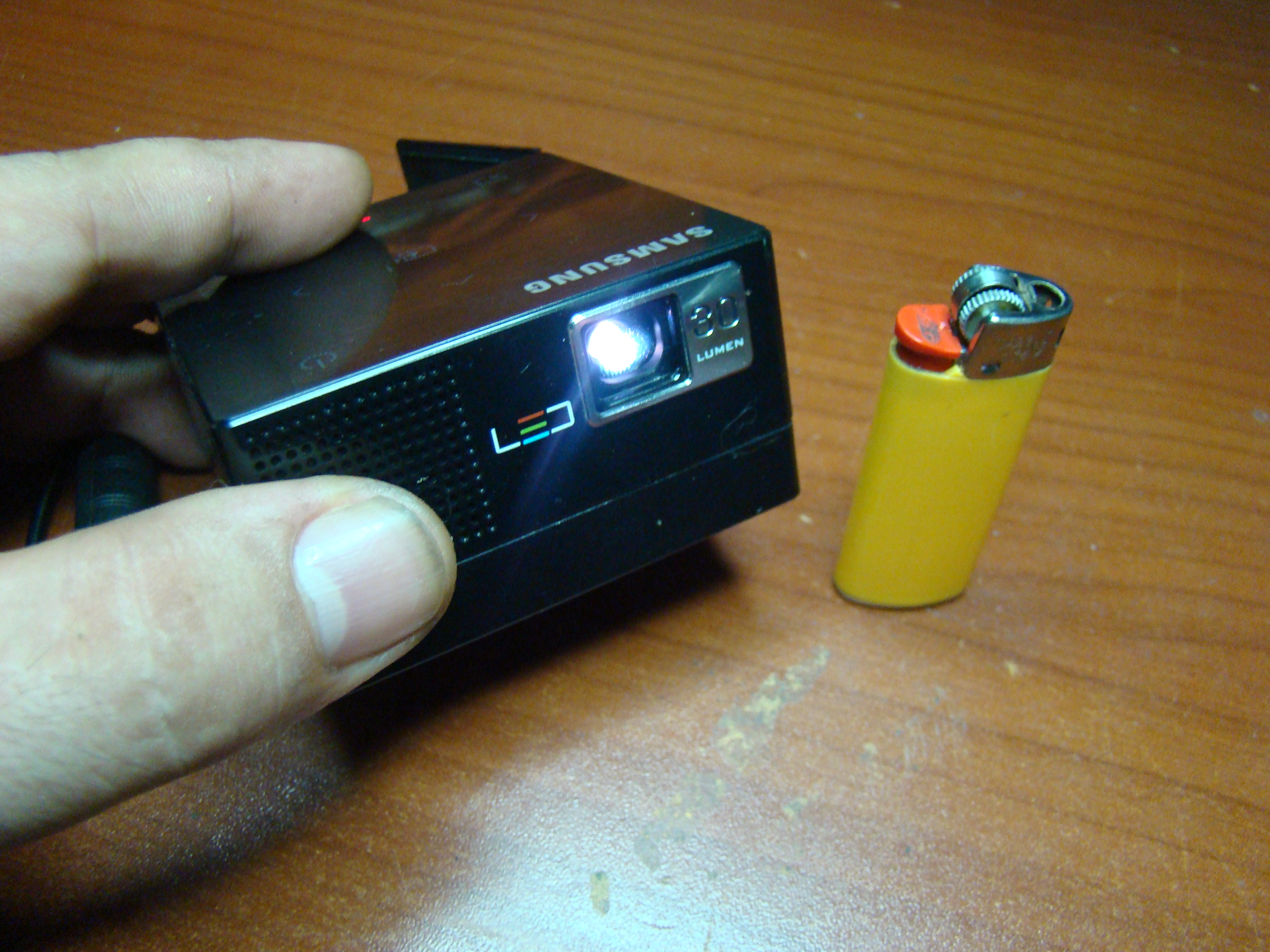 Go time released the first “beast” projector on the market, other we haven’t had a chance to see him up close and to evaluate.

The time passed and as by magic fell to us one of several longer models “beasts”, with problem, and started dealing with him …

Talking about the enormous model of the Samsung SP-H03, with abysmal brightness of 30 ansi … also known as Pico projector!!

Impressive? What we thought and we …

Let’s start … how how small is the projector … incredibly small … 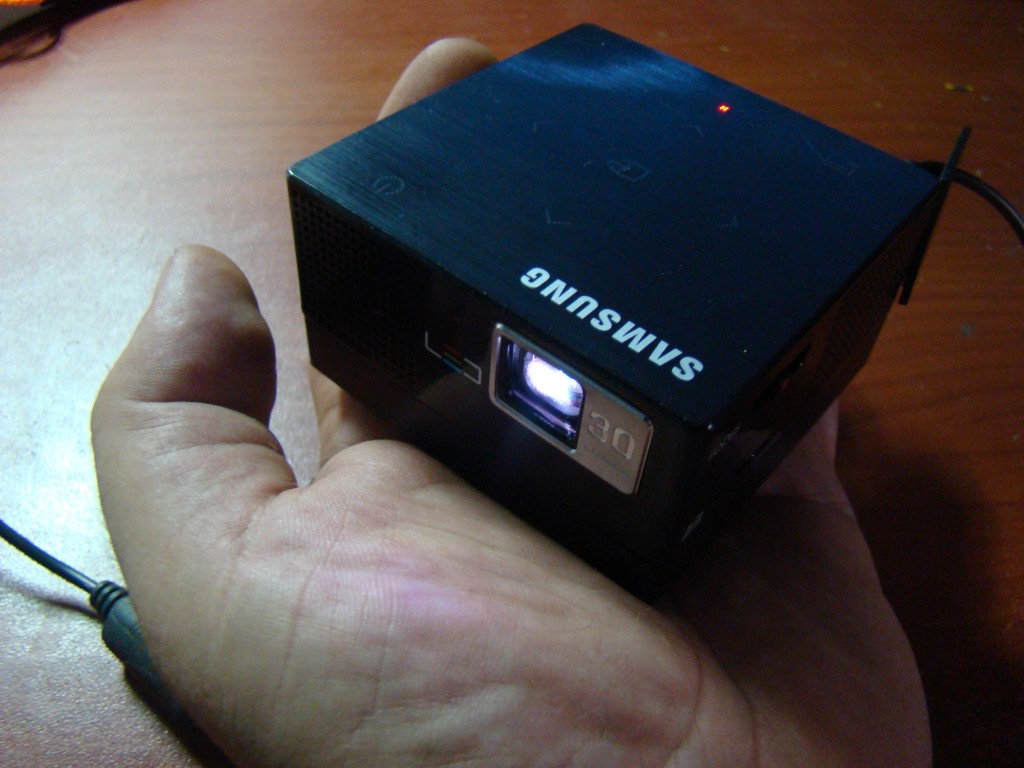 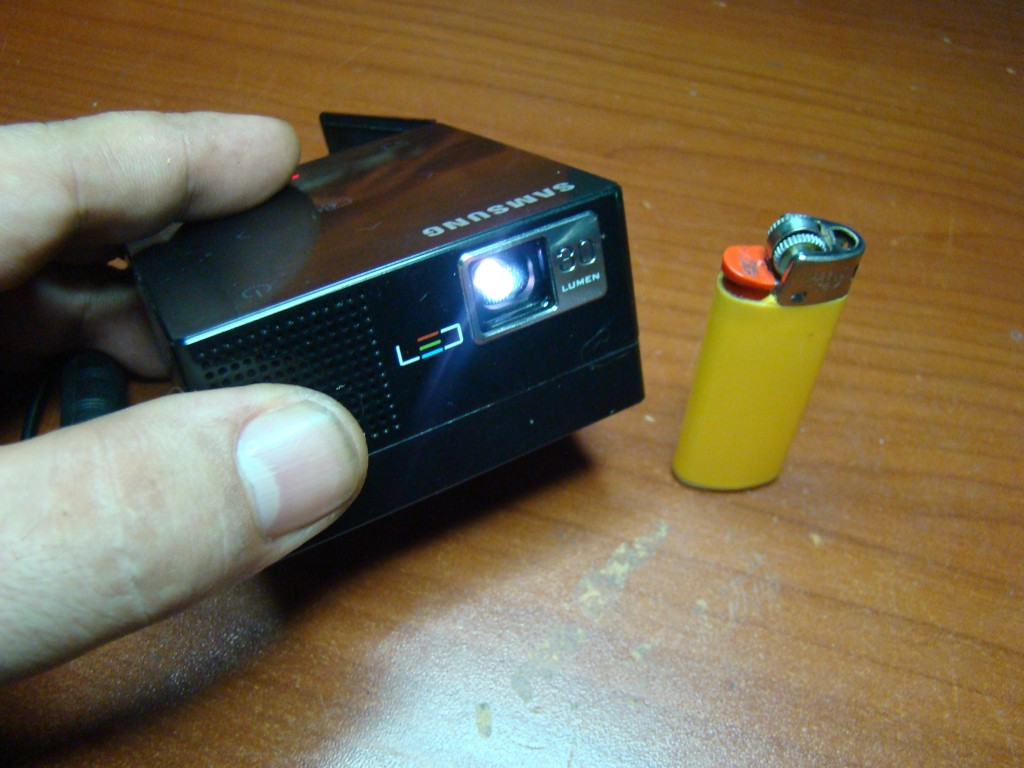 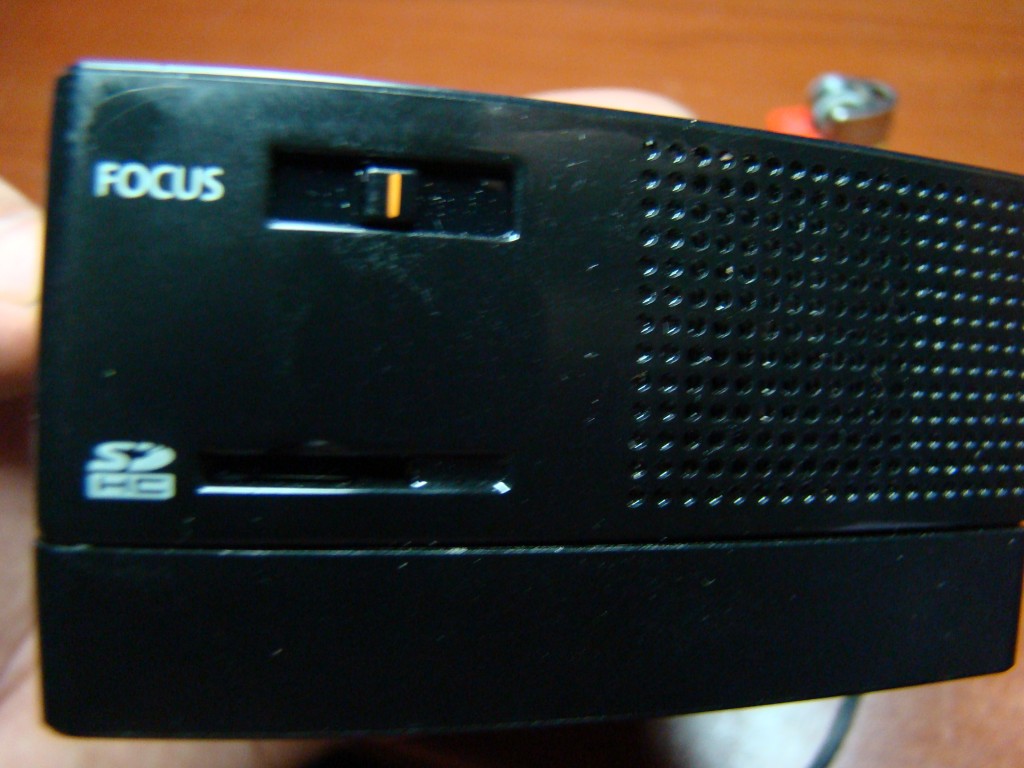 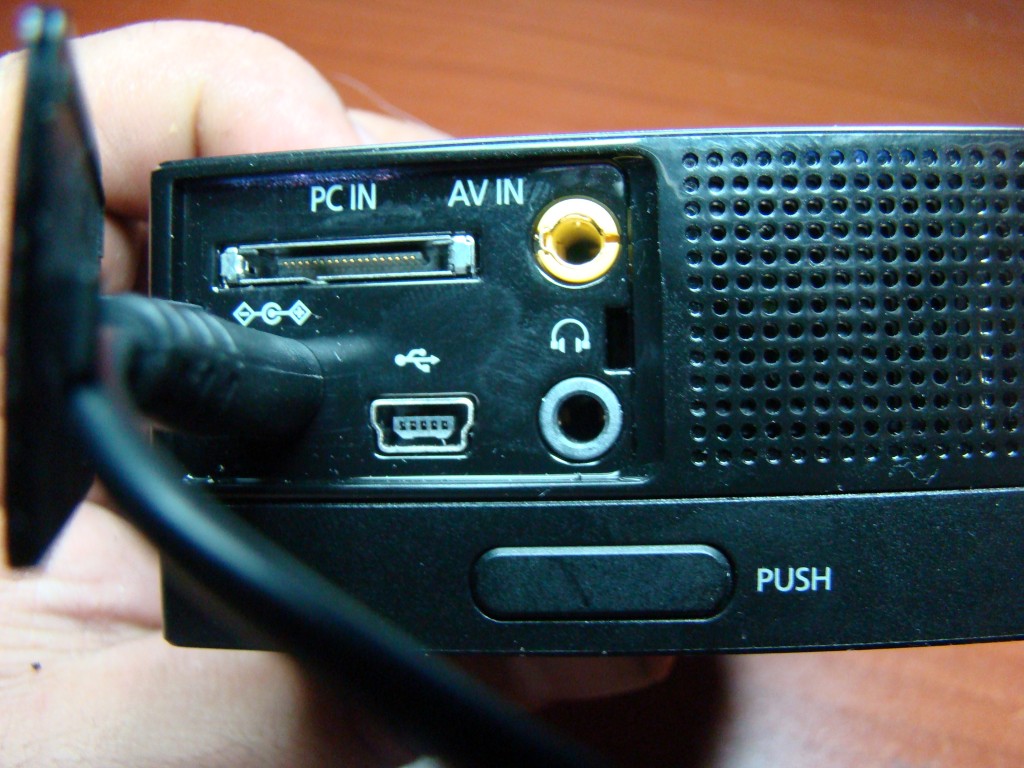 The controls are at the top and even touch! 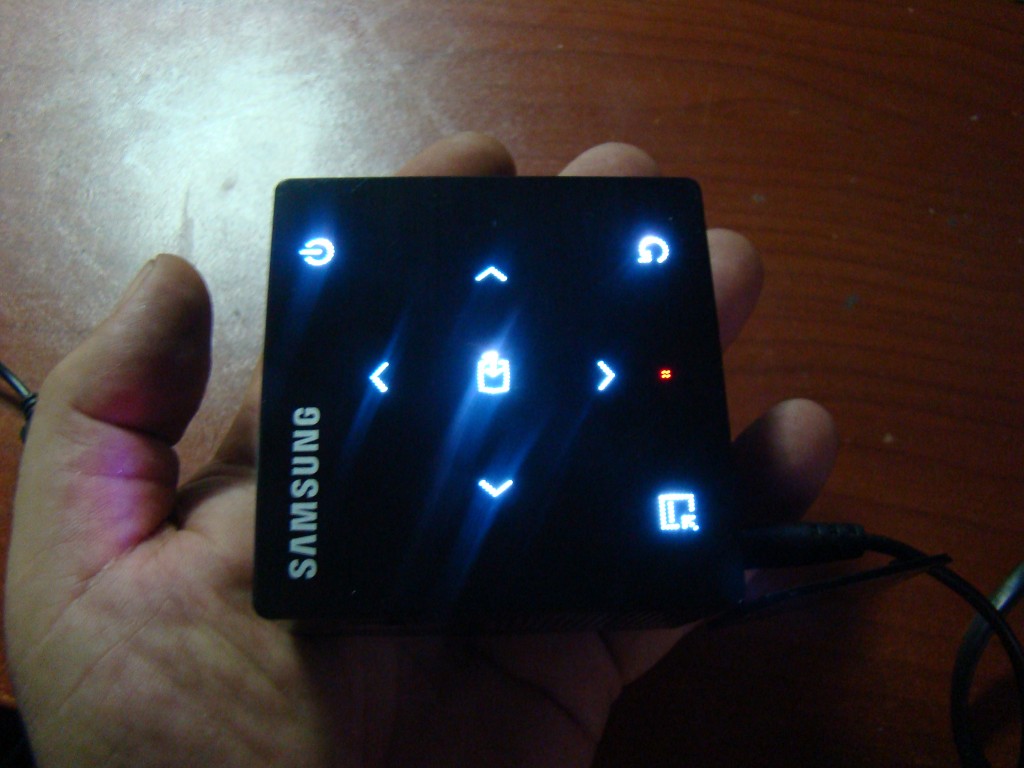 Having rehabilitated the injury on board and managed to celebrate him for the first time … We noted with regret that there was another problem involving the DMD chip. The familiar white dots that suggest glued mirrors on the chip. Terribly hard to find because there is no chip on the market, let us be good friend colleague on the other side of the Atlantic that has served us and the chip is on the way … (the “instrument” is Greek patent … We said … 🙂 )

Once the projector repaired fully, will pursue a full review, and his team will projectorjunkies gather at HQ and xepsachnisei literally with a full set of metrics from our organs are expensive!

But for now, let’s take a glimpse from Monster’s optical … 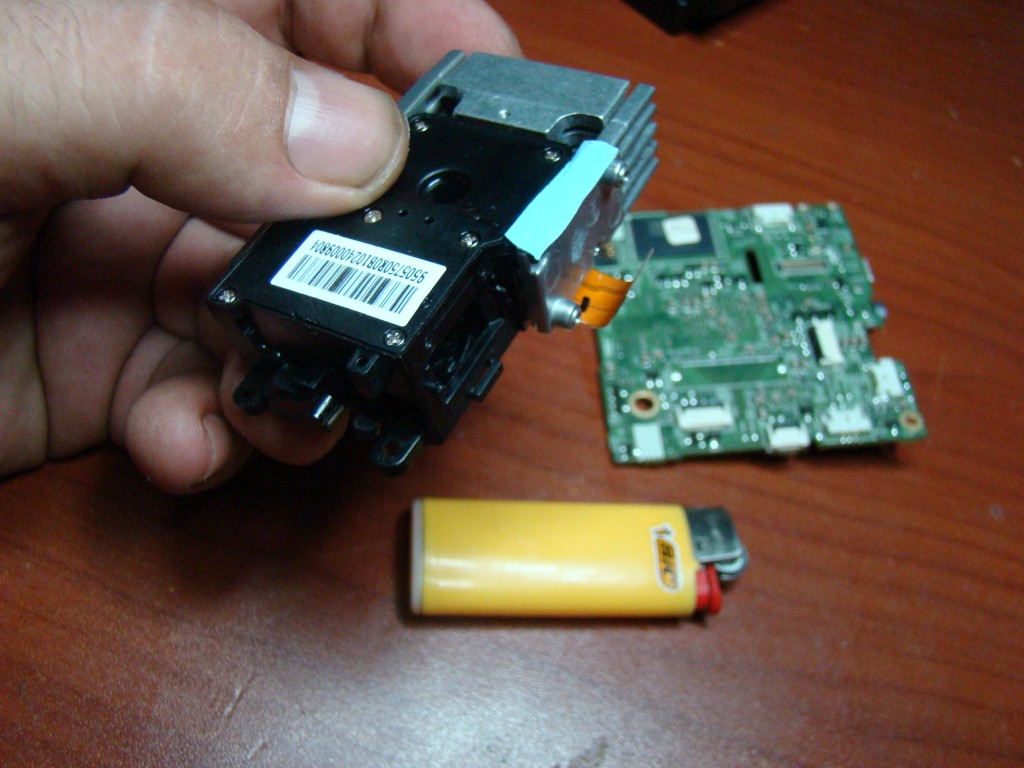 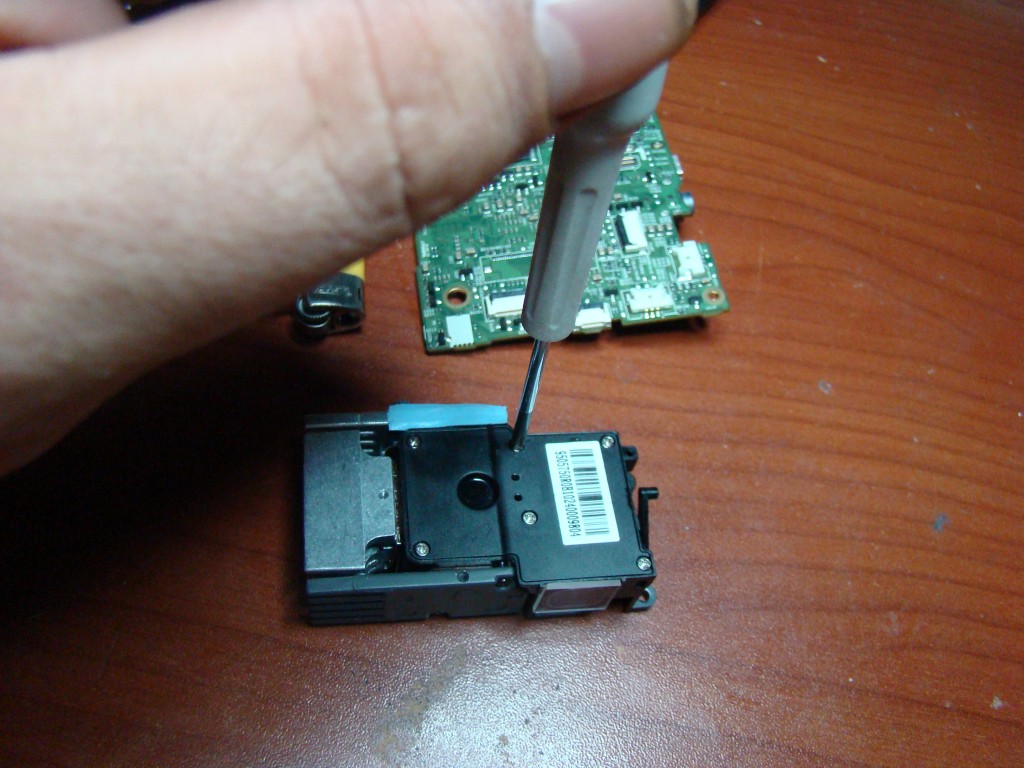 Huge? With surprise that inside there were three optical LED each has assumed the role of broadcasting one of the three primary colors (blue, red and green). Incredible construction in so little space! 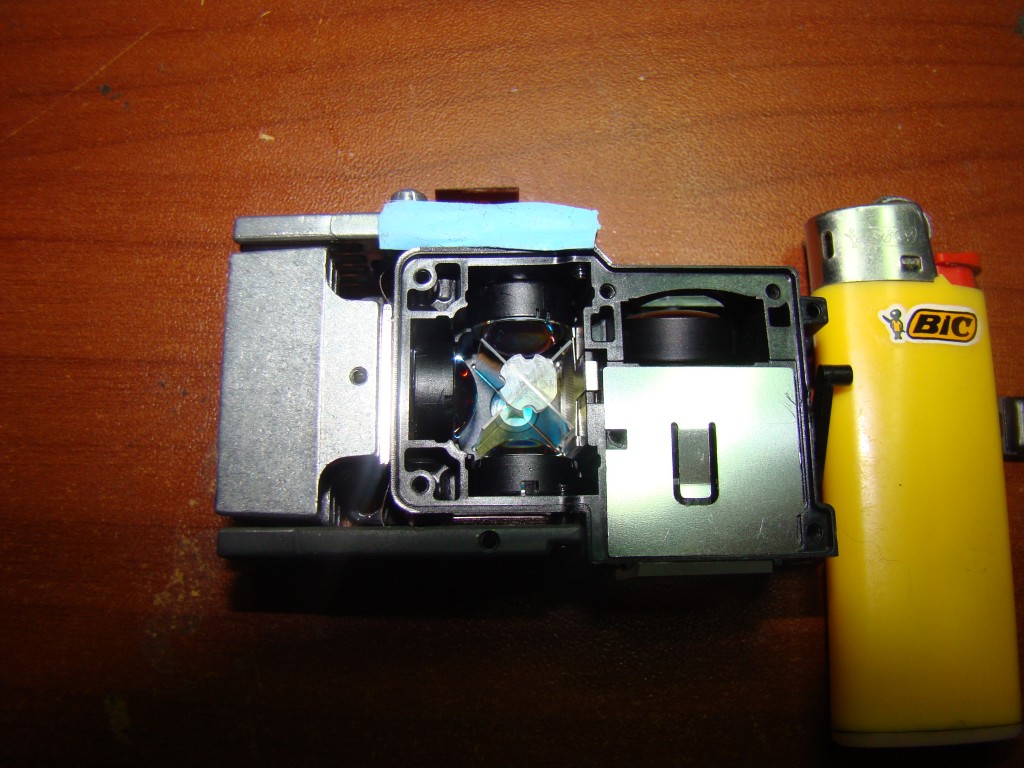 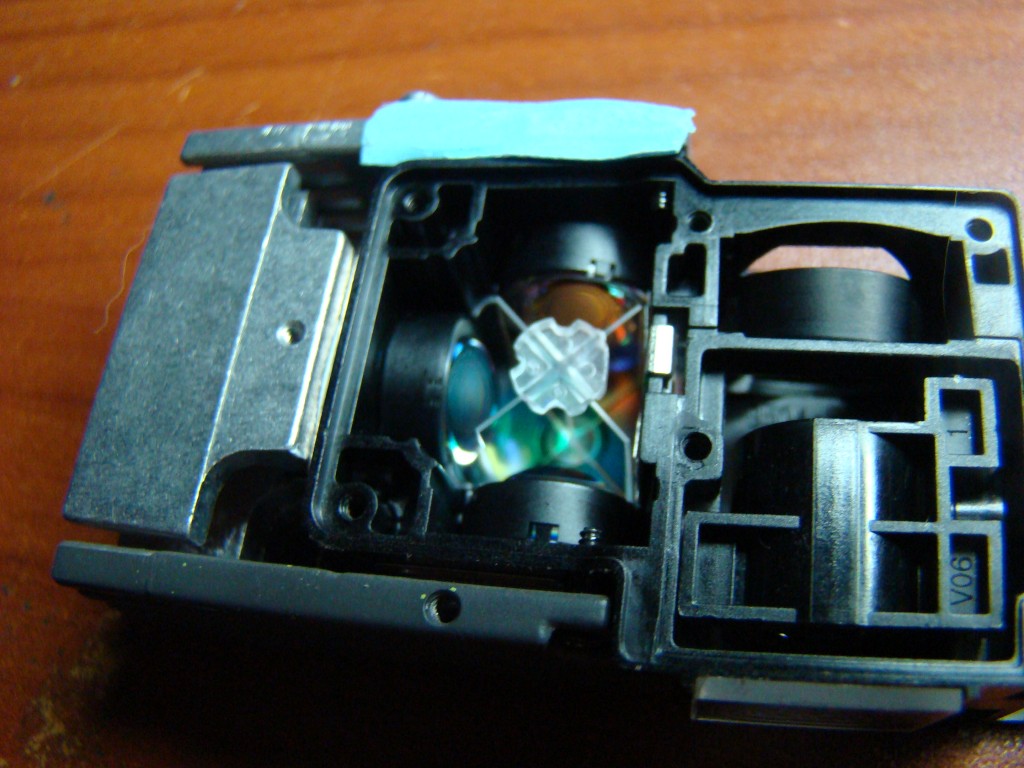 The surprise, of course, came when “caught” for the first time the DMD in our hands … the pico gen2 DMD of Texas really no. .. 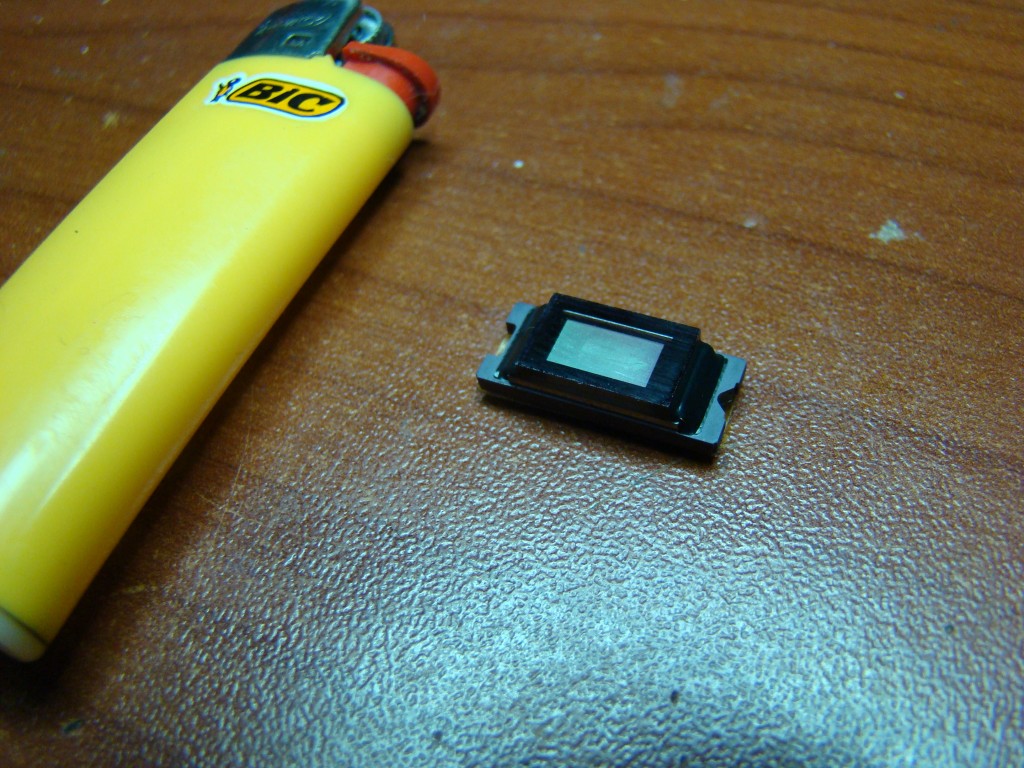 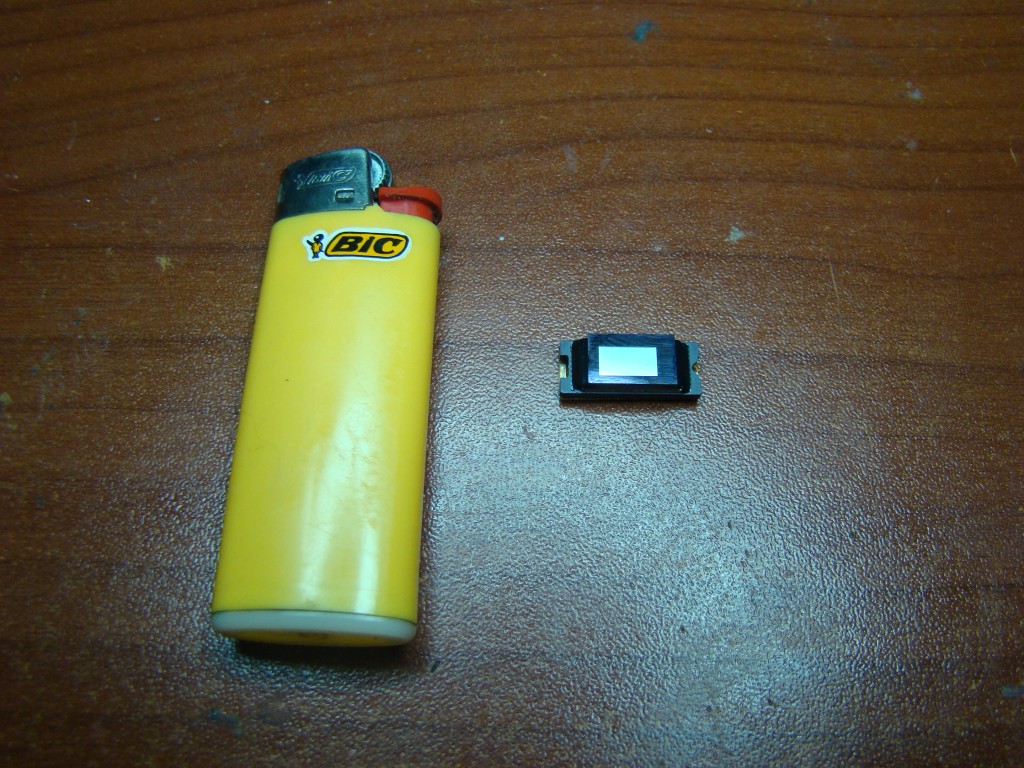 Really impressive … Here is what we say … “size matters”

Natural curiosity about how he plays this tiny technological gadgets was great … and despite the “damage” they had entered the DMD tempted him to try.

For source we used a satellite receiver and drove the pal signal via video to the projector. 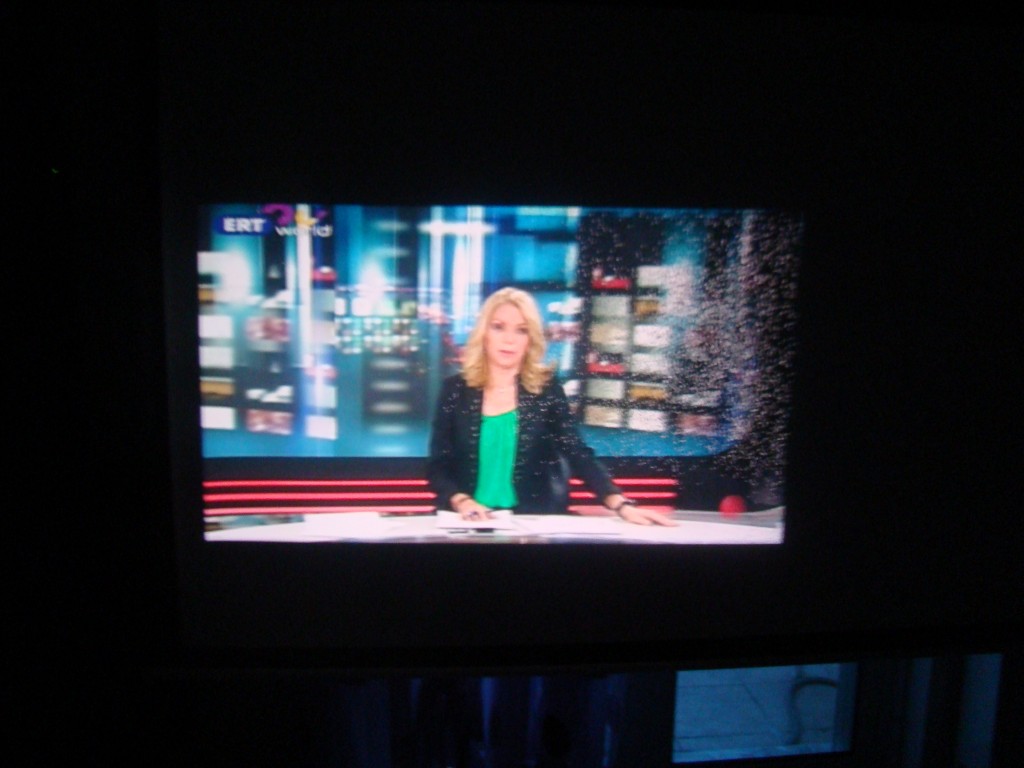 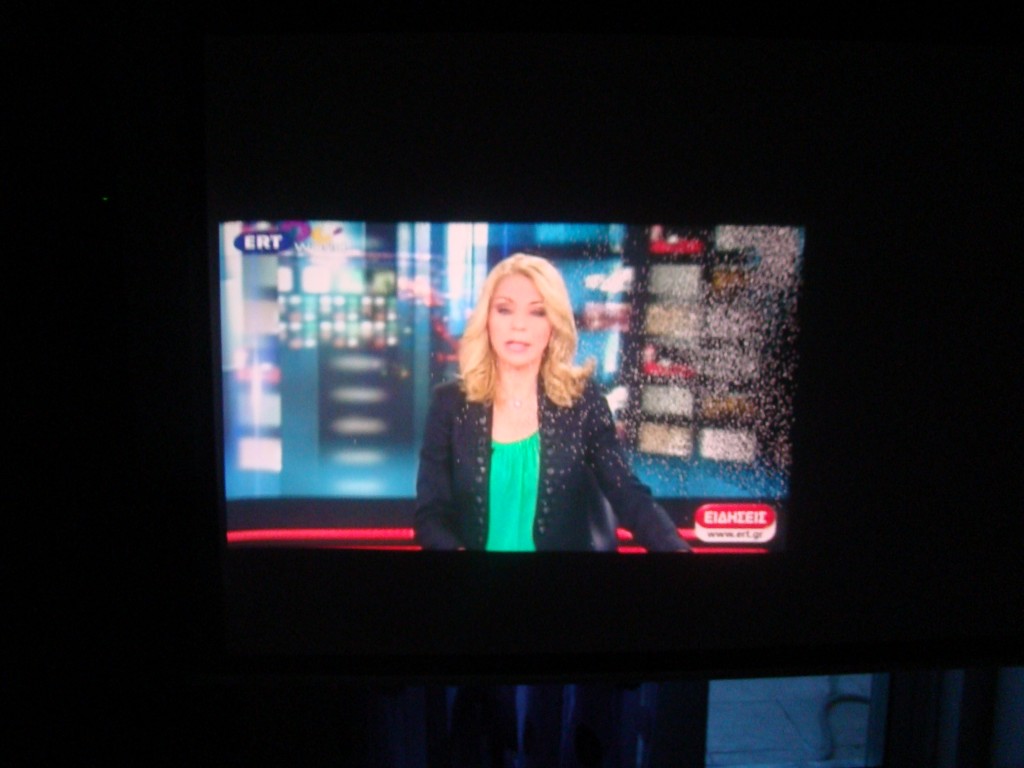 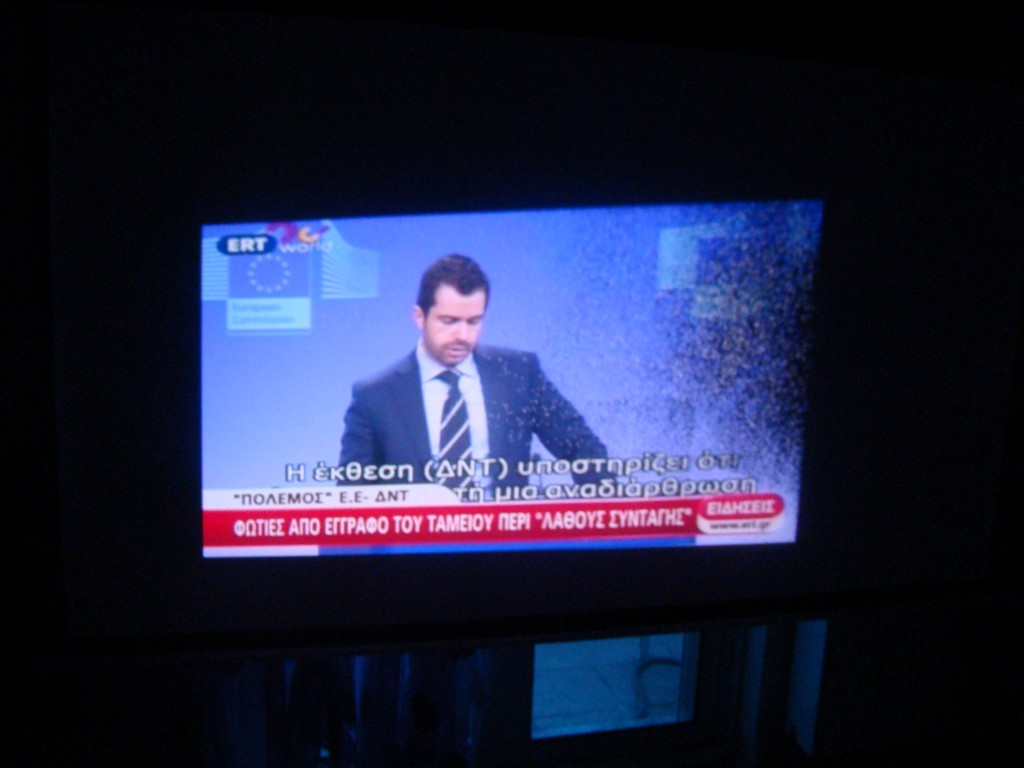 The inches we opened was somewhere in the 50 ‘s, other projector can open up to 80-90 before you terminate the slider of the focus of the lens.

Honestly should be the brightest 30 ansi we’ve ever seen. The film screening, photography or video at 50 inches that the tested done seamlessly with other light and amazingly … good picture!

Although it is apparent the white symbols of problematic pixel chip’s … We couldn’t believe that we see so many inches from a device that fits comfortably in the Palm. and playing with battery!

No we didn’t … like children turn the projector to any direction and take picture everywhere. 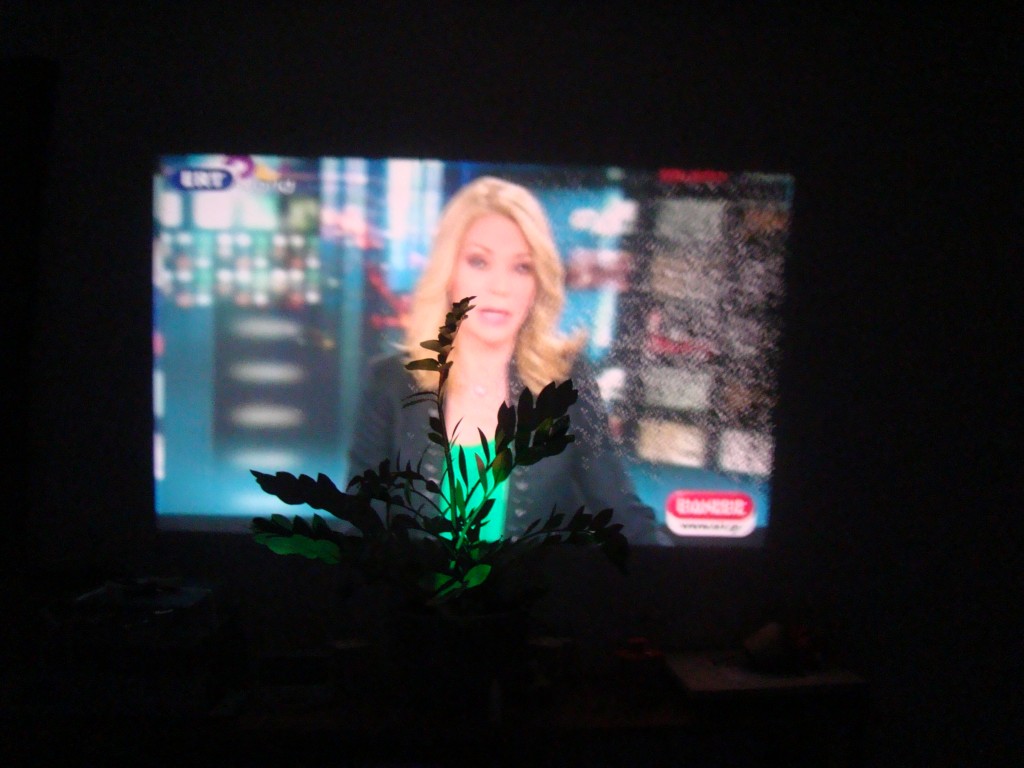 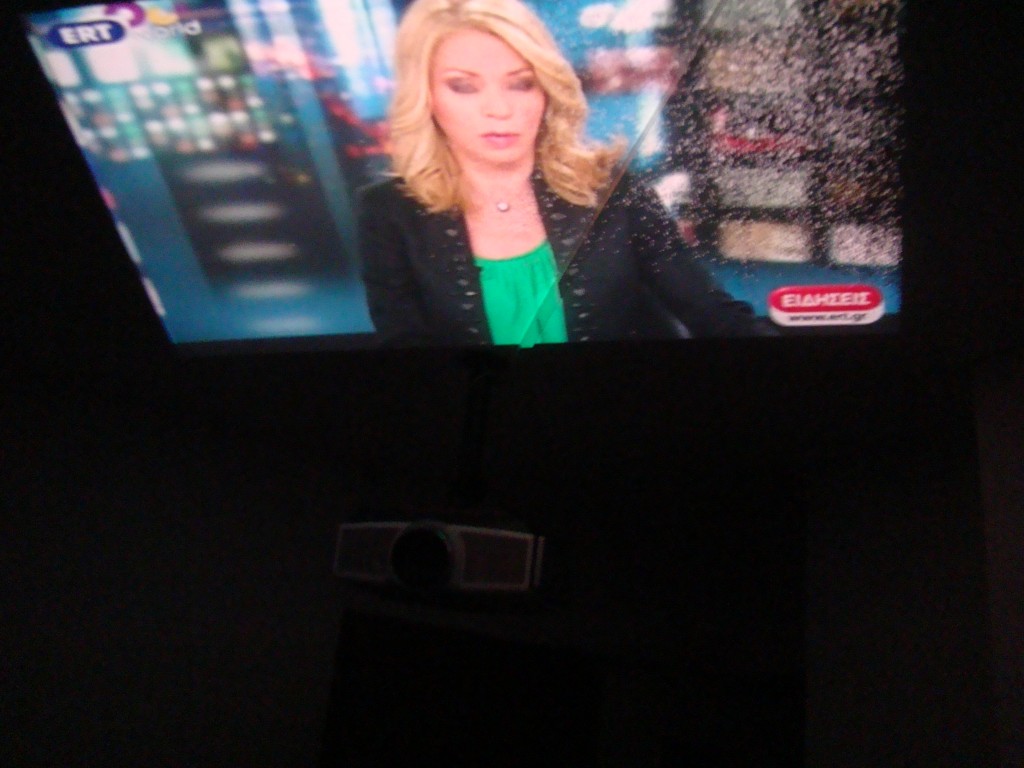 It is very addictive that you can take with you on vacation, episodes of your favorite series, inside and on your mobile with this “Matchbox” to make viewing … at camping … at 80 inches … (understand that this way will do snap and weak sex … and of course it will be up to you any further development. E.g. “at home I have a larger … What would you say to come to see him? “, etc.:-))

A. .. and one last thing …. the built-in speaker’s working famously!!

What to say … We ethistikame.

We finally found the projector for the unique place we haven’t!! And for those who understand … finish the magazines and the newspapers!!!

We said we are sick binteoprobolakides … What to do!  🙂

Tip: In this room don’t begin to see e.g., LOST! There will be serious problem with other members of the family!

Beyond the plate, you ask someone: That was me useful a Pocket projector?

Living longer on elevator acquires new meaning! Even in small that can fit 2-3 people … 30-40 intsoyles the got to kidding!

Wait with others in dental Salon … throw in 60 inches last episode game of thrones (ninth) … and … cry together …..

You’re in the queue … IKA VRE BRO … find wall olive-green, skatoyli, beige (don’t ask why … There he plays best a projector … We know) … Open 70-80 inches and throw videos found on youtube mobile media (free wireless internet IKA … Okay … Here the paratrabixame …  🙂 ) preferably before the elections of Samara to talks about development … through becoming popular … and do your work in time dt!

We can imagine many more … other ones not already enough? Not to get even? E then you’re skeptical … 🙂

And of course … good views of my friends!!