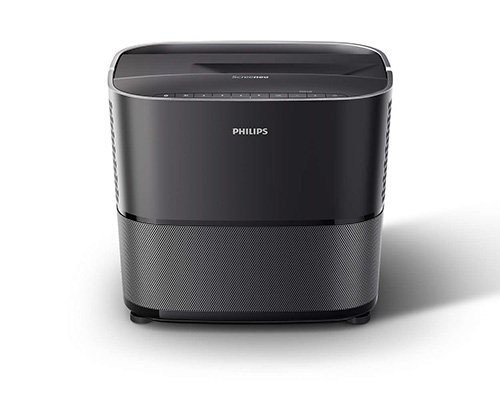 The Philips unveiled a while ago the big brother of the ultra short throw projector home cinema of Screeneo, adding just a 2.0 at the end of the name. The new Screeneo can follow the same philosophy as the model on which it was based more on the inner workings of found a completely new projector.

Three are the most obvious differences of Screeneo 2.0 from the little sister’s, the analysis (1080p instead of 720p), the light source (high pressure bulb instead of LED) and the size nearly doubled.

For some the use of high-pressure bulb instead LED may appear as “reversion”, but it is not. The particular technology of the Philips bulb develops years and the need for very light and large display (120 ‘) essentially forced to remove the source LED from this model.

O screeneo is approximately double in size compared to the little brother …. 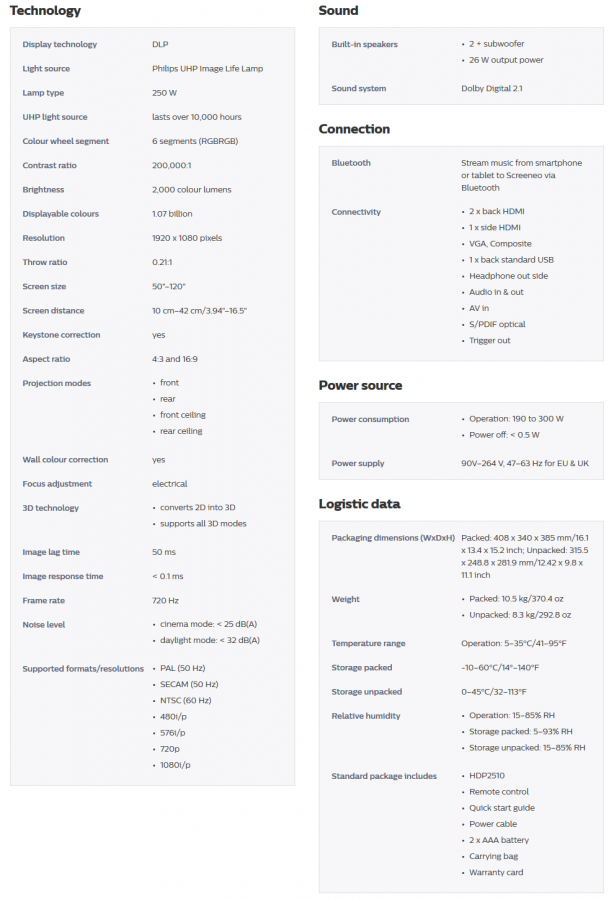 The projector has a shape of a small suitcase 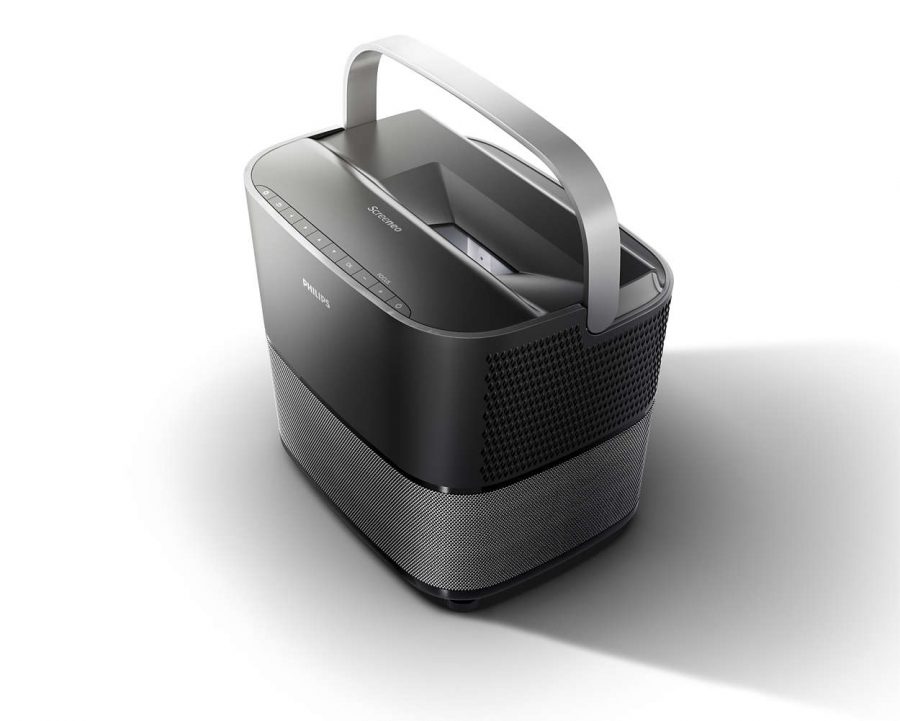 The ultimate multimedia tool that is for someone who wants everything in one device, is fond of big picture, he don’t like installations or his space is too small.

All you need is free wall … how not to love … 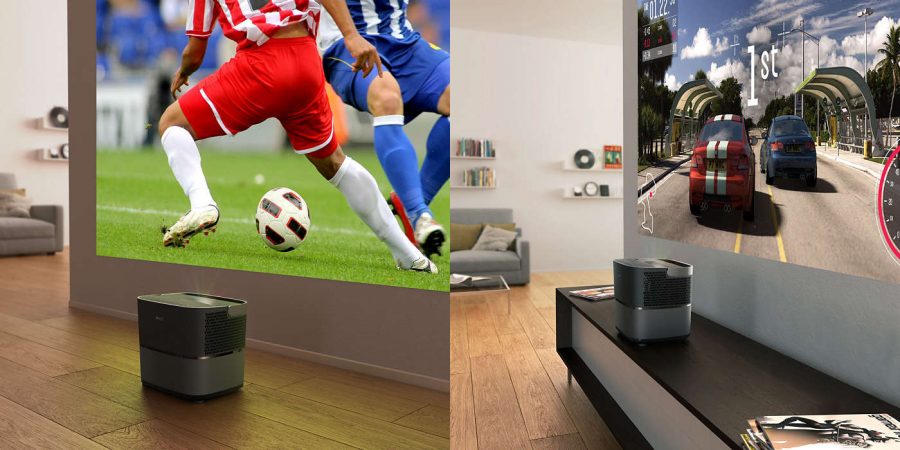 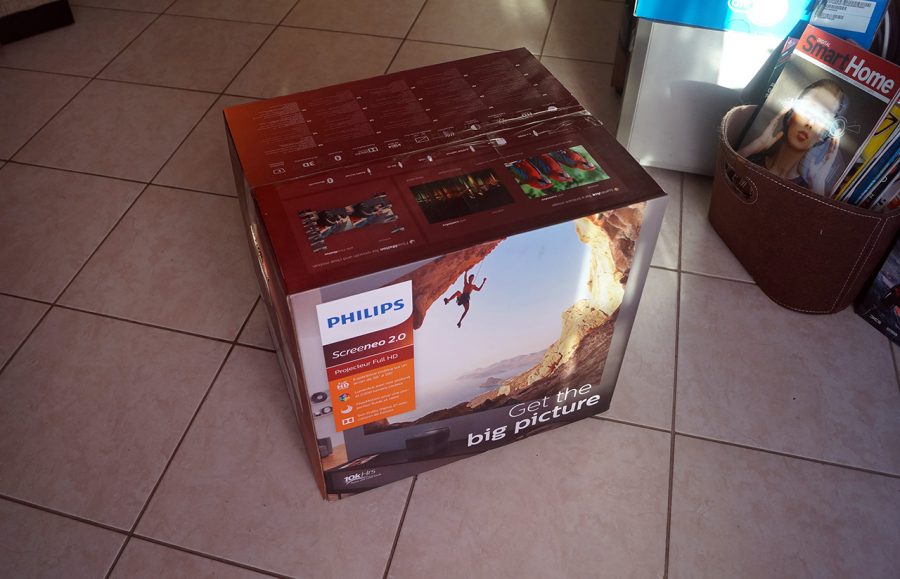 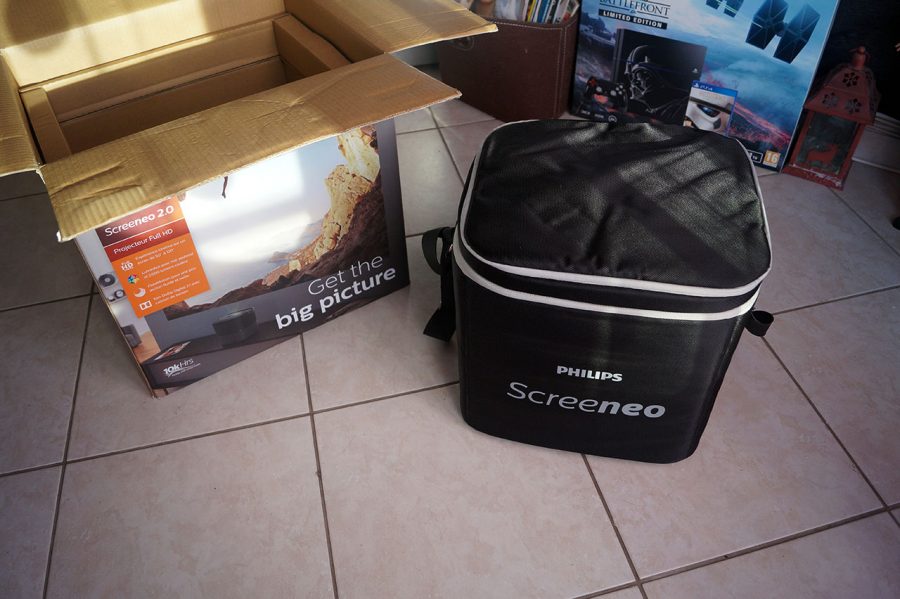 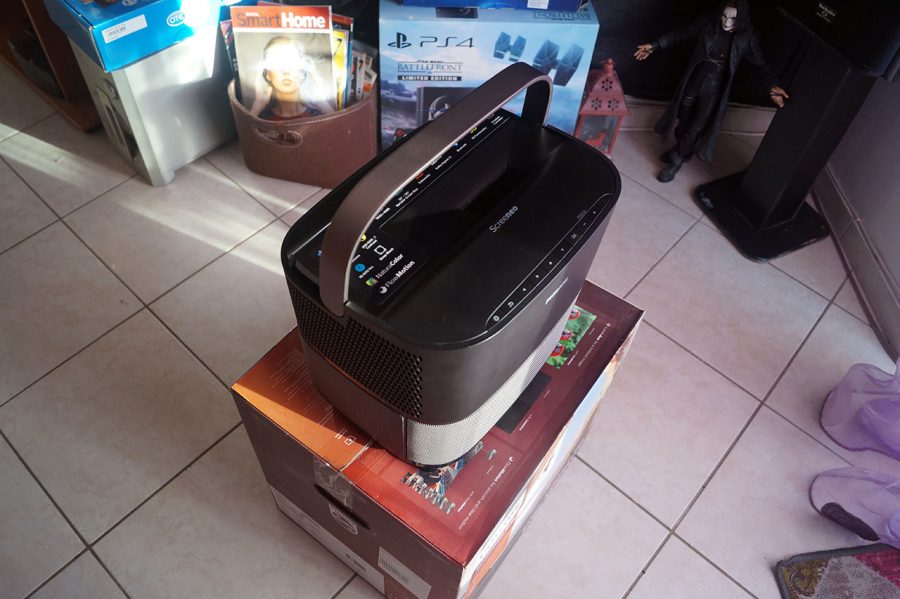 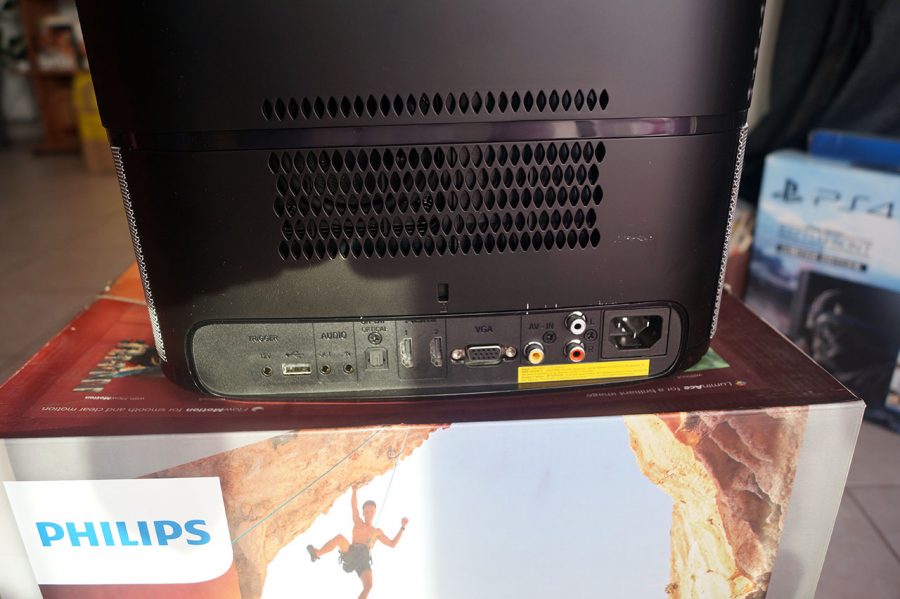 Changing the lamp is easy to screeneo 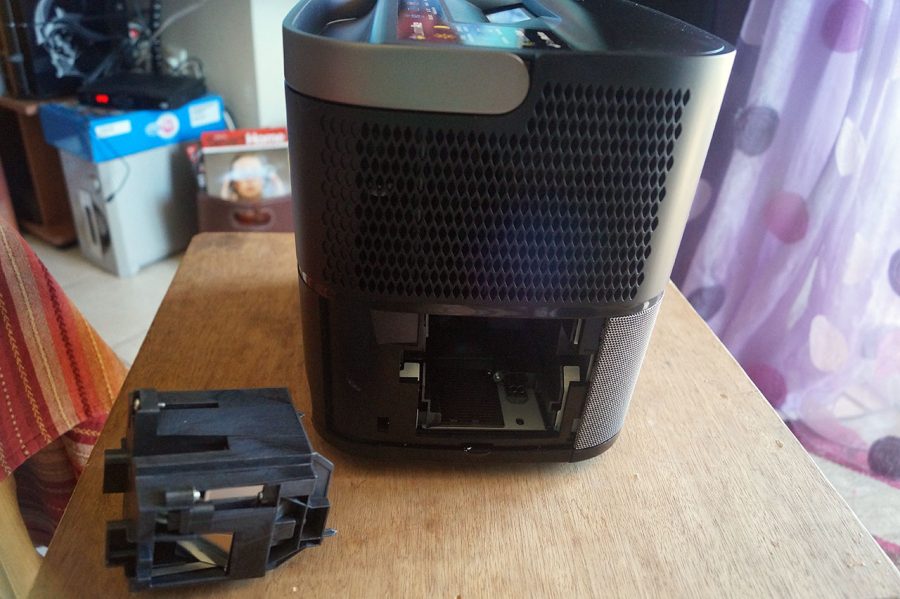 The remote control is unresponsive, but is small and the build quality is good 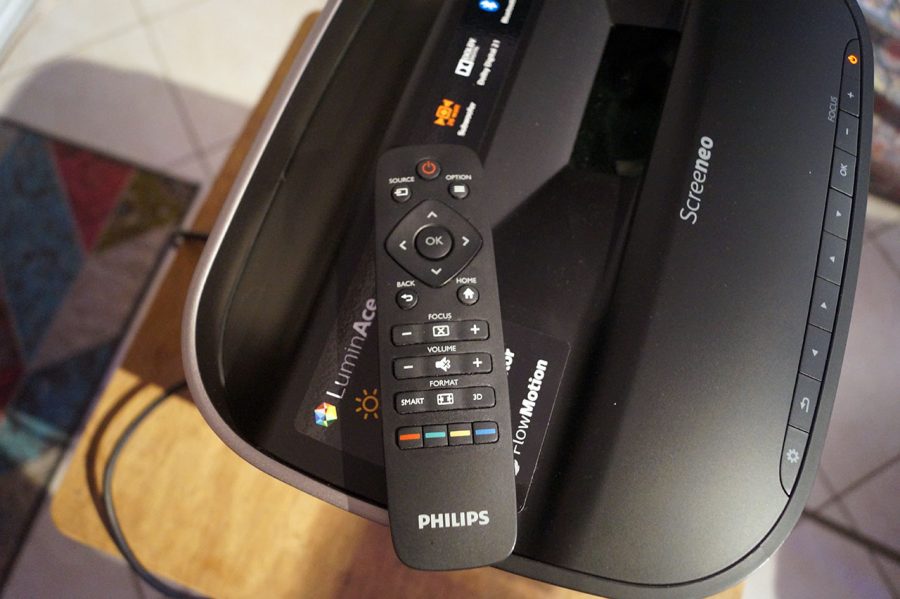 The problem that I encountered when I decided to set up and test the screeneo that have not been available in wall sized to view at least 80 inches, so I had and I set up temporary opposite electrical my screen. 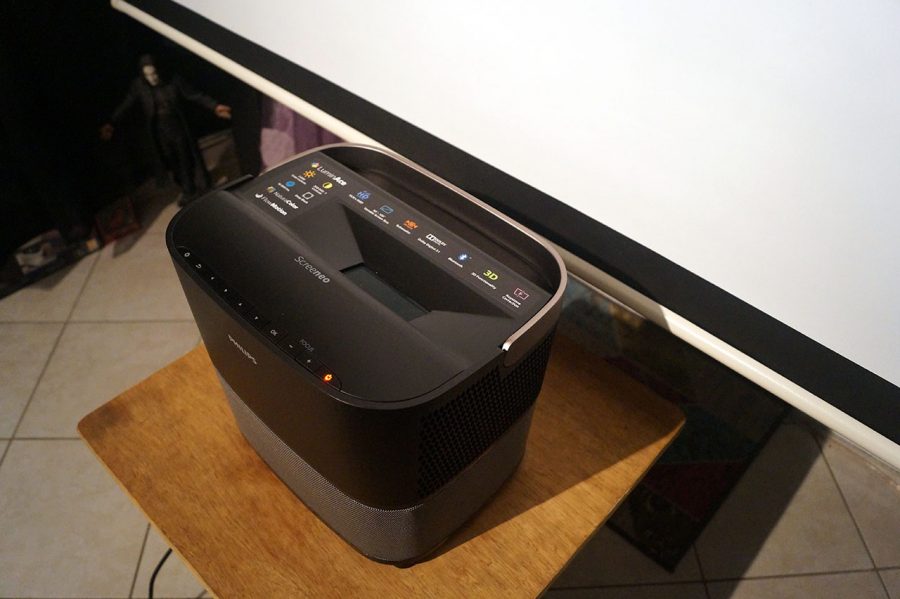 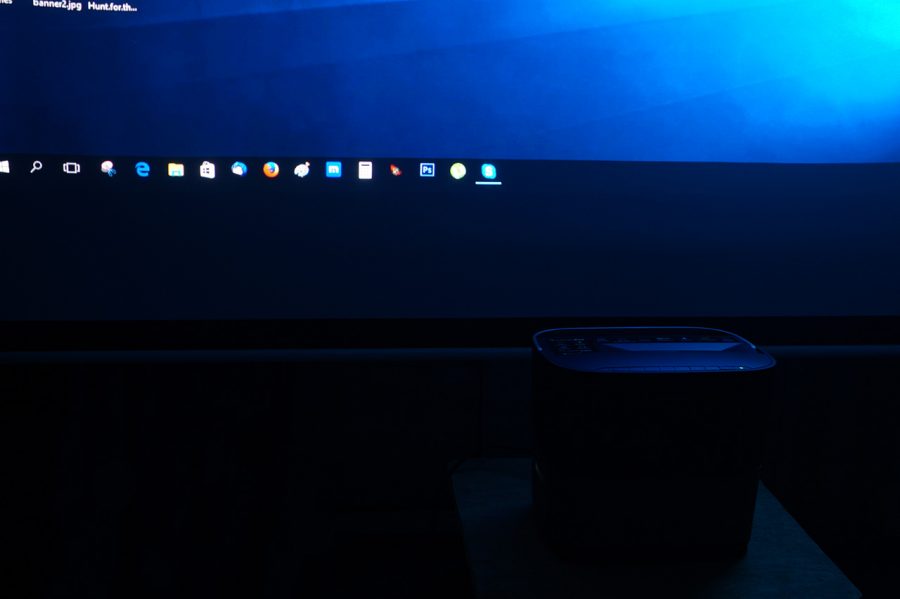 The truth is that is difficult to create a correct frame at 96 inches, is not so simple, the slightest motion means 10-20 inches smaller or larger frame and the projector needs very good alignment.

The first thing I discovered having set up correctly the screeneo is that these kinds of projectors are designed almost exclusively for the wall. And the lightest electrical ripple screen enlarge several times from the steep drop of light.

Almost there is no straight line in this pattern 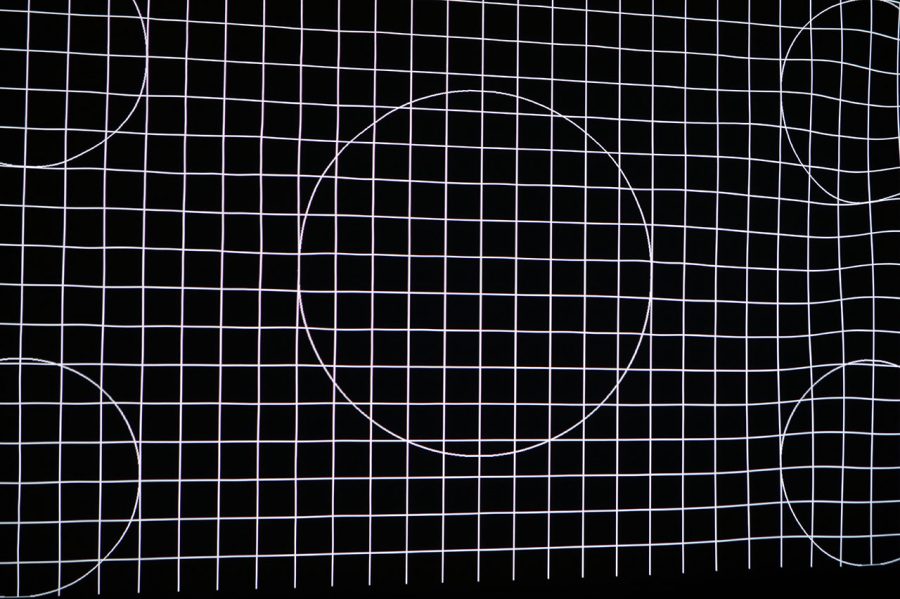 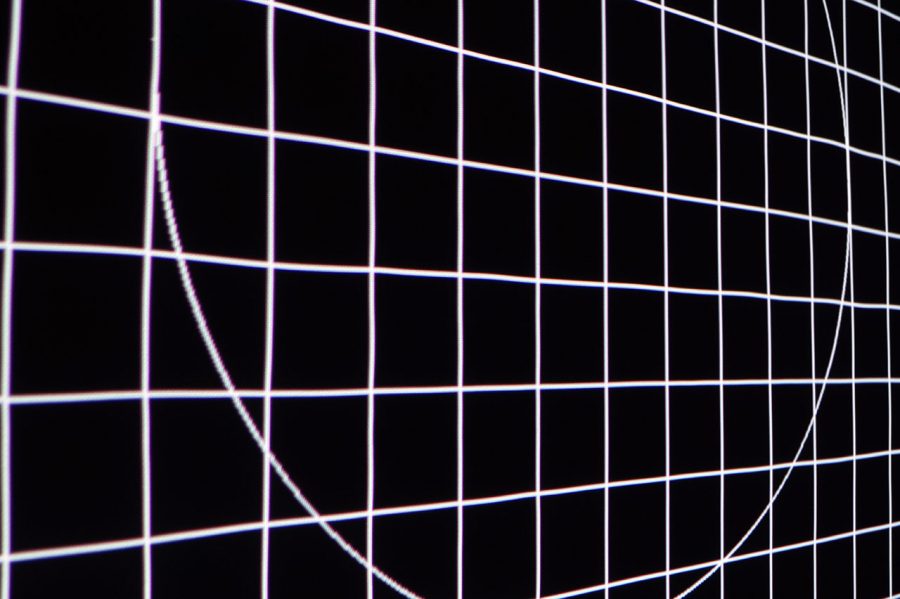 The lines are divided are the creases of the screen when gathered in roll, I had not even gotten wind of their existence until they see more of the picture with the screeneo … 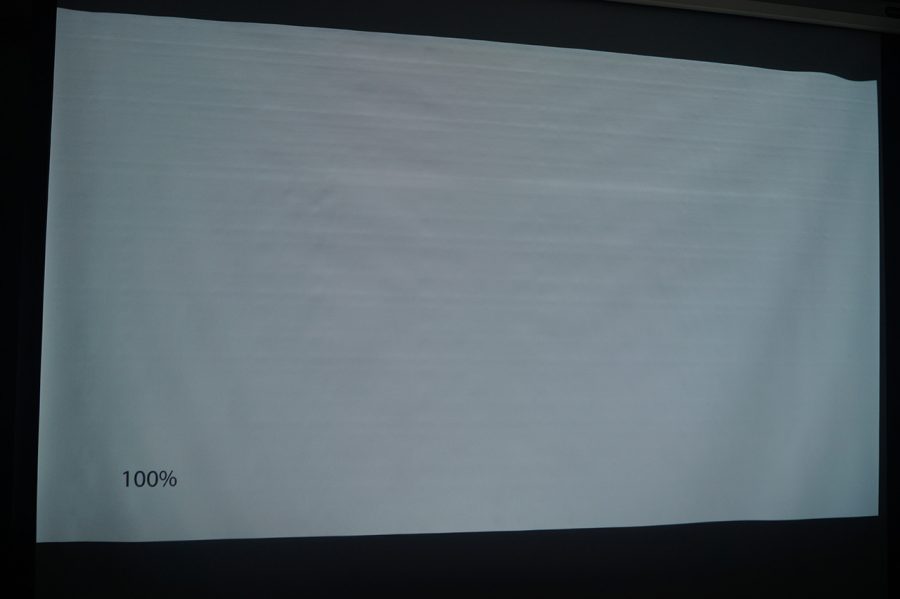 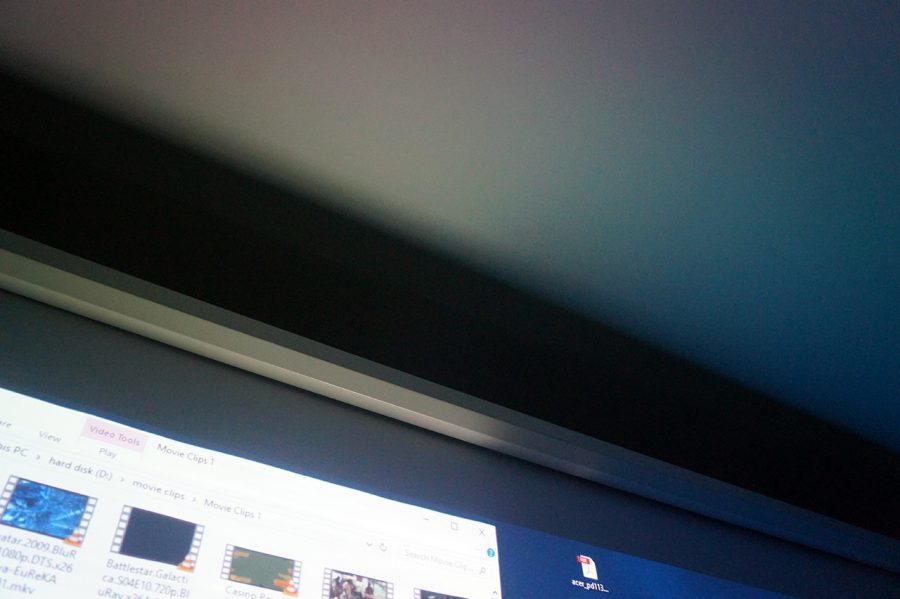 But let us leave the bad and let us move in well. For starters I will say that it is impressive to see a huge screen having just a projector a few points away from her. Secondly the screeneo has sufficient brightness in order to convert the 100′ in a great tv. Like to see there …

The menu of screeneo don’t like modern. More like tv menu last generation despite modern projector, of course makes the job of … 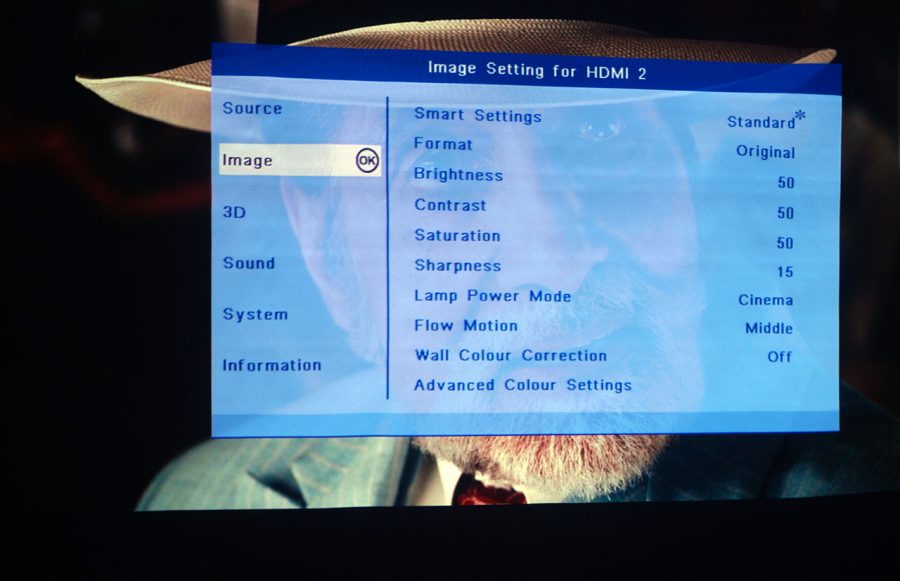 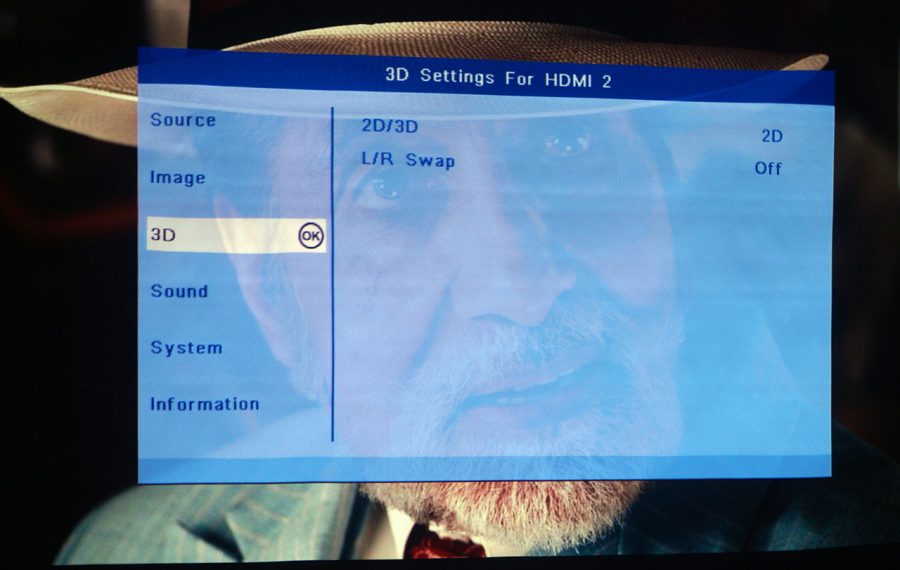 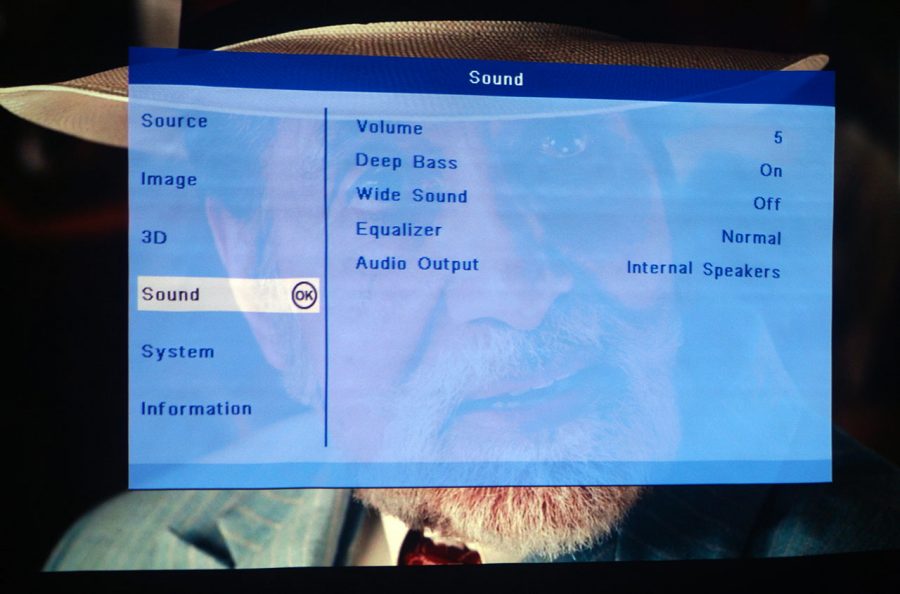 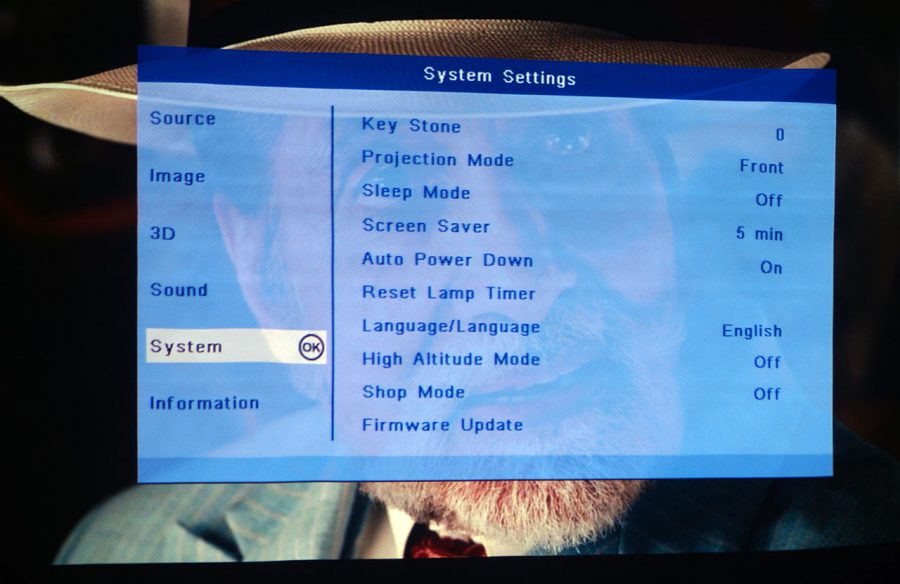 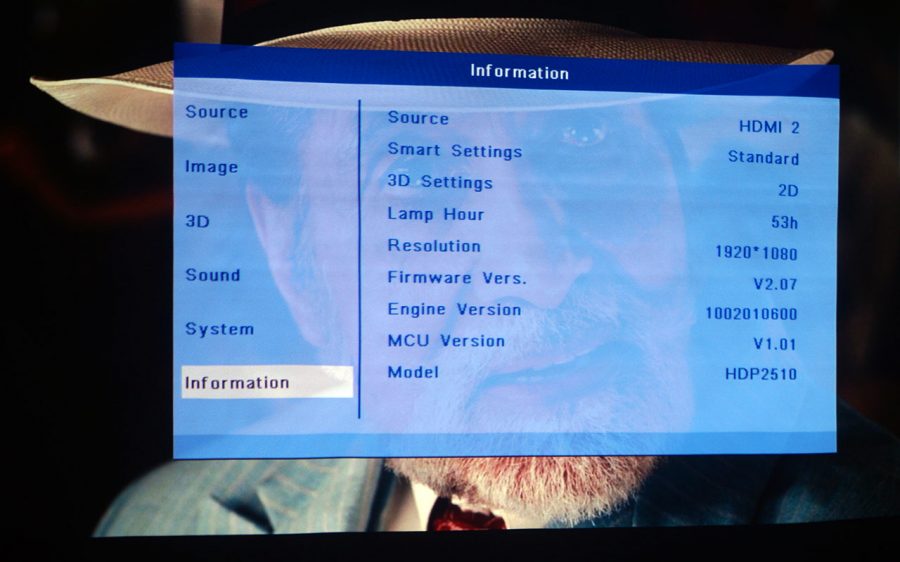 The ultra short throw projectors have a setting on the lens which pre sets the focus of limbs relative to the Center because of very long distance of one another in relation to the center of the lens. The piece that I had in my hands this setting was not done properly and as a result when I did good hog the Centre focus clouded. In the end I preferred a middle setting in the movie was fine. 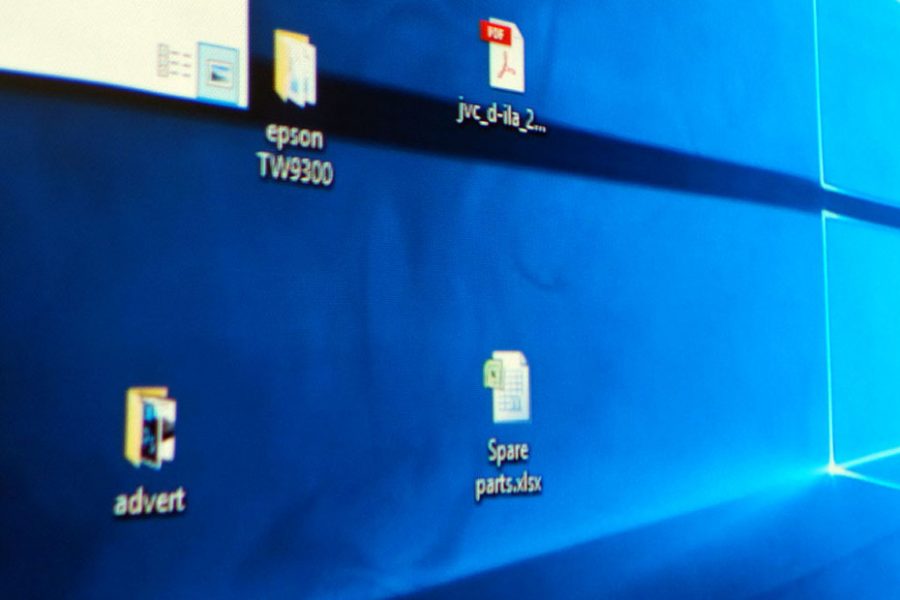 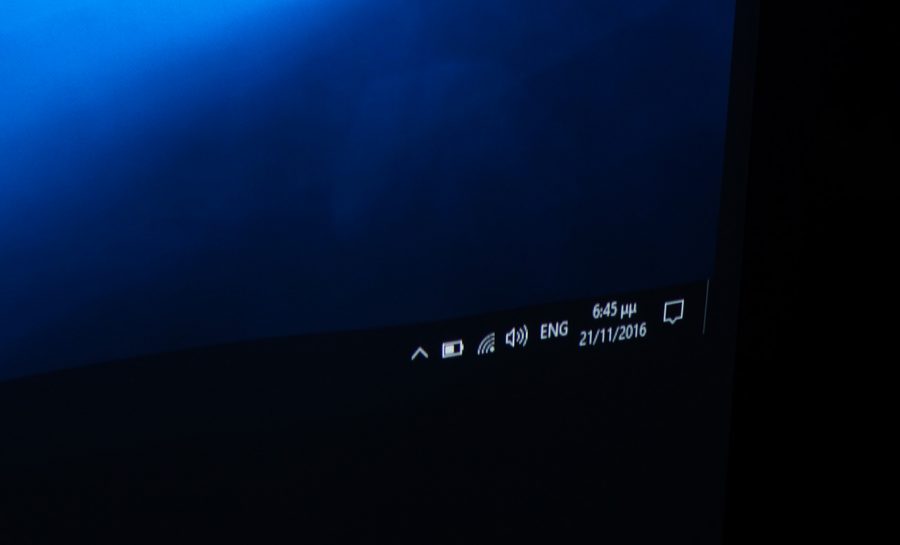 The screeneo is extremely quiet projector. In position low bulb will not trouble even moments full of tranquility

I took some measurements and simply out of curiosity. In cinema mode is not so linear behavior other curiously with a few clicks in the RGB sliders comes at a very good level. 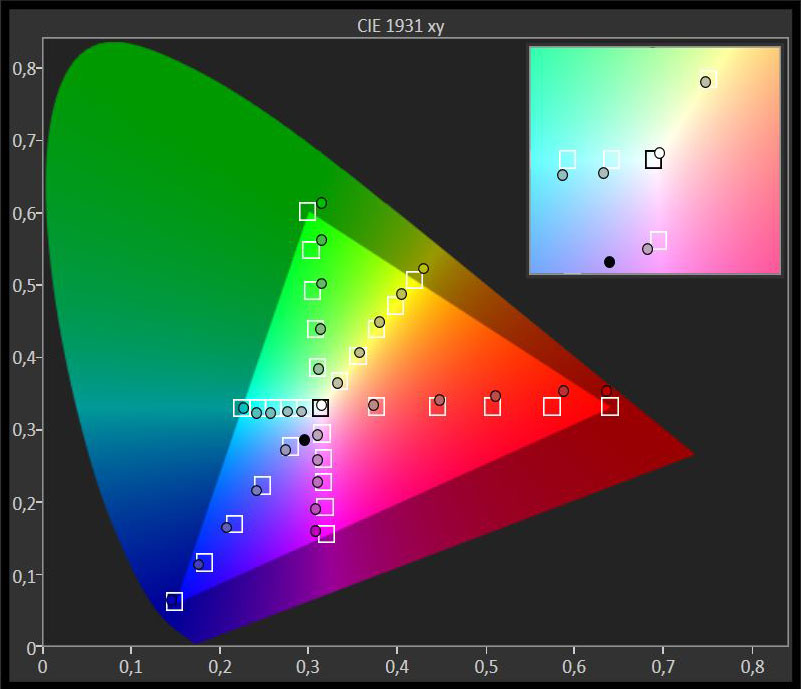 After I finished with the settings and the patterns I put through excerpts of famous movies to see what can and does the screeneo to viewing high-definition material.

The my first impression was that I have to do with a DLP projector. Color the gradients were this known for the given technology surgical precision and grayscale presented on screen with the proper distance between them, creating a perfect picture without hobbles shows especially in a domain.

Bright scenes were close enough to image a large television and impressive enough other when the projector had to raise dark or half bright shots there the inability of DLP technology did not leave much room for anything more than expected, although the very good 2170:1 on/off contrast that I got as a measurement.

The motion flow in the arsenal of the screeneo does work, it does a very good job. Improves motion without artifacts I’ve seen similar implementations of other companies.

The great and pleasant surprise comes from the sound it can and returns the screeneo. The two speakers and sub woofer is correctly mounted on the chassis of the projector and perform incredible quality sound. The dispersion in space is great, dialogues, music and various effects attributed exceptionally to an extent that surprises me. The same surprise waiting for you if you use the screeneo for listening to music, I honestly in this sector Philips has done a great job and the screeneo fully justifies the title multimedia device.

A few screen shots to get a taste 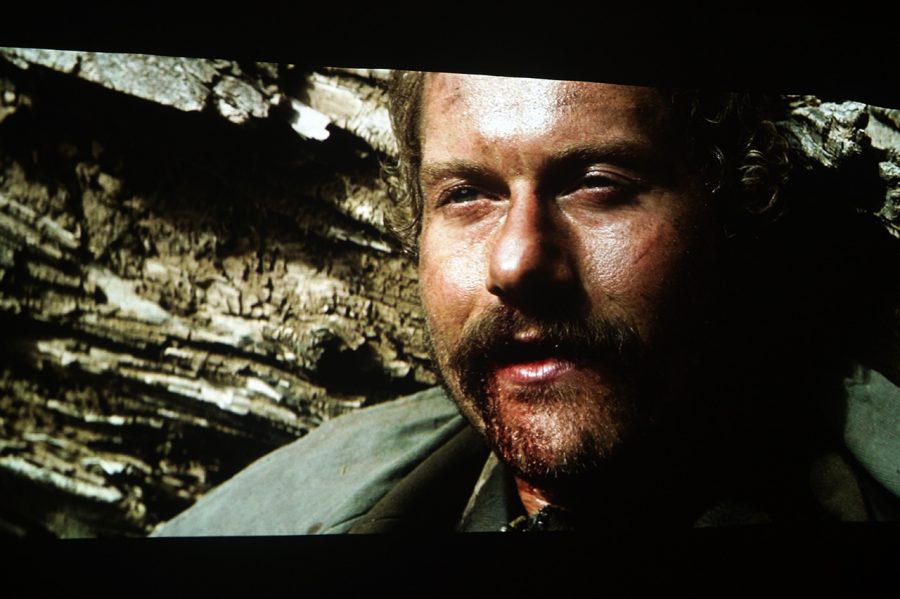 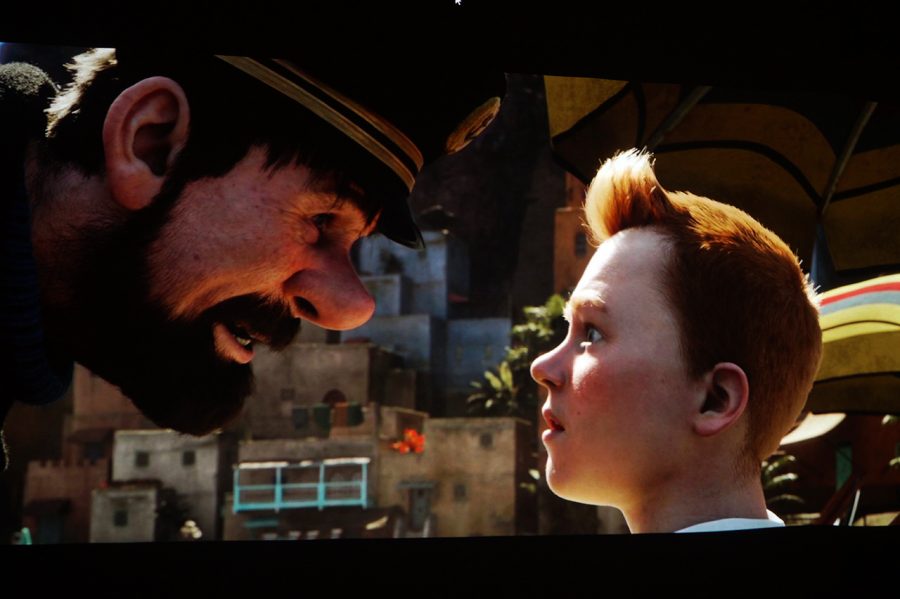 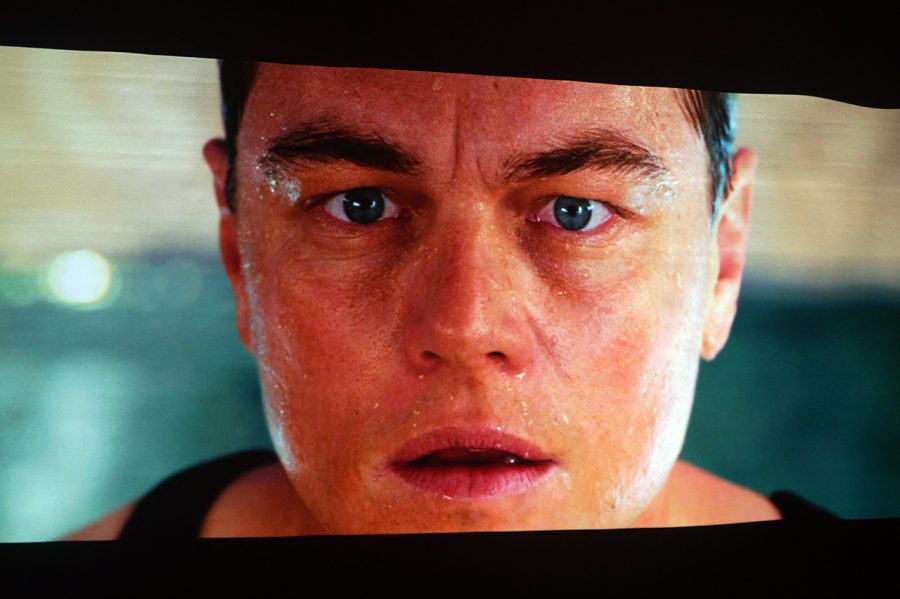 Generally as a conclusion I would say that screeneo is a multi-faceted electronic device that offers to the owner of a complete package as regards the household of fun. Connect on the PS4 and fun playing of your favorite titles at 120 inches, watch your favorite series and movies in that screen size do fun using the built-in media player, streaming music from your iphone via bluetooth and enjoy it in superb quality and finish as you can with your friends to enjoy the latest 3D productions clearly better than any tv. Of course all the above may be transferred together with the screeneo simply and easily from room to room or from wall to wall. The will, it’s hard not to love the screeneo …