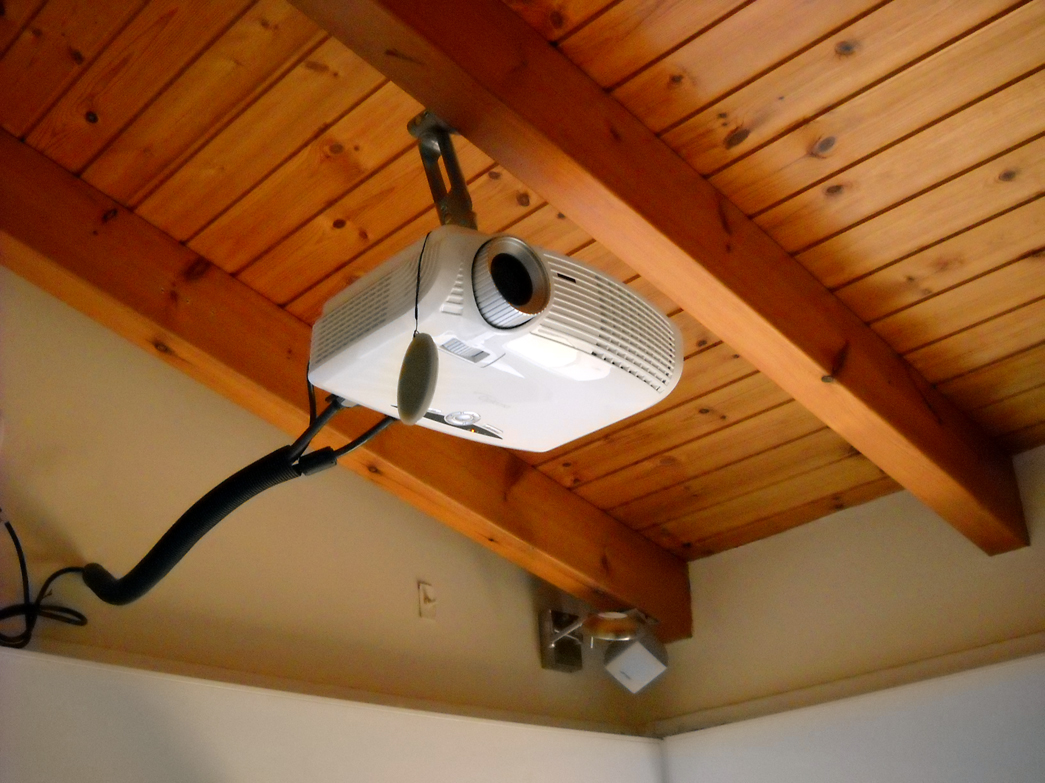 Along with John Hadjigeorgiou found ourselves in an intimate and warm place of Theo in Psychiko. On the top floor of the building onto the Theodore has set up a very beautiful place, which essentially can do almost everything. To work in his Office, sit down for coffee on the huge terrace which has spectacular views across a large part of Athens or the end to turn on the projector and enjoy his films with his friends.

The element that makes your site stand out, is that the viewing of movies with the projector can be done in two completely different ways. During the winter and autumn months one can sit on the couch indoors or in individual seats if it wants to reduce the distance from the screen. The area features in two of the four sides of the electric shutters from the wooden ceiling to the floor, which indeed seal very good isolating outside lighting.

During the summer and spring months viewing conditions can be altered too. Electric shutters can climb completely upwards, and the aluminum frames forming one big c in front of the shutters to open, offering comfortable viewing of the screen from the larger part of the huge terrace. The space can be transformed into a mini cinema! Theodore and his friends can enjoy a movie sitting around a comfortable dining area on the terrace with amazing hanging out the starry summer sky! Very clever idea, that certainly the envy of many of us, we have just the cinema home in our living room and we have of course to see movies in the summer with the area sealed off everywhere and air conditioners on full House!

The setup of Thodoris consists of the Optoma HD20 projector, electric screen white, 92 inch in frame 16:9 is the amplifier, Onkyo TX-SR578, video and audio sources are the Blu-ray player BD-SP308 Onkyo too, and the laptop of Sony VGN-FW21M, and speakers are small cubes of Bose. 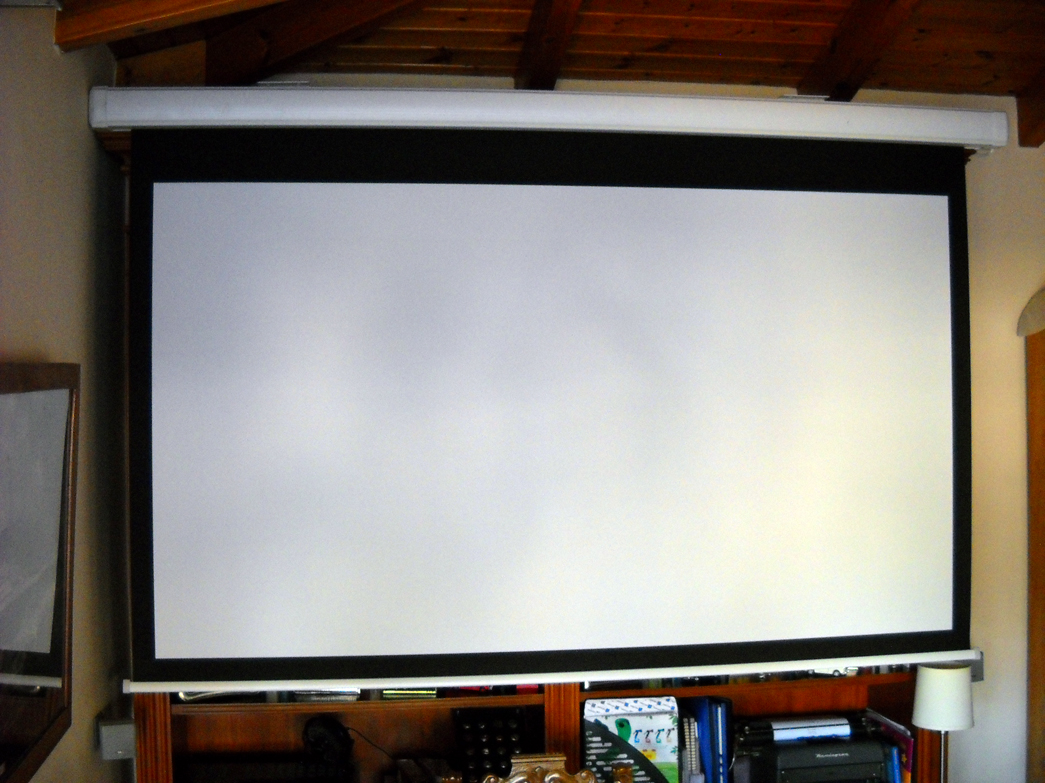 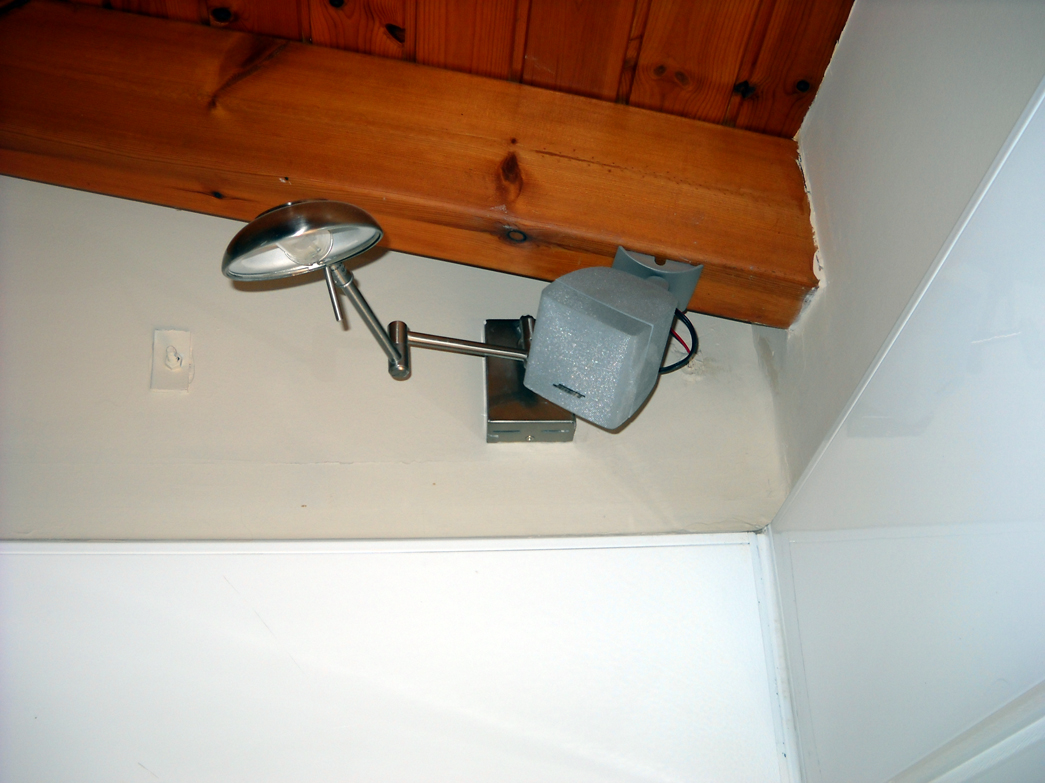 By the time that Theodore uses both the Blu-ray player of Onkyo for Blu-ray discs, and Sony’s laptop for matroskes to watch his movies, it is obvious that the spotlight should be individually and with these two sources. By the time that Theodore told me that this laptop of Sony ATI graphics card wears, Radeon Mobility HD specifically 3470, I was convinced that I ought to start the calibration of Optoma with source of Blu-ray player, Onkyo, and then with the exact same saved settings in another mode of headlamp, just making fine tuning with the source laptop of Sony.

From my experience so far, ATI graphics cards from the old enough until the present, offering very neutral picture, very close to the reference image of a Blu-ray player, completely contrary with Nvidia graphics cards that most often give picture completely koykoyroykoy in paternakia of reference, especially in the middle and cheaper models. It goes without saying of course that for this to happen, necessarily through the Catalyst Control Center to have disabled all these p @ p @ ries who has added the HTI, as is the Dynamic Contrast, etc., which is the ultimate destruction of the reference image. As you will see, and then from the measurements, epibebaiwthika once more for my appreciation. It is almost unbelievable how close is the image of ATI HD3470 with picture of Blu-ray player of Onkyo.

We started well with the source Blu-ray player, Onkyo’s chose to Optoma the User mode, temperature white in place warm, and with first choice the gamma in typical position, we all basically sliders to default settings, and took measurements of brightness at two positions of the lamp. Since it was obvious that I had to choose a lamp in low, and brightness measurements were unrealistic for the 92ari frame, we got the first measurements. Immediately after we changed the gamma in film position and got a second set of measurements. 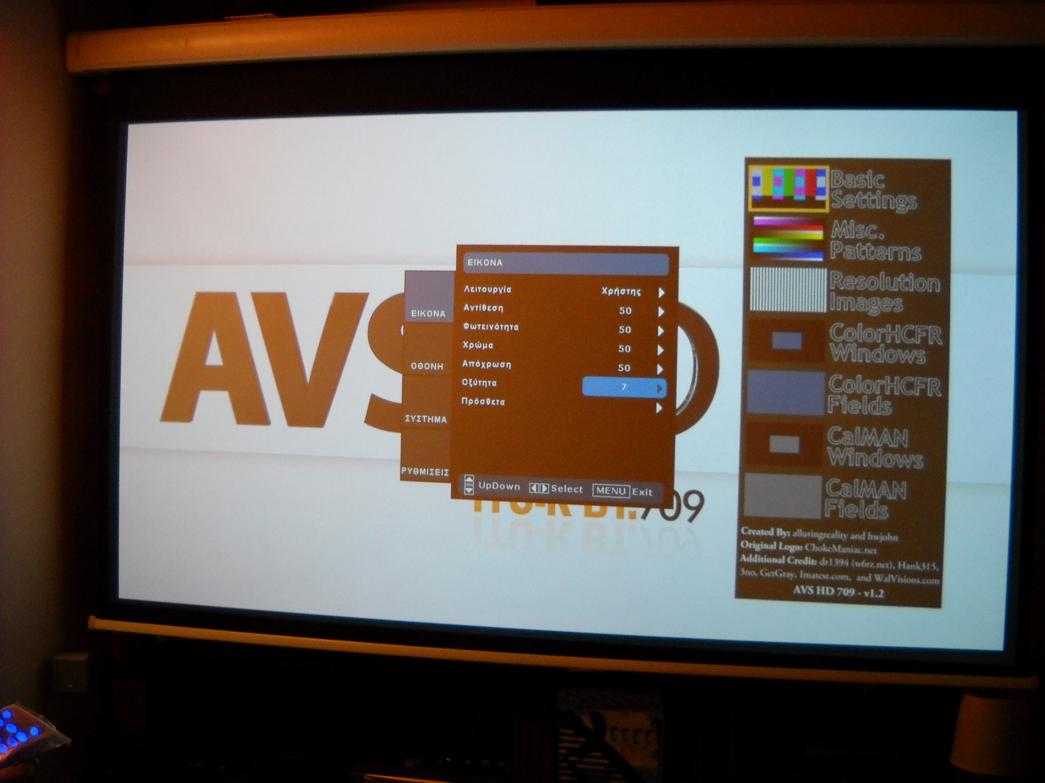 The differences were very small, to subtle with this change in gamma. We checked visually and places stock and cold temperature in white, though of course it wasn’t necessary, the projector in place warm was already very cold, in the other two locations white began to remind new democracy’s flag! Here you see the first two sets of measurements of Optoma. 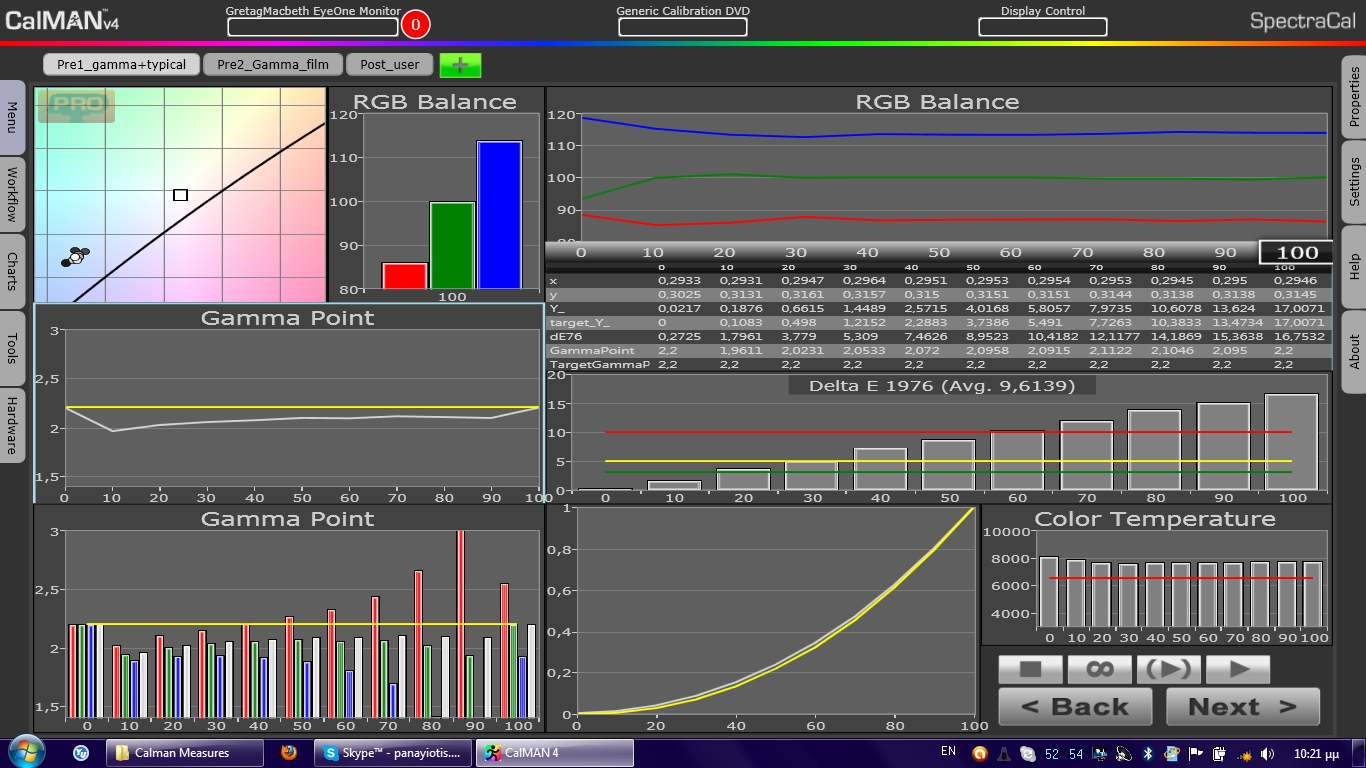 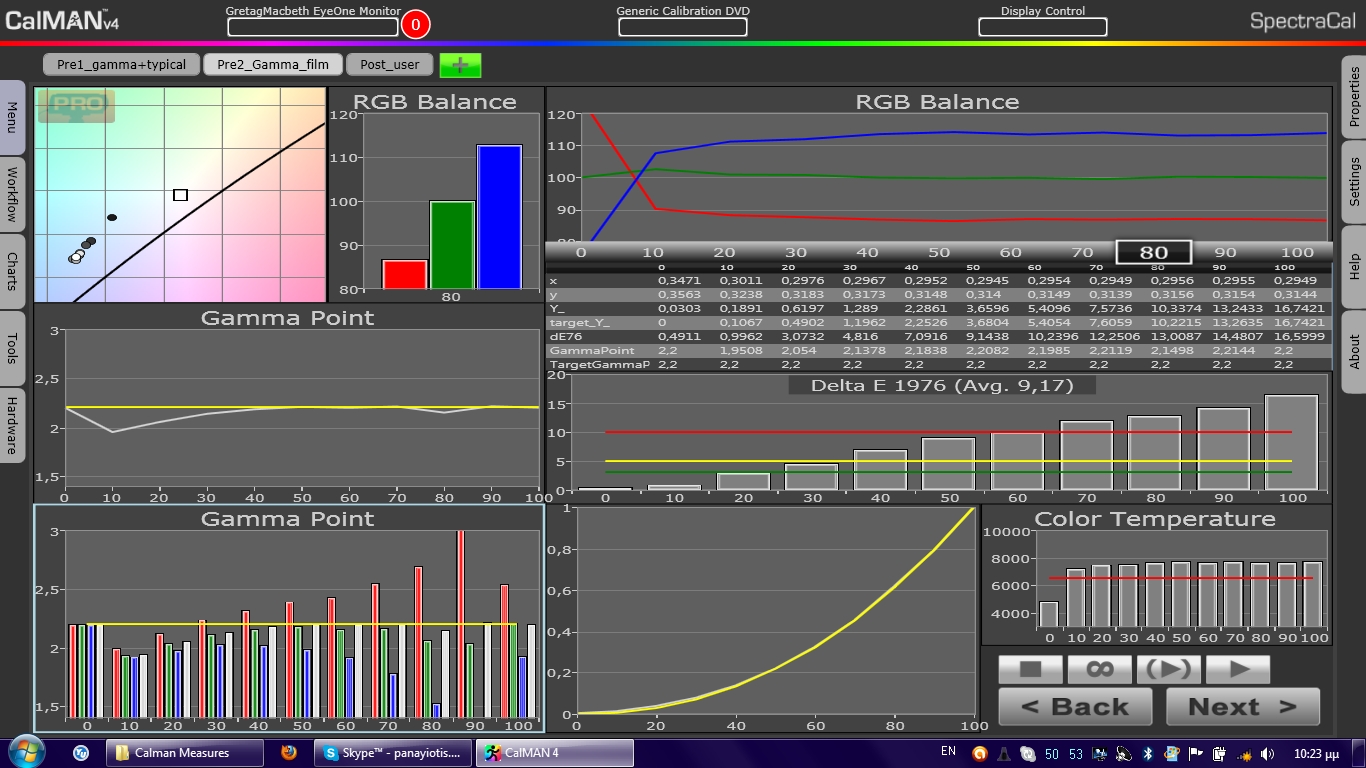 As you can see the Optoma is from very low to very high pretty chilly, while in both locations of gamma (typical, film), the gamma of red and blue are making extreme contrasts between them, the blue gamma extreme bright, while the Red gamma extreme dark. At 80 and 90% brightness, gamma of blue are both extreme bright, that is not even on the chart, is brighter and from 1.5! In the film gamma gamma of blue just measured on the chart at 1.5. In color again, the Optoma presents the classic known picture of yperkoresmenwn colors, with the most serious problem lies in red, which is quite departed. 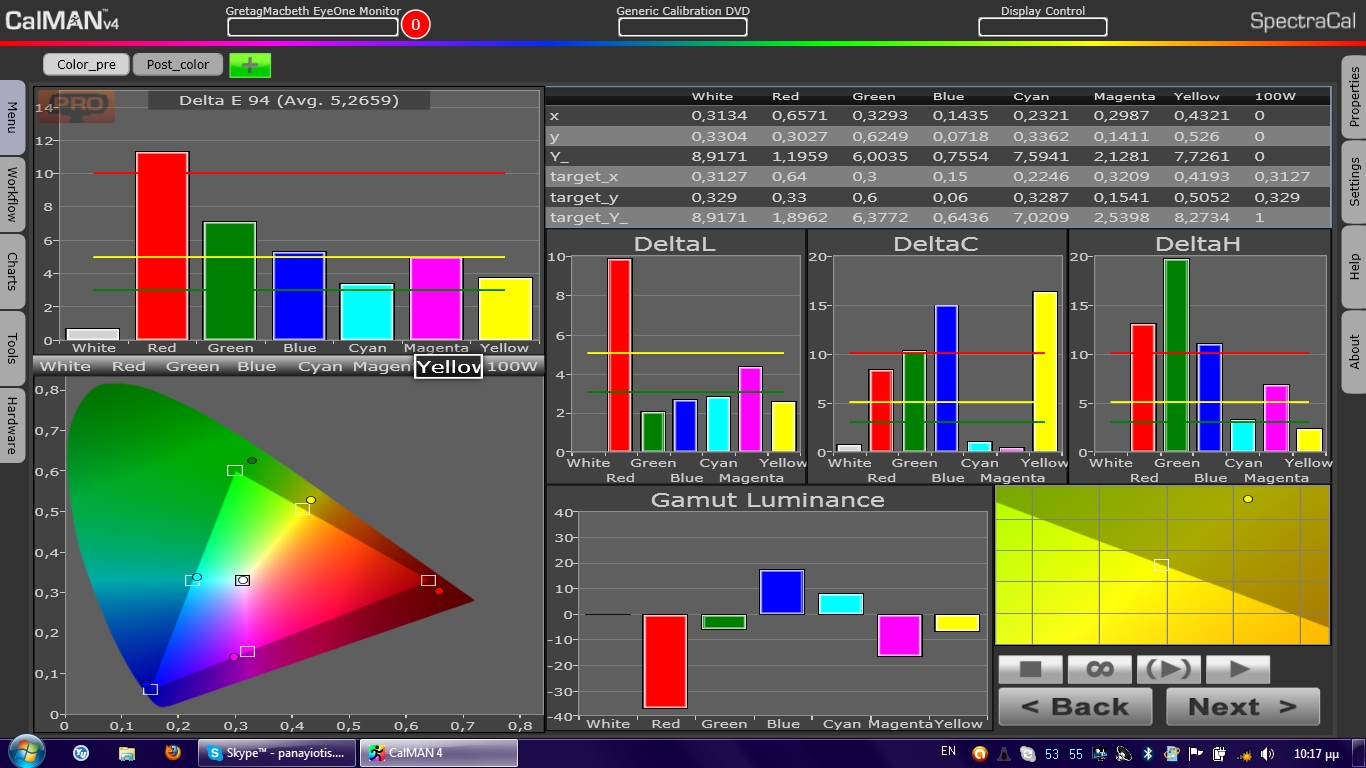 Despite this fairly modest picture, the Optoma after kalimprarisma of literally transformed. 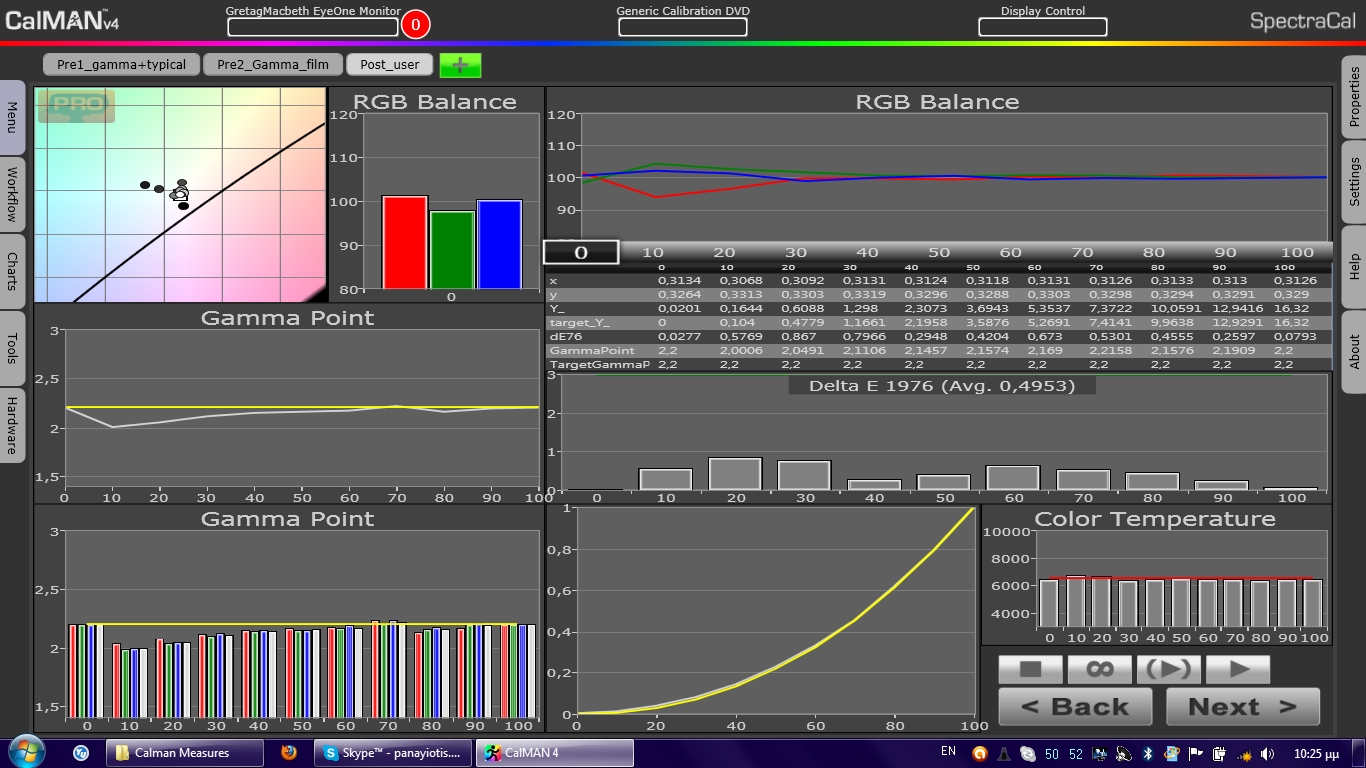 Both the RGB and the gamma isorropisan’s astoundingly, both who find it hard to believe. The counting Delta 0.49 E (!!!) from 9.6 and 9.2 respectively to EUR 900 projector, is truly admirable. While all three colors of gamma isorropisan to an unbelievable extent, becoming essentially a white line on the diagram curve would be impossible to distinguish. In color now we couldn’t do something substantial there a CMS from the sliders of the Optoma, a little play with only the color and tint.

The remaining parameters, the Optoma measured kalimprarismenos in 1086:1 on/off contrast, while after the request of Theo the xanametrisame with a magazine mounted ahead of the front ventilation grilles of the Optoma, from which seeps actually enough light to the screen. Climbed slightly to 1,190:1.

Brightness measurements at the center of the screen, user mode, pre calibration:
Lamp in low: 335 lux
Lamp in high: 428 lux

After we finished with the Onkyo, we said to deal with the laptop of Thodoris, but there skoyrynan stuff too. So Antigrapsame kalimprarismenoy mode settings in user mode, Optoma’s Photograph to leave unaffected by all other modes. The ATI HD3470 confirmed to us giving us picture almost identical to the Onkyo, the Delta E climbed only from 0.49 at 1 (!!!), without hurt absolutely nothing in the settings!  But beyond the mess.

It takes a lot of work on his laptop Thodoris to setaristei correctly, probably with Media Player Classic to play matroskes correctly 1080p. Almost all parameters have been configured, even mistaken analysis, a laptop and gave initially on Optoma 1600×900. Faced by moderate to severe traffic problems, with lost frames, and while although the laptop does not exceed 50% cpu usage, seemed to agkomacha breeding material 1080p. The old baryfortwmeni and installation of Vista didn’t seem to help the situation.

At this point I must admit that I am ‘ matroskas ‘ fanatic enemy, never liked it, while I consider playing them in my own setup about as sacrilege! See exclusive completely uncompressed Blu-ray with Powerdvd and the TMT, which I’ve done adding remux Greek subtitles, while I feel almost unreal the degree of specialization that should have, but the experiments that need to be made to seup an HTPC in order to play correctly the matroskes 1080p. And yet, every time has doubt about possible p @ p @ ries who may have made the current encoder!

We will not forget, of course, to mention the flawless hospitality of Theo, who fed me and John richly with various tidbits, while us serve and a double portion of very tasty gelato!
While I must add that the absence of Nikos Tswla was very strongly felt. Chachacha, you say you lost your way home of Theodore, and a unique help long-suffering i-Phone?! …

And the view of John Hadjigeorgiou

To add a couple things in very nicely written by Panayiotis …

The video projection is kapsoyra. Is the canker that itches trying. It is the sense that it offers great cinematic image. The other graces of 997, leaves to complement each …
So Theo. New video on her site, without huge bat caves at his disposal, without ideal distances and set AP for Oscars, but with much zest, enthusiasm and longing to sit to enjoy in the area of the figure of 90 inches from an entry level projector like the Optoma HD 20.

The pseytogkoyroy, chrysomatides and generally large guys with 800-1000 euros buy Platinum hinges of base of Super ntoyper the machine please stop reading or to procure the known lexotanil, ladose, xidi Top etc. not to chalioyntai.

And it is true that the Microbe has Theo, because man who puts personal task to build something which pleases him can’t help but has a passion. Be sure, also, that the 20aris will offer many beautiful moments of cinematic pleasure with the classic ntielpadiki picture. No, there is no reference, not the best projector in the world, but it is what you need to start someone ‘ initiated ‘ in space. I will not go into technical details since he covered almost everything with reports and graphs. All I will say is this:

At present, the video projection is both easy and affordable. Do many people wondering ‘ is it time for me ‘? Therein have helped and companies realising the difficult situation they have shed their prices, keeping however the quality quite good levels. Thank goodness, the software makes every time jumps and miracles!! Even entry level machines is carefully because with the advent of high-definition television, the quality criterion of world matured and grew up. Thus, the value for money is not going to say that I see everything to Yes in several inches. We said, we will not deal with ampaloys chrysomatides who burst where to Yes and like to ‘ Yes. Okay children, Kyra Autosuggestion has declared large donors for years, not choloskate … not the medal!

Starting from an entry level projector, the newest in the area comes more smoothly in video projection. Begins and learns things in the picture without popping a fortune. With the weather settles down to what he likes more, what bothers him, what you wanted in the next market that appreciates the differences compared with the money to spend.

In short, he understands if you need an upgrade or new motorbike is on kelp silk ribbons and rantings of marketing. With even fewer words becomes conscious consumer who knows what they are buying, when and why. It is the kind of consumer who hate marketing and dealers/vendors. Never mind … God has for everyone.

This, precisely, is the effort that we put as light when we started the blog. The more conscious consumers the better!! Consciousness which is acquired through knowledge, friction, of learning. At this point, it is advisable to make a point to clarify the landscape and a good …

No, we’re not gurus! Neither the golden eyes of video. The only ones who can be called so is 10-20 people in the world like the Charles Poynton, Joe Kane, Larry Webber, Tom Huffman etc. People with knowledge on the subject, space scientists who are literally at their own level. We’re just hobbyists. Image lovers and especially the great. Psachnomaste, we investigate, testaroyme and continuously learn! Every day we learn new stuff on the image and on our hobby. From what we learn? By the above gentlemen!! Therefore, whoever by nationals or foreigners pseydogkoyroy wants, let’s roll the dice and let’s come to challenge them!

Certainly make mistakes, has made us not Cana Pope attorney to sign instead. Errors do not only the dead. We will continue to psachnomaste, to eystochoyme, to astochoyme, to adjust, to learn their tiaras and leaving the thrones to those who hold any truth in video projection!! We did not, we do not have and will never have a relationship with these people. Let them, therefore, the higher their Nirvana and continue our effort …

It is true that platiasa and I apologize!!

To thank and ‘ go to Theo for the impeccable hospitality and wish him many pleasant hours of entertainment in his favorite place!!