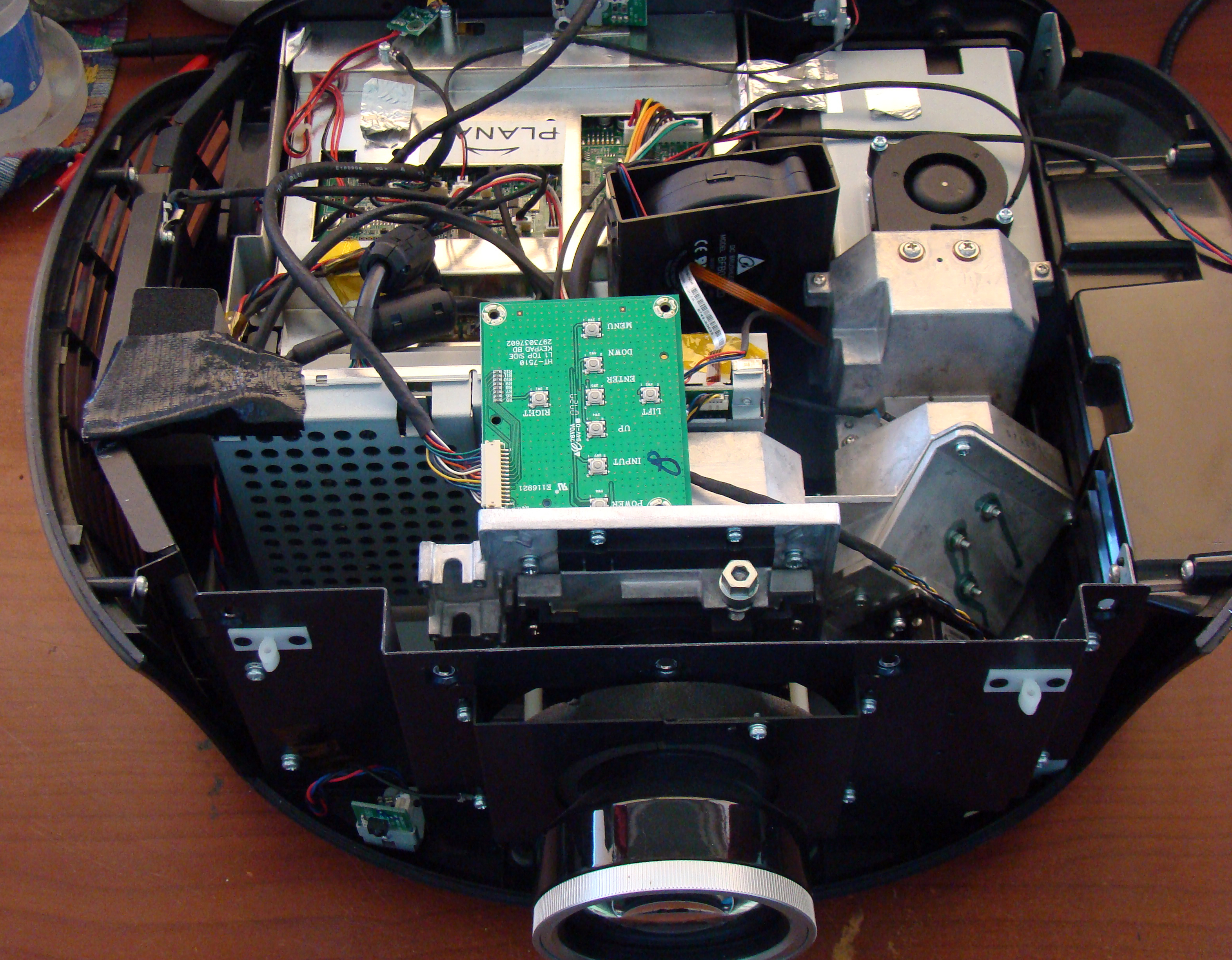 Planar is a company that few people know in the video. Created in 1983 as a main occupation was and still is the design and construction of “custom” imaging instruments, such as the EL (Electroluminescent) LCD panels that serve specific purposes. We have all seen the Planar panels without the we got wind in car CD players, car dashboard, medical equipment, watches, etc.

The Planar started building projectors DLP technology late in 2006, when part of the infocus engineers took “collective transcription” in workshops during the unofficial information.

In May 2007 acquired the famous in the world of high end video company RUNCO, others before deciding definitively exclusive employment with home cinema projectors from the subsidiary company no longer alone (which became the 2009 ultimate), Planar presented in December 2007 the amazing Full HD projector series PD8130/8150 (which was renamed RUNCO LS3/LS5 from 2009 onwards).

The PD8130/8150 is considered one of the most landscaped DLP projectors ever constructed, combining the best elements of three companies (PLANAR, INFOCUS, RUNCO) in fact, in the best possible way.

They like a little introductory information, let’s move on to the main article but why lately has caught a mysterious arthrografiki:) chatter

A few weeks ago came into my hands to repair a “crummy” Planar PD8130 with a strange problem.

The projector also opened and functioned normally for an unknown period of time (from 1 to 30 minutes) before altering the colors in the image, to make a weird noise as if he was ready to “take off” and closes with error.

Don’t hide that such mysterious lesions is the elixir of life for me and every time I call to do some lifting, earning years!

When photographing espaga my head to find what could be likened the appearance of this unique projector and after some fumbling … did the connotations I.. 🙂 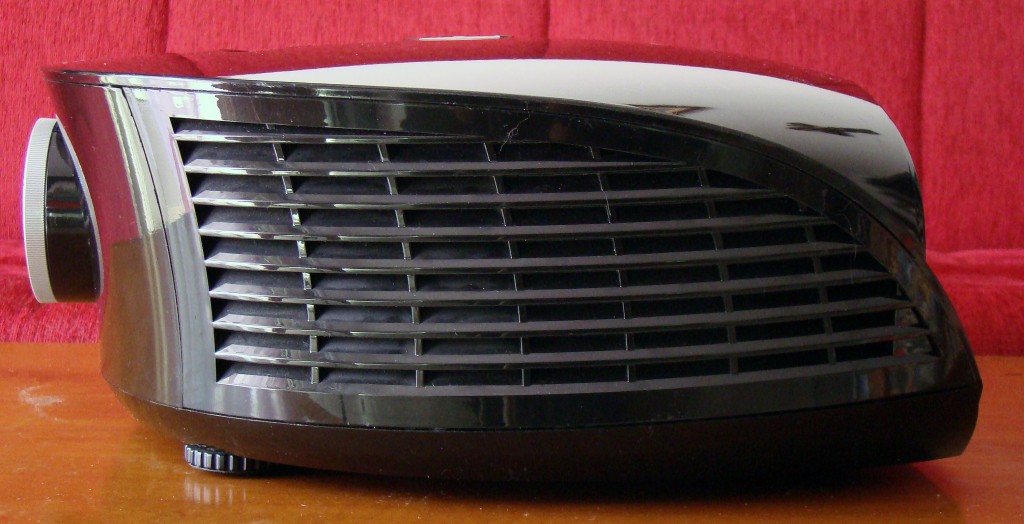 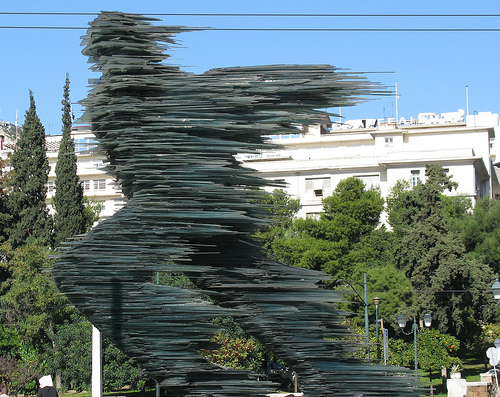 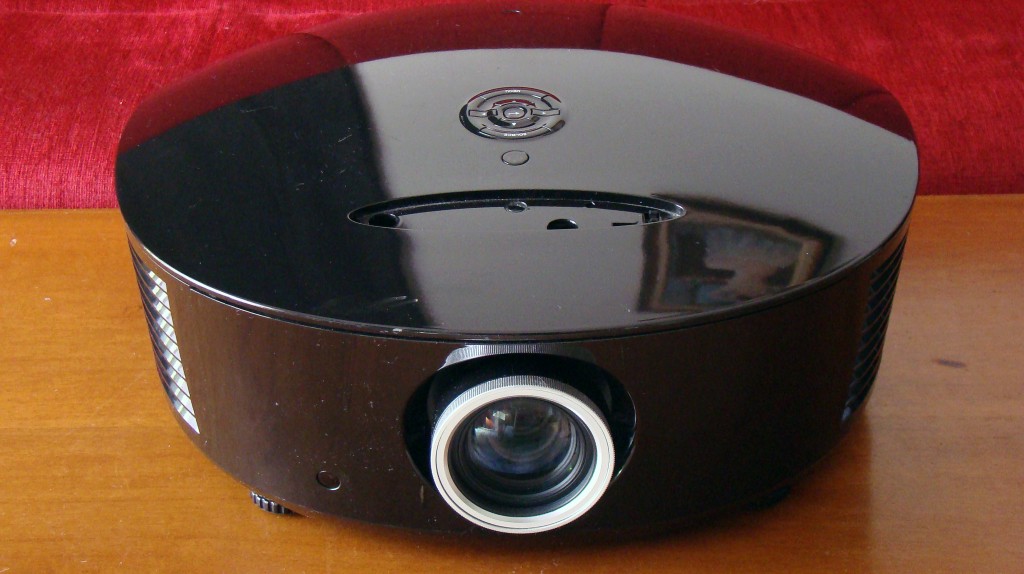 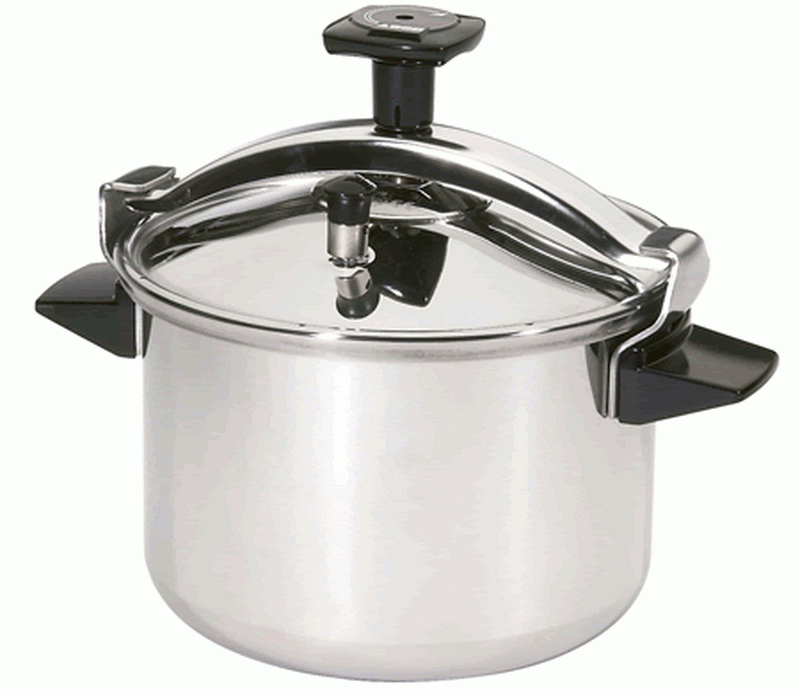 Let the plate though, let’s move on to substance ….

Opening the projector cannot but be impressed by the unique optical design of occupying the greater part of the headlamp contrary to current models that take up little space … the Planar is really a battleship DLP. 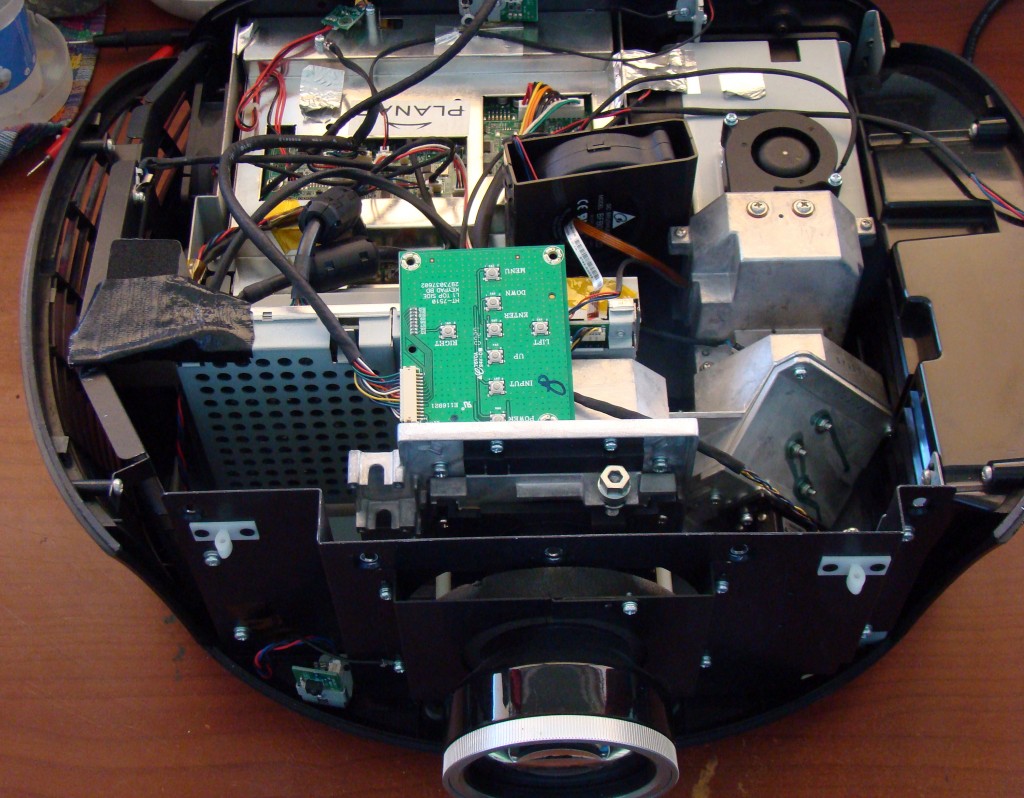 Reading the error log files of projector I found that there were two specific errors from which the headlamp did auto shutdown. To first was from the temperature sensor of the optic and the second from the motion sensor the color wheel. The mistakes have alternated at random and it was that confused me slightly.

First thing I tried was a fans and had the temperature sensor error others all looked OK.

The second test was in the signals of sensors throughout their journey up the CPU. Again OK.

There I understood that we have a problem with natural warming that affects the color wheel and a collapsing the sensor and a temperature sensor that is located directly on the chassis, which surrounds the color wheel.

So I focused on that point.

Under the aluminum casing is the color wheel and cooled by blower that is seen, which sends cold air through a hole in the arrow point. 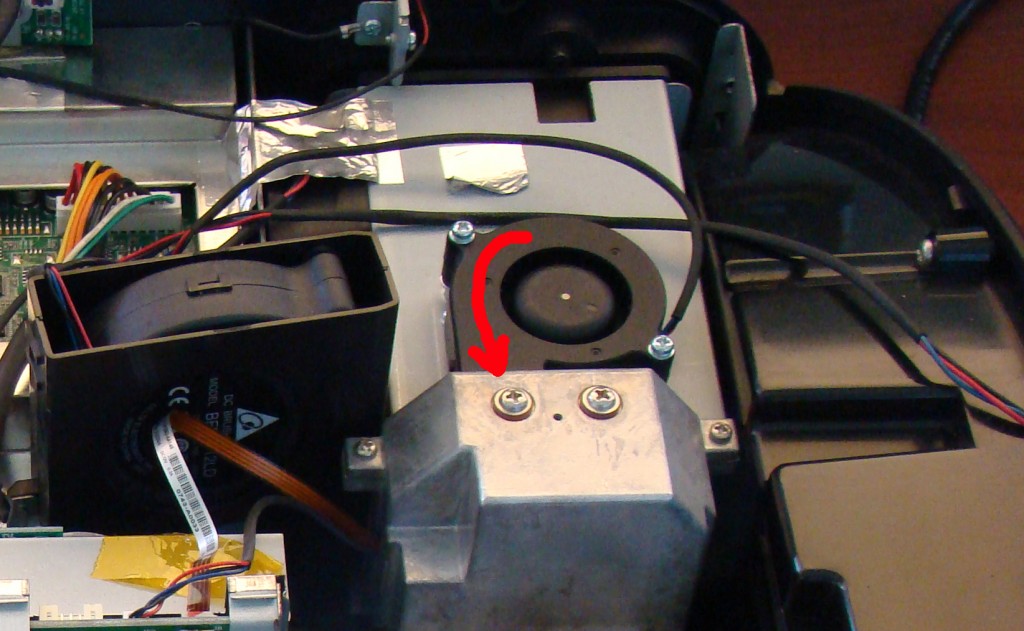 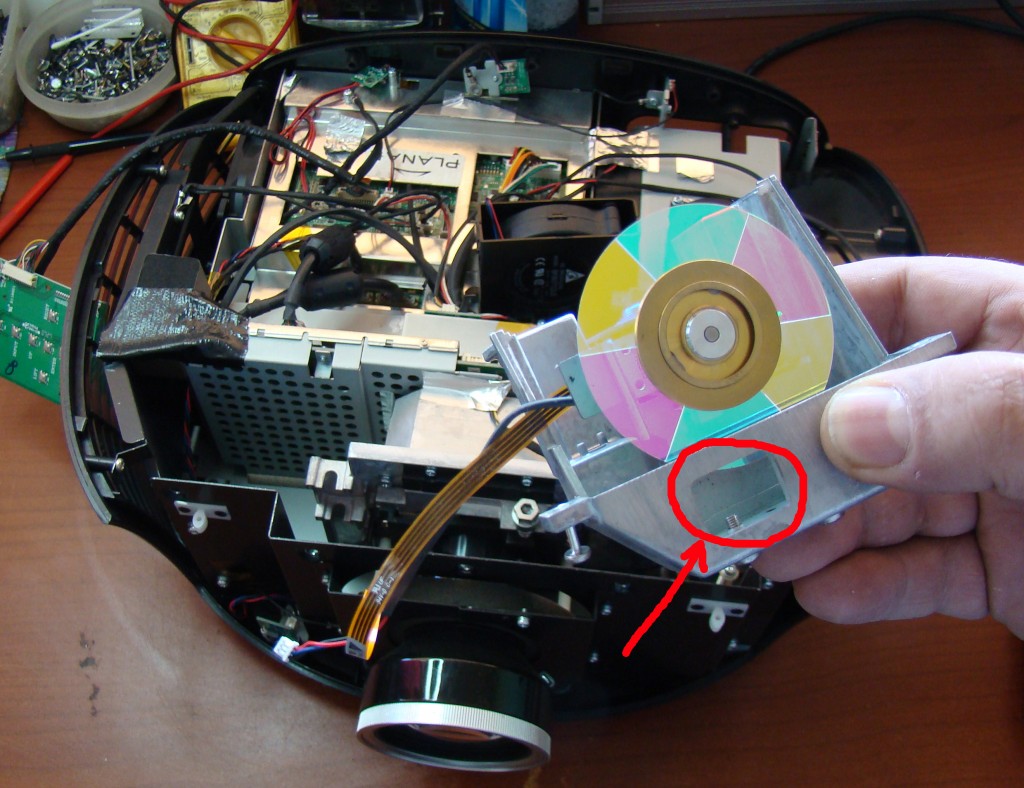 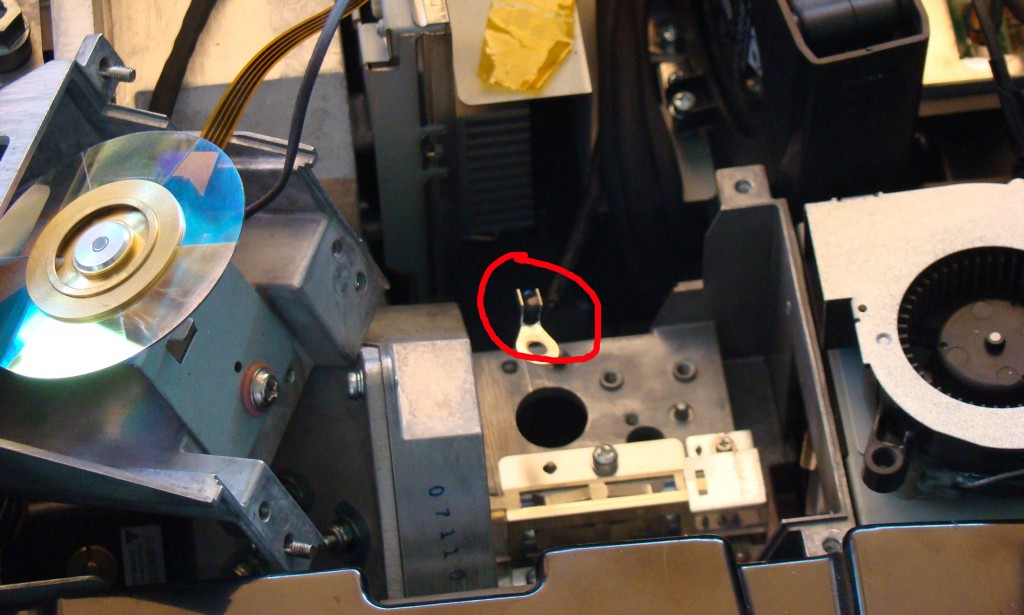 There somewhere I realized that something is amiss with the heat dissipation … cold air comes in from the top and it comes out warm from three holes at the bottom, as shown in the photo below (and the light tunnel which in this projector is huge!) 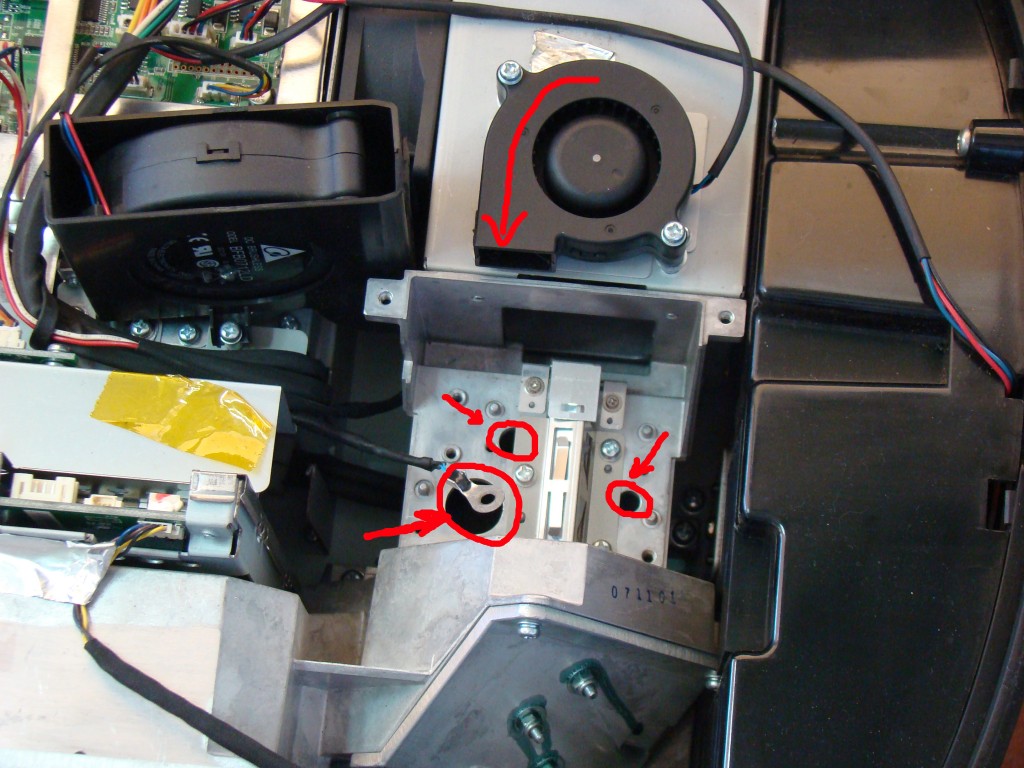 The simple thermodynamics stipulates that warm air is lighter of the cold and therefore tends to rise above the cold (see gravitation).

A cooling system that is designed to send air from top to bottom go contrary to this principle and that in itself is a problem.

The Planar but designed this solution because she had in her mind that the projector will work hung upside down. This causes everything to come on down and the specific cooling system working properly by sending cool air from the bottom and eliminating the warm above, i.e. exactly contrary to what we do when we support the projector into a coffee table.

The only solution in such cases is increasing air pressure so that it cannot be hot coming out of the exit before surrendering to the laws of gravity.

This can only happen with larger blower performance. And so it was … 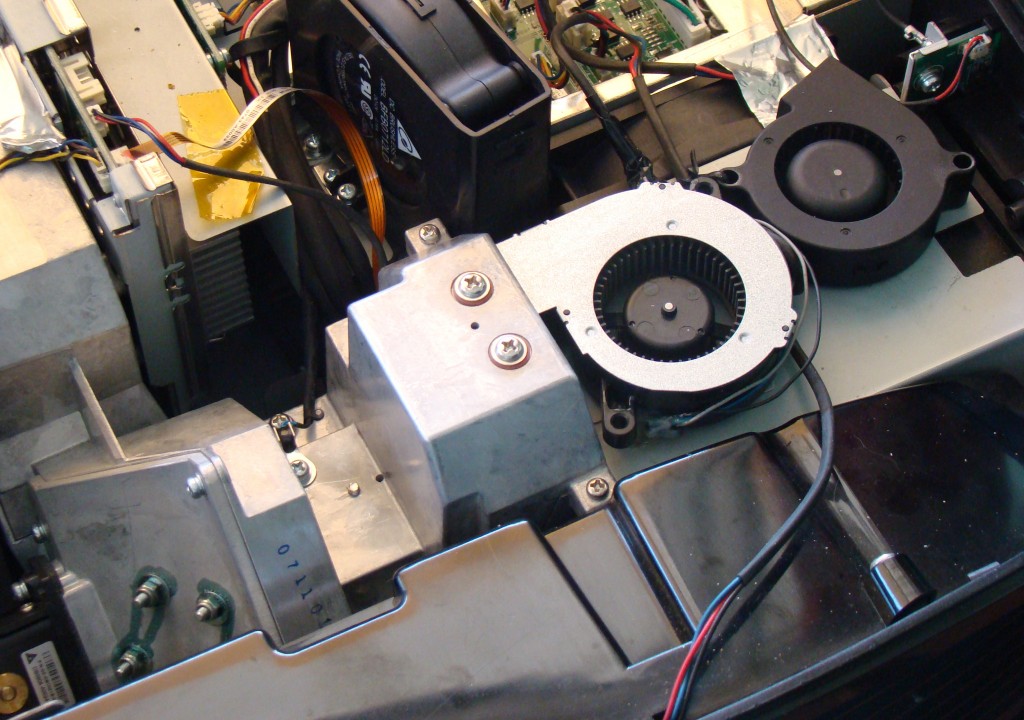 The location of blower factory took a greater flow at the same speed. The specific blower used in professional Sanyo projector series and Monster is reliability.

At the same time was maintained and the stock blower output because prices do not fit with those of Sanyo and the CPU read error.

So I used it to send fresh air for Planar circuits …. 🙂 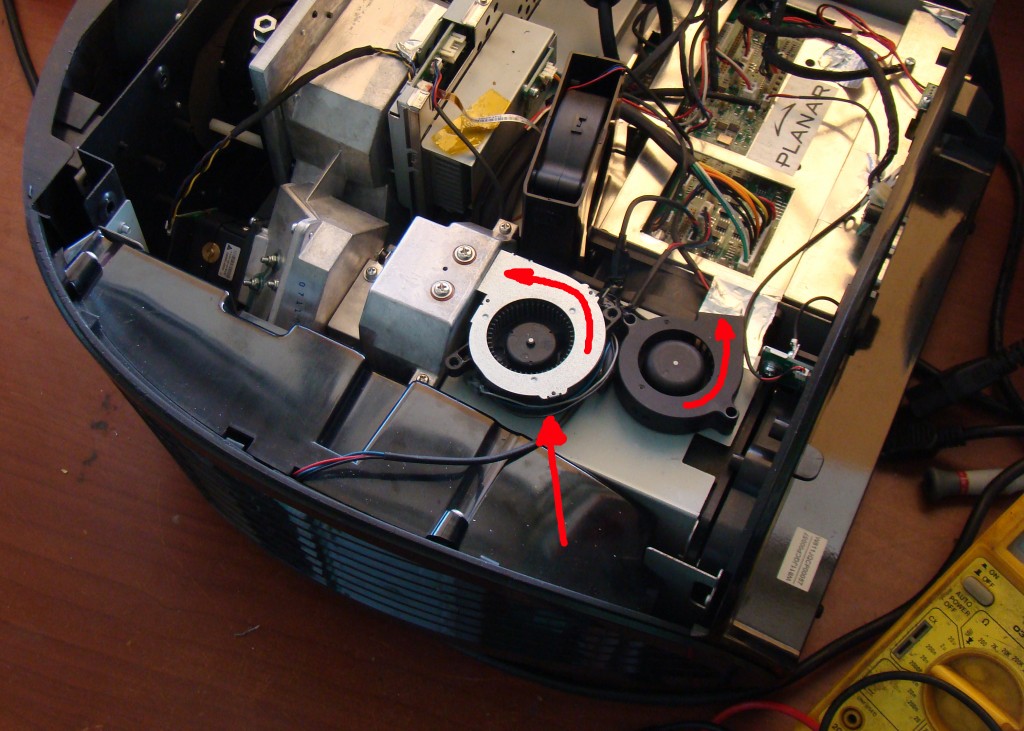 With this solution the operating temperature of the wheel dropped dramatically and the projector stopped closes with error temperature.

After several experiments, I concluded that the color wheel sensor at random time just stopped working, forcing the Planar to stops or spins madly the color of wheel and closes.

The solution came with infrared sensor’s replacement, accessory which probably had begun to crumble from the high temperatures that worked so long. Luckily I had it as a spare part (basically the apokollisa from another sensor) and the change was easy and simple! 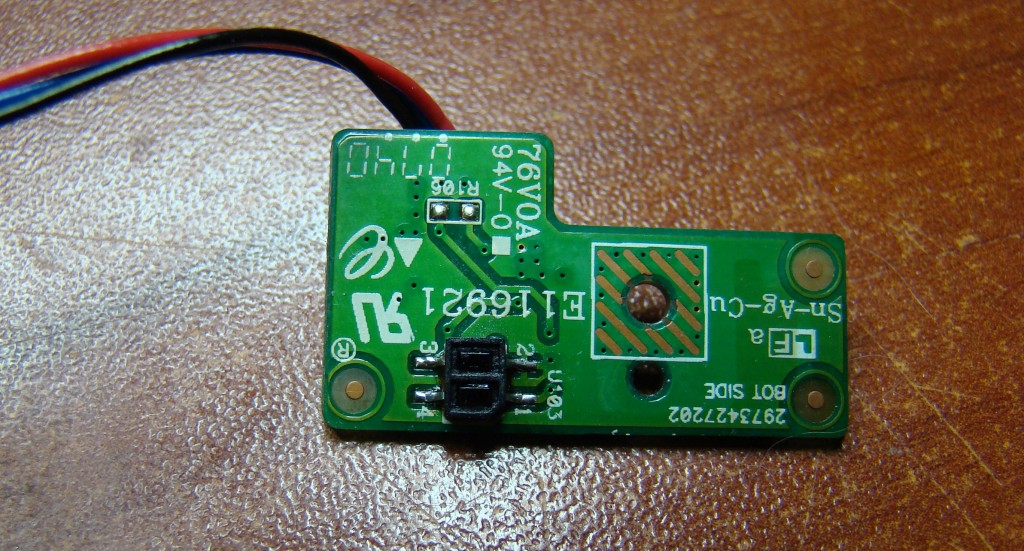 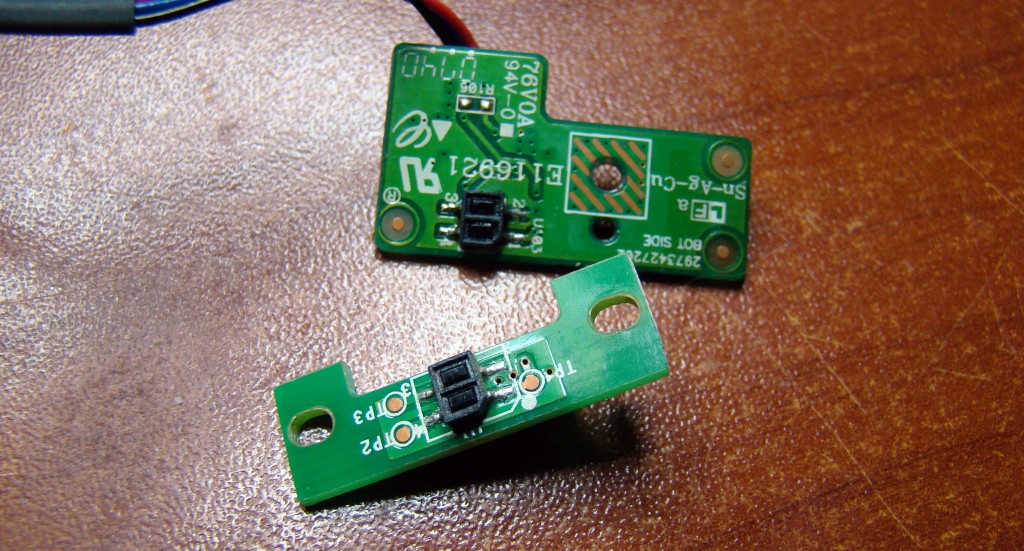 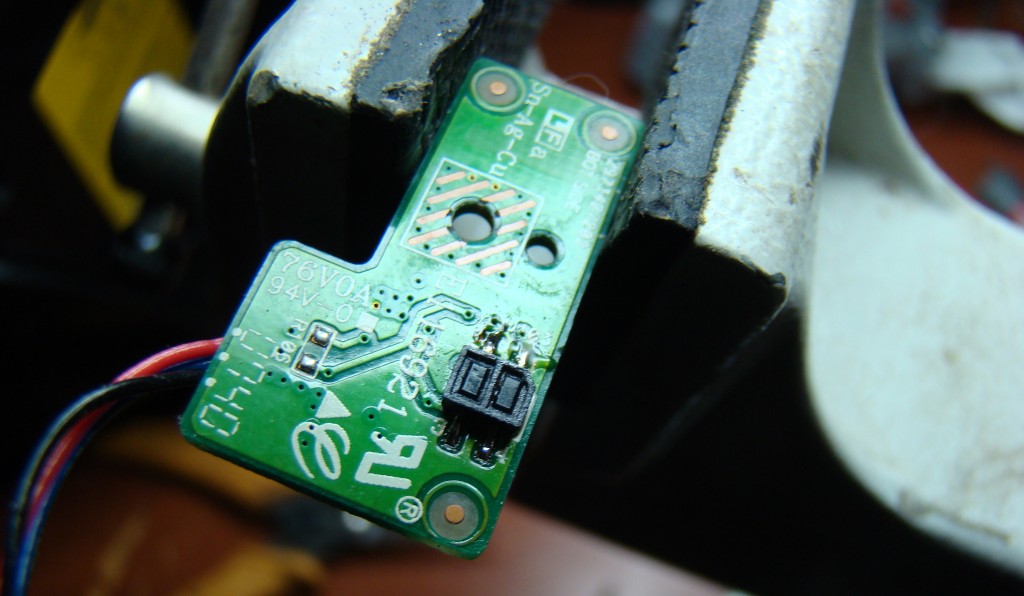 And here the mess just finished the surgery:) 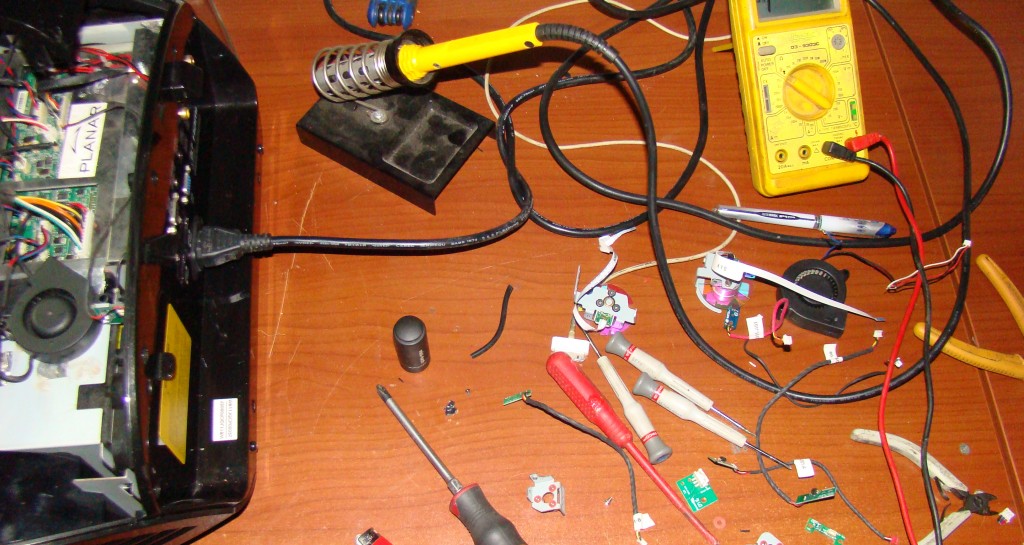 Of course after you replace the Planar worked seamlessly for any hours of asking and even temperatures “polar” there in the color wheel.

Epanapaytika not yet from this solution because the sensor design almost efaptotan on the color wheel and there was not much room for fast elimination of temperature, something that I don’t know how it will evolve in the future, so I took matters into my own hands.

I used a small washer/spacer in order to give a short walking distance to allow the passage of fresh air as it comes from the blower but without influence and the values which reads the sensor. 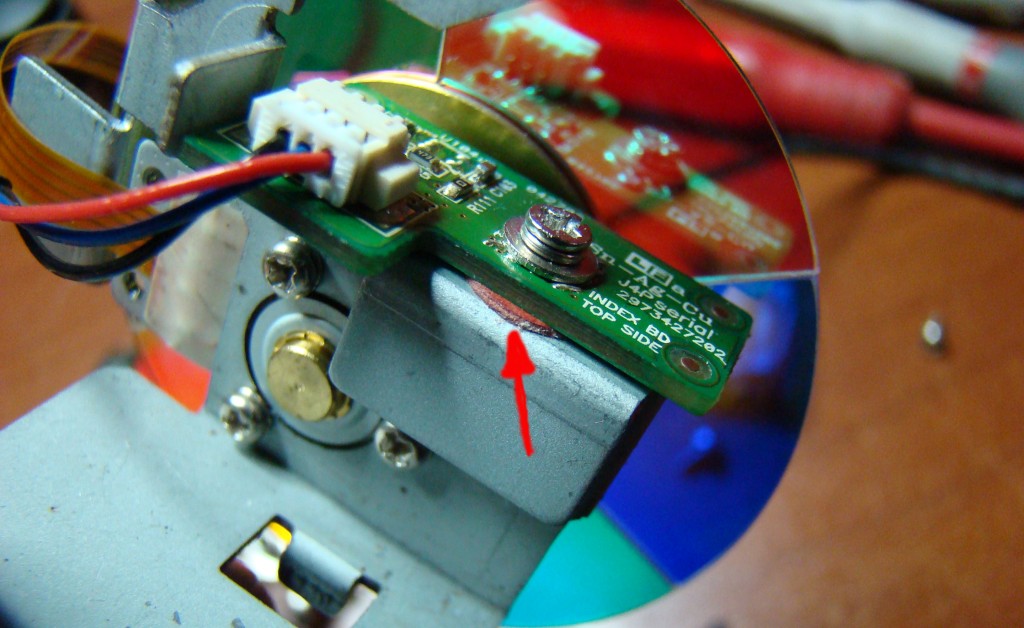 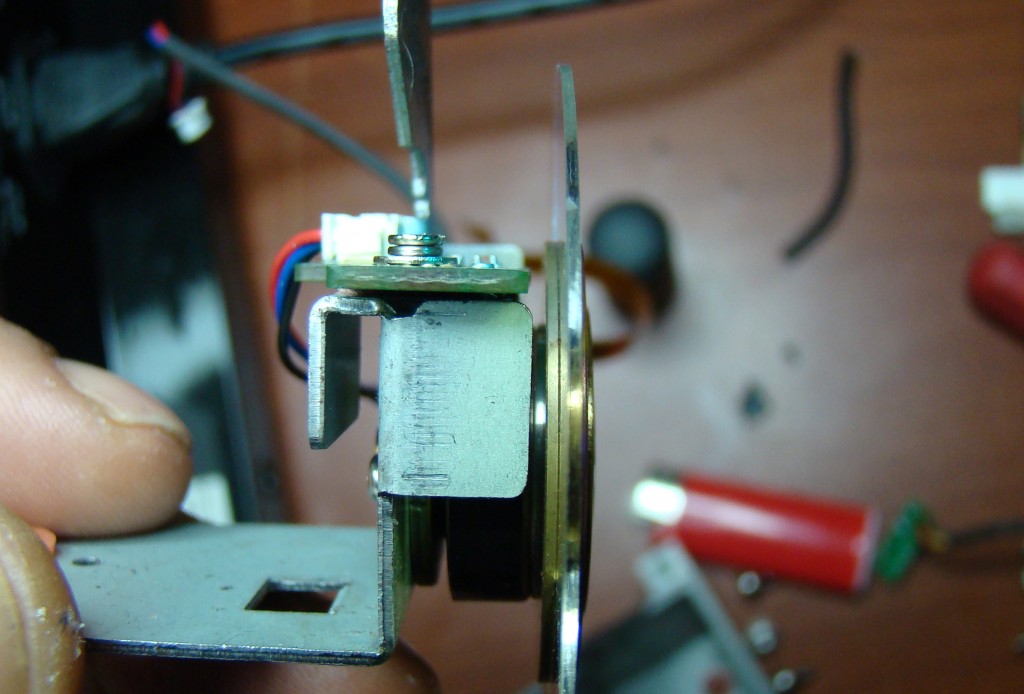 After the last amendment, sat back, put a loose tainioyla in player and enjoyed this wonderful projector …

Get a few impressions if you have no complaint …

The Planar menu that shouts from afar that is “Lab” … No of Eyelash for the show and has everything in superlatives, minus CMS … you do not need.

My first impression was the Planar did fine the flashlight and the deep blacks for DLP projector.

The sharpness of the lens is located in more … his own levels.. and its image is the best that you can see in DLP projector. 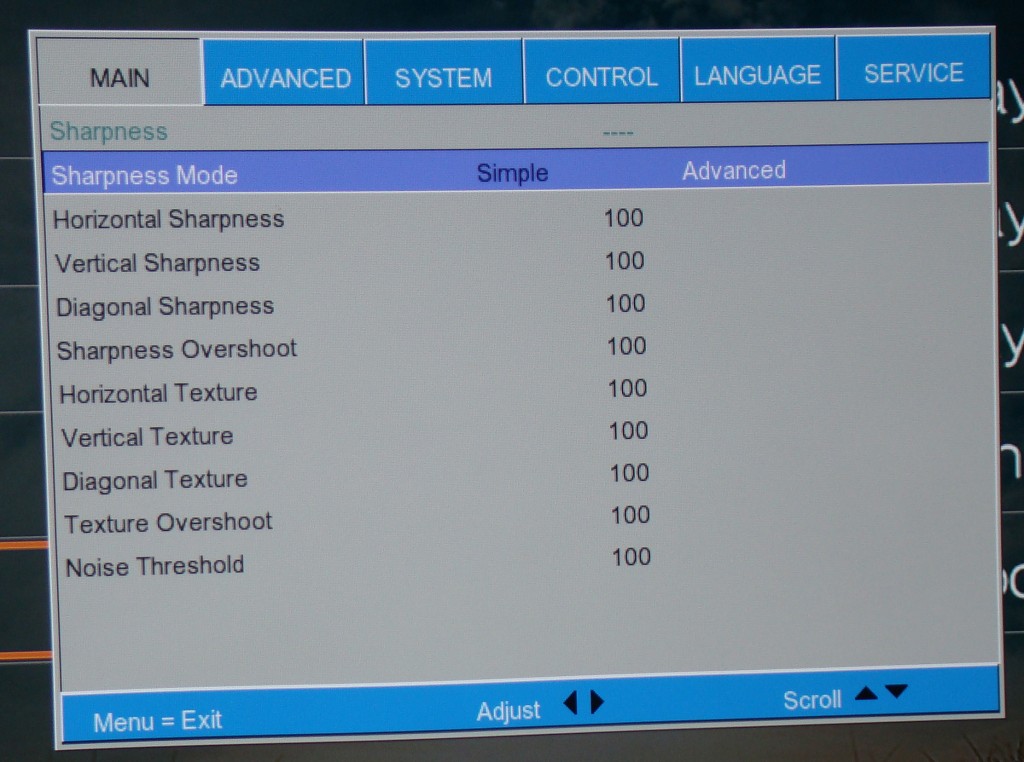 For the IRIS have written hymns, and now I can understand why. Such dark shots I couldn’t imagine that I would see in DLP projector … and yet I saw. If someone were to ask me what DMD chip believe that wearing the DC5 Planar can and I would say 6:) 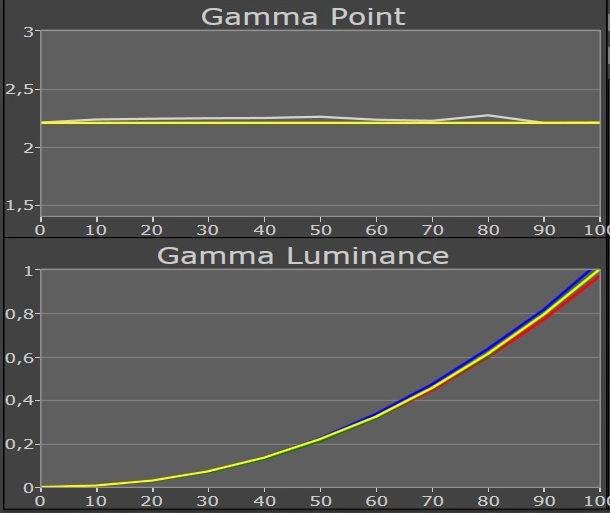 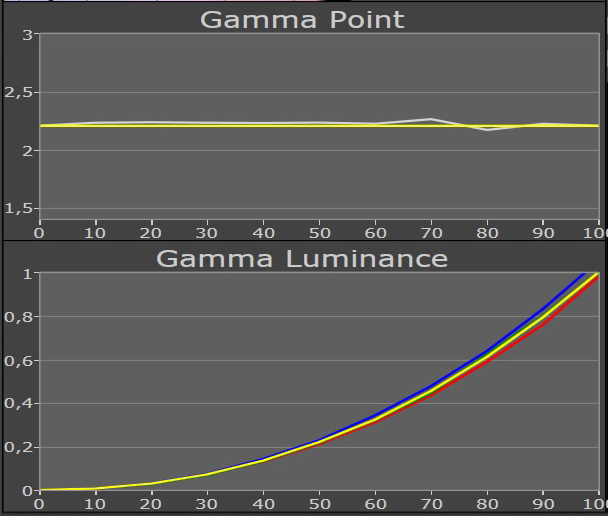 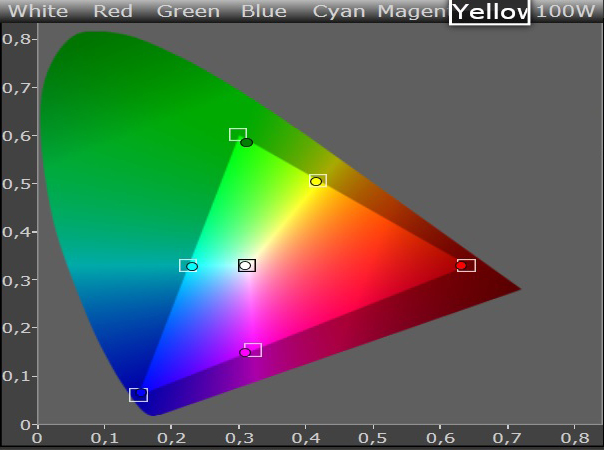 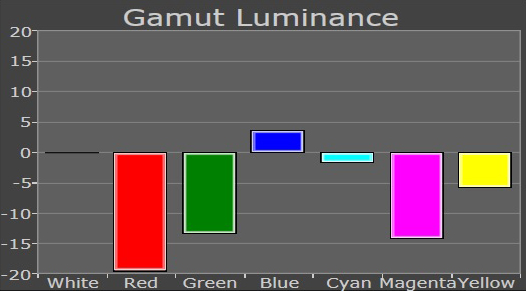 As you understand and by the Planar graphs is a factory kalorythmismenos headlight and think that this is 2007 model so I admire him even more.

End to wish kalotheatos on the lucky owner there to neighbor Italy from where came the floodlight for repair.