Is the future in video projection laser technology? 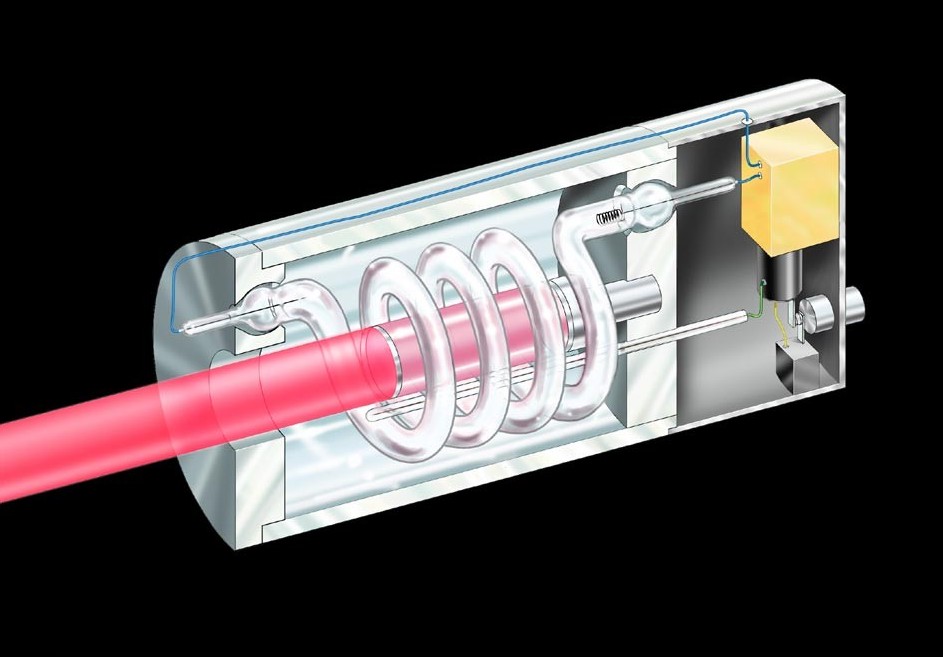 Older and before ending up in the laser diode as light source, manufacturers did a short “passage” from led technology. Technology that proved insufficient for modern home cinema projectors for various reasons and soon was abandoned, remaining only in a small professional brightness projectors.

White light consists of three primary RGB colors in certain proportions. In this analogy the green color dominates and assuming the brightness of our projector to display white is 1000 lumen, then around the Green will be lumen 715, 210 blue and Red 75 lumen respectively.

As you understand to a projector using RGB led as the light source, the Green led should be multiple power from the other two.

This was the unsolved problem of using led in video projection, because the construction of a so strong led him required a combination of high costs, huge energy consumption, cooling water system of intricate and complex optical system for direction of photons, combination construction uneconomic as you understand.

Such deployments cost as a good car, and at best could produce a combined 400-500 lumen brightness, which limit the size of the view max at 92 inches, and their failure in the world market was more than confident as she became.

This failure of using led as a replacement of traditional high-pressure bulb led manufacturers in (single) dromo laser.

Manufacturer of the first laser device was the American electrician/engineer Theodore Maiman and “triggered” on 16 May 1960 at HRL laboratories famously (Hughes Research Lab) somewhere between the shores of Malibu and the hills of Beverly Hills city of Los Angeles. 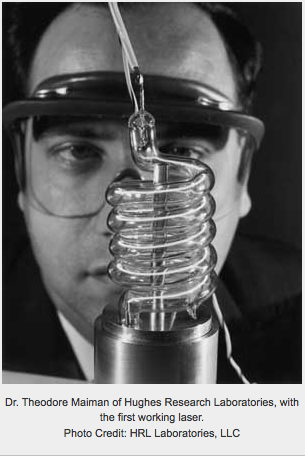 The laser (Light Amplification by Stimulated Emission of Radiation-light amplification by stimulated emission of radiation) is a diode that produces light at a specific wavelength/color which is emitted in a particular direction in the form of a RADIUS (unlike all other light sources that emit light in all directions). 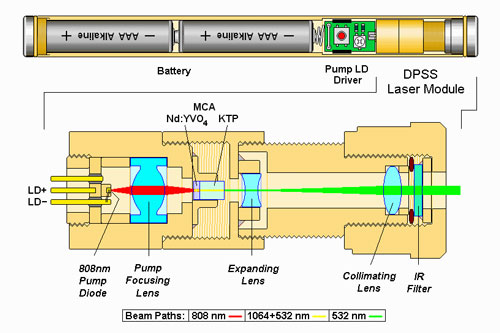 For more details of how this is achieved you can take a look here.

With one of the main problems already solved (that of directionality of photons), the engineers in laboratories of companies began to build the new “free lamp” technology trying to control and at the same time production costs so that this solution is workable and in low cost implementations. The solution to the cost issue came from a fairly well-known chemical material, phosphorus (chemical symbol P, atomic number 15, specific gravity 30.97376) as we will see below.

The first company who did the laser technology in the headlights were the Casio, which essentially continued the work from there that the left led diodes.

Created the RGB laser Hybrid technology that made use of only laser for the creation of green Wattofagoy other and blue, leaving the Red the led diodes to complement the rest of the spectrum of light until the creation of white.

This projector was named hybrid because it made simultaneous use of both technologies (laser/led).

Let’s see in detail ways to implement optical laser of each company.

The Casio pioneer well built the first hybrid laser projector. This design uses red led to creation of the color red and a blue laser diode (for precision diode array) for the creation of the blue color. Green created “hybrid” will say when special green phosphorus in the form of colour wheel excite from the blue laser beam.

So we create the following Optical Laser Hybrid engine of Casio. 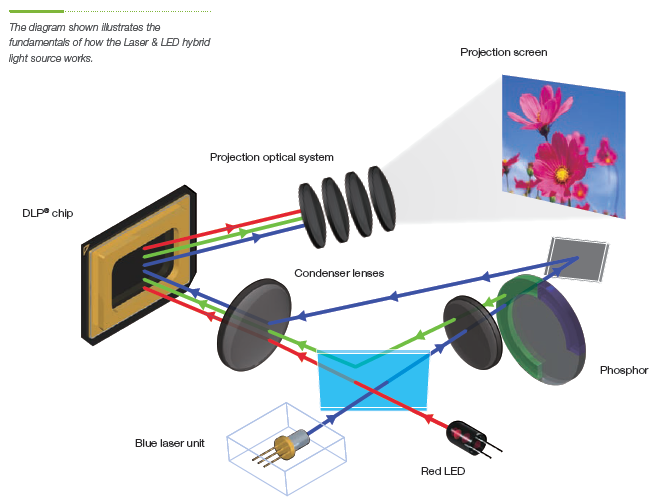 Viewsonic, Optoma companies and Acer’s side created a variation of the above Visual Laser machine using two, led to the creation of red and blue, and a blue laser diode for the creation of green color again average method of green phosphor. 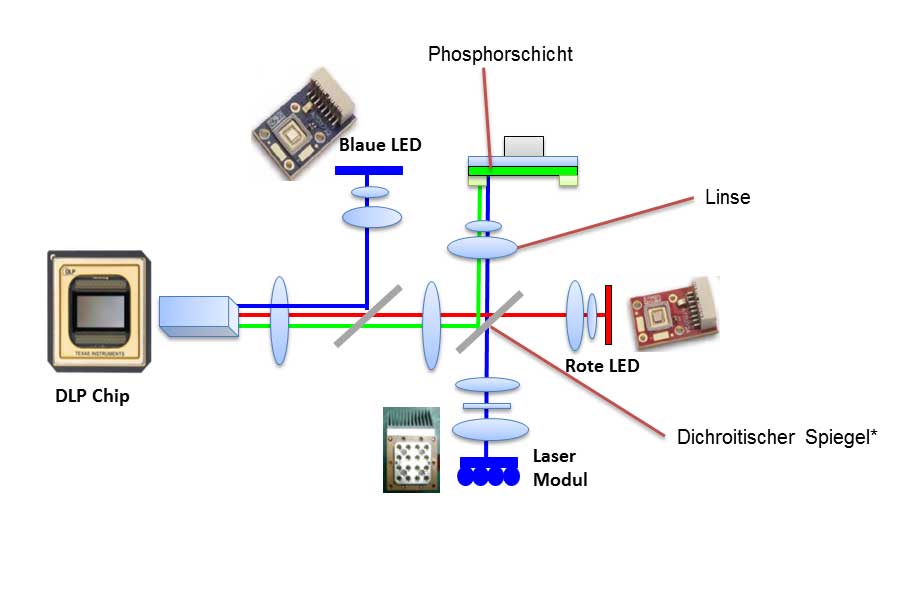 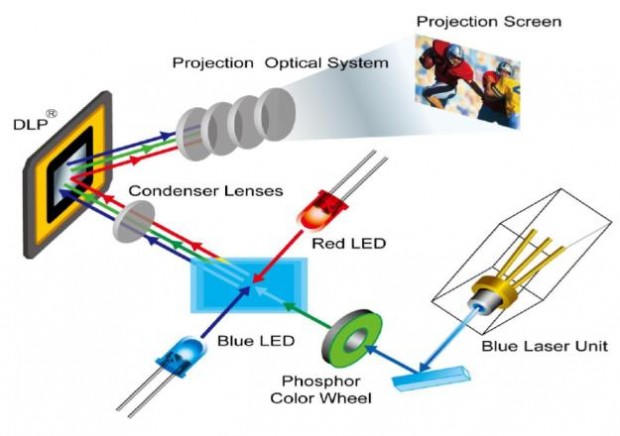 Also the traditional bulb companies sat on not with its hands in this fever of evolution.

The Osram lamp presented his Phaser. The name derives from the mixing of the words laser and phosphor.

This bulb consists of 32 blue laser diodes, branding a wheel consisting of red and green phosphor. This will create three primary colors RGB.

The Phaser of Osram lamp is the following. 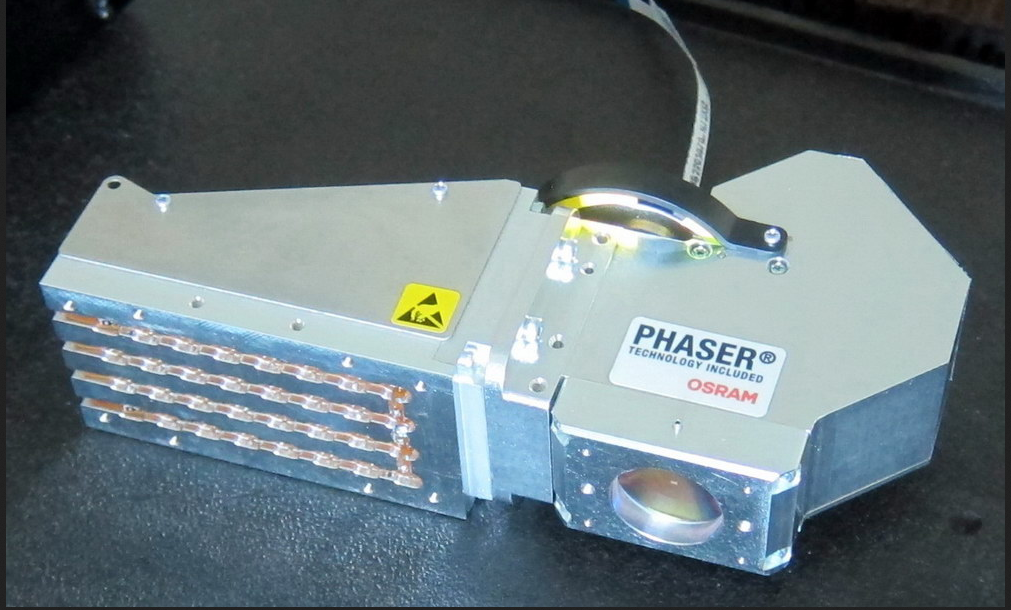 Also the same company a few months ago and announced the creation of the first compact laser multi-chip, which consists of 20 laser sources total power 50 Watt and performance 2000 lumen. This chip can be obtained by the manufacturer and to create its own implementation with its own design solutions, in contrast with the Phaser lamp available as an integrated solution. 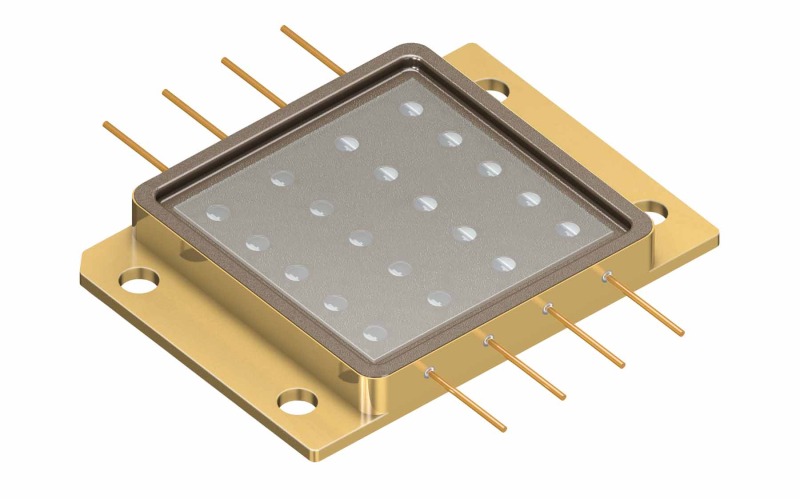 Other companies like Christie for example makes use of a blue diode that directs the beam of a yellow phosphorus, creating yellow and then with appropriate visually makes the separation of red and green (the two colors that make up the yellow) in order to reach the desired effect RGB. Such a machine is called a laser/phosphor.

The exact same layout and uses the new Epson LS1000 makes use of a blue laser diode for the creation of blue color and another the same passage that directs it to yellow phosphorus in yellow color. Then yellow breaks down into red and Green through special optical arrays and so have our classic final ending RGB. 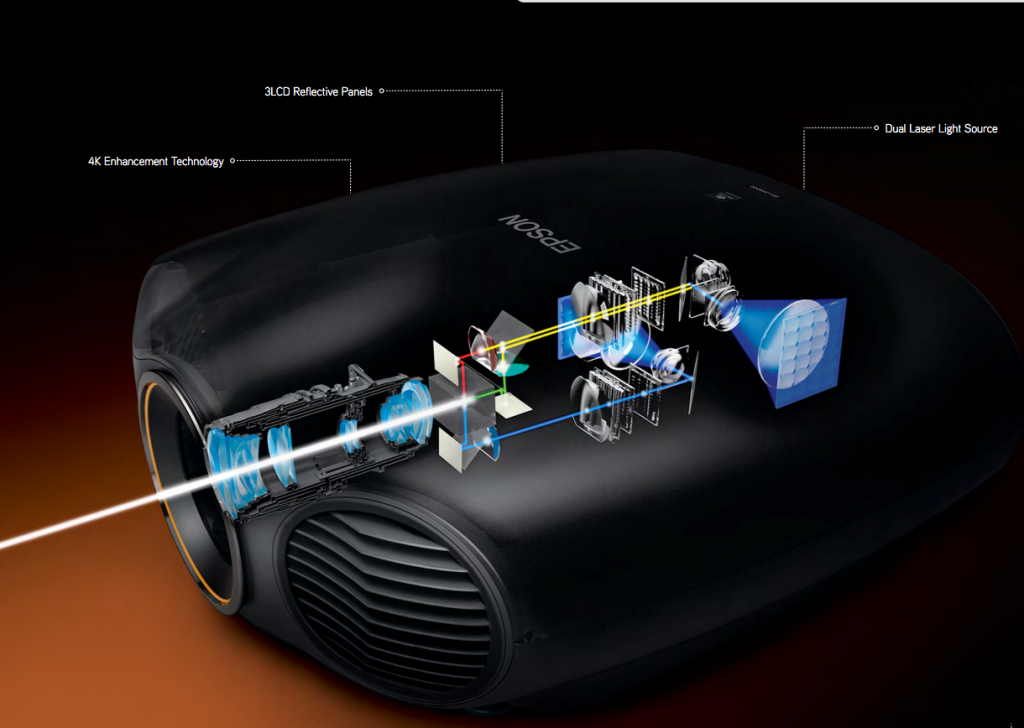 Them as regards the various hybrid laser technologies that make use of phosphorus or led in order to achieve the creation of white light RGB. O why these implementations use only blue laser is the cost. The blue diode laser is inexpensive, easy to build, mass-produced and you with an array consisting of cheap laser diodes of the 1.6 Watt to produce sufficient brightness even through phosphorus (optical/laser phosphor machine can produce up to 3000 lumen at this stage with the 6000-8000 aspirations lumen in the near future).

When cost is not a problem though, the game enters and Pure laser technology, which as we understand from the name, is a technology that uses laser diodes exclusively for the creation of all three primary colors RGB.

This technology has been launched by the hijack headlights cinemas and then timidly to use and cheapest implementations.

This technology makes use of blue laser diode, red and green colour to create white light RGB (And here the greater power and brightness the need from the Green laser). 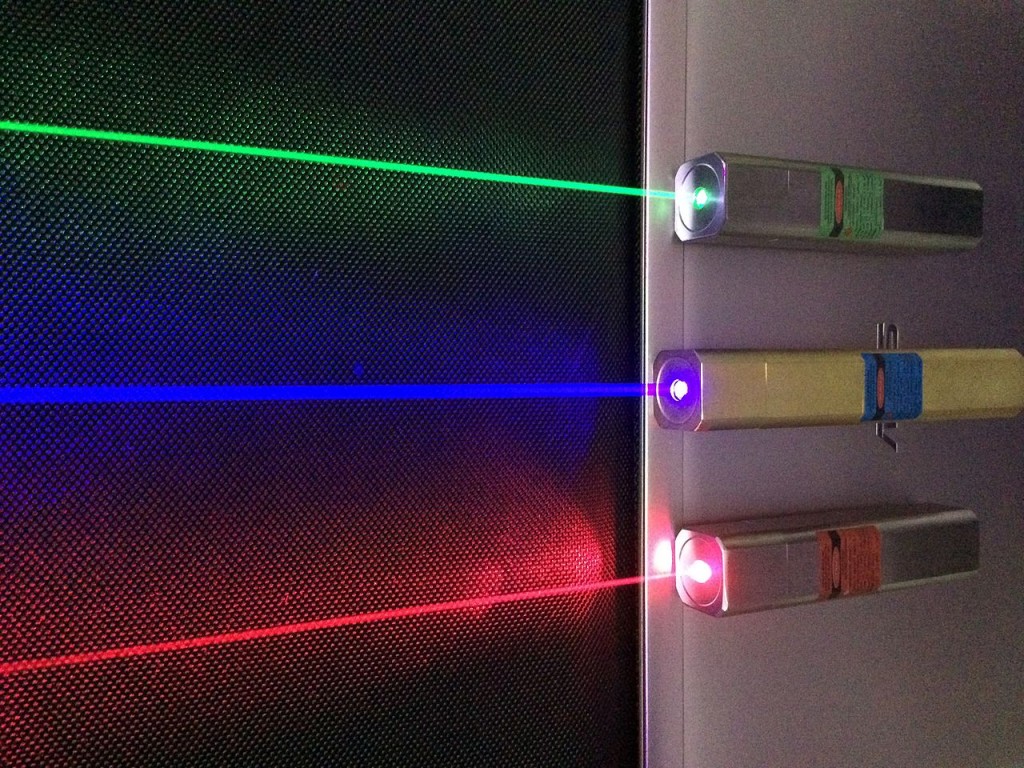 The pure optics laser machine looks something like this …

Chip To SLM (Spatial Light Modulators) helps create many smaller beams over a larger area so as to create sufficient size beam to be directed at the Panel of the projector and then on cloth. 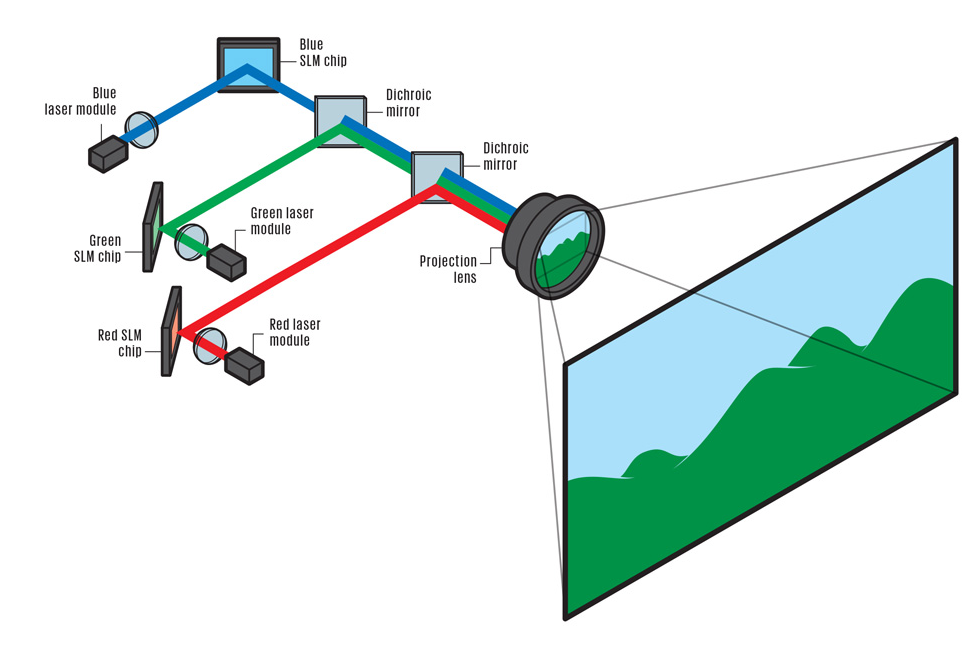 When we talk about pure laser projectors usually mean large “beasts” which are manufactured by companies that traditionally deal with the sale and installation of projection systems in theaters, large meeting rooms, etc.

O first install a pure laser projector was on 23 June in room 1 of the Shanghai Film Art Center in China by Christie and going for 3D DLP projector 4K analysis that produces 72,000 lumen (the previous record was achieved with Xenon bulbs were 35,000 lumen) and “shoots” a curved screen measures 23!! 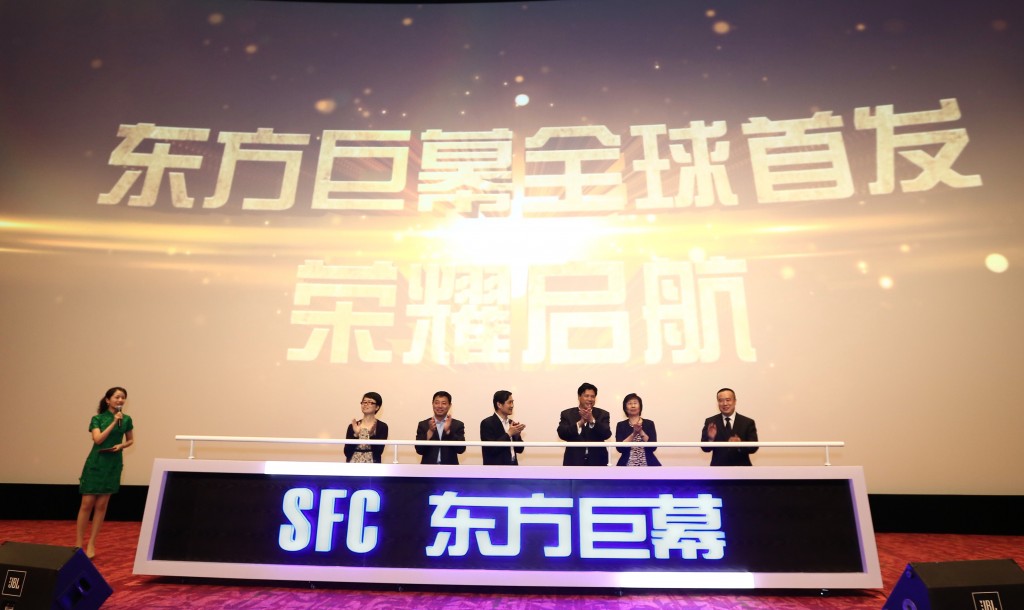 Pure laser projectors of lesser grade have begun timidly to exhibit and other manufacturers such as Panasonic, others again the cost is excessive and disproportionate with what they offer.

As in other innovative technologies, time is the best “doctor” production costs and for me the Pure laser technology pace somewhat with the film 4K analysis, and risk to predict that for at least 5 years still will not find fertile ground to katoikisoyn in our lounges.

As regards the General advantages of laser technology is enough.

However, the laser technology brings a breath of change/evolution in projectors and keeps interest high for those of us who adore this hobby. There remains only to try a phosphor/laser projector (which will be soon) to jump and the first safe conclusions as to its performance in specific areas of the image.

Laser solution comes to untie his hands professional who will provide security as regards accidents (random failure lamp) and reduced cost for use in terms of frequent changes lamps (and if it is and there talking about great Xenon plus relieving).

Users home cinema projector, laser technology has nothing to offer more than the steadier chromatic behavior over time (this of course remains to verify).

The theme cost reduction use (bulb replacement) is a bit more complicated as regards home projectors.

The marketing companies certainly flashy thousands hours of life without lazer mentions that the rest of the projector will have “trashing” much earlier (unless someone believes that you will see fine on LCD projector after 10,000 hours e.g., LCD and say because in DLP can. 🙂 ).

The other issue is that usually the owner a home projector goes a replacement/upgrade several times before I even need change first the lamp, as a result of metriasmenis and selective use of.

I BC being holder of a projector for the last 15 years, has no need to change lightbulb over 1-2 times in total before I replace the entire projector within upgrade. With an average of 3 hours daily view (excessive number assuming that some days will not undertake screening, interruptions, lack of time, etc.) then a average bulb will take us from 2 to 3 years.

Assuming we get a new bulb and still, then hopefully touch the 6 years. There is no IE even lamp cost issue as it tends to occur from companies that are starting to “peddle” laser technology as an economical solution.

If put into the equation and the higher cost of acquiring a laser projector then we find that … Perhaps it is true vice versa.

This parenthesis as a personal opinion on cost reduction as regards non-need to replace bulb in laser projectors.

I hope that you found the article useful …