Color correction and contrast increasing disparity in LCD part I

As we mentioned in part I of our article, it’s time to consider extensively the alleged disparity in LCD (LCD-SXRD-DILA) projectors.

We know very well that the first part of the article was fairly “hard”, at least in the less initiated with the workings of an LCD optical engine and here we will try to talk even with more simple and understandable way.

In our first article we dealt more with the rise of the black and generally contrast, rather than with the chromatic dispersion. Now it’s time for exactly the opposite.

In an LCD optical engine, apart from the polarizing filters and the panels, there dichrwikoi mirrors that are before them and play a crucial role in our final image.

Their role is very important, and as you’ll see below, crucial for the phenomenon of color differences.

What is color variation;

Chromatic dispersion is the annoying phenomenon that mostly distinguish white tab appears as redness and slightly to one side of the screen and slightly prasinila in the other (actually it’s shades of blue and matzetas).

Most owners, not to say everybody have noticed this phenomenon and knows very well what he is talking about. 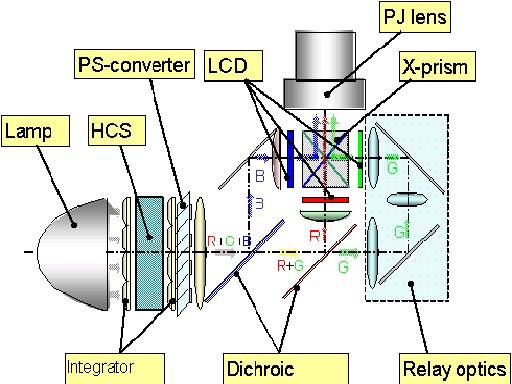 Distinguish clearly the path of light through dichrwika filters before redirected by mirrors in the polarizing filters, and then in the Panel.

One is to separate the three primary colors of light (blue, red and green) and send them separately in three of our panel and the other is to send the correct percentage, reflecting light like a mirror and leaving like glass the rest to pass. In essence a role (he of separations of colors) other reasons for easier understanding the analysed in two. Thus the otherwise discerning colors stand out and in essence the percentage of light because light comprises approximately 71% green 7% blue and 22% red. The small percentage of blue explains why not automatically “mpledizei” our picture at some point due to color differences.

If a filter or dichrwiko transmission mirror has the wrong inclination with respect to the horizontal or the vertical axis, automatic light unevenly distributed (reaching) our panels with final result on chromatic dispersion.

Imagine that in order to create a perfect white tab on our screen will have the three panels to us fed evenly across the surface of the base color and these in their turn to send evenly in the lens and then on screen.

If, for example, reduce the intensity of light in a corner of the “green” Panel then automatically result will take kokkinizoysa complexion in this corner, a and the red color will prevail at this point.

Most manufacturers give the possibility to the technician to configure these filters (e.g. panasonic), and still others not (e.g. sanyo), although an experienced technician always brisei solutions for their setting. 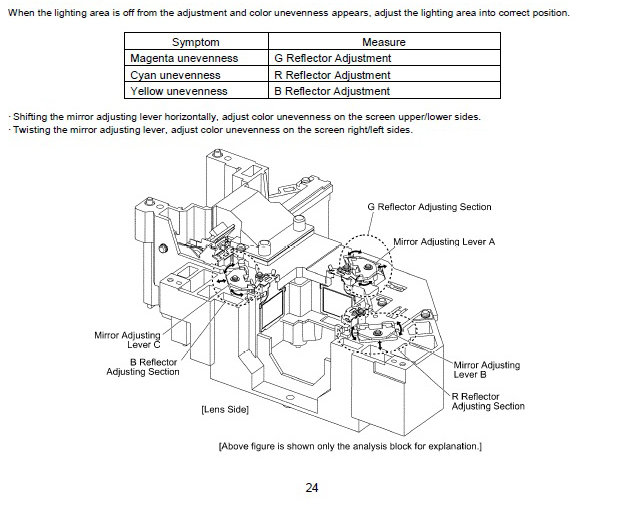 Of course we come to the key question … These visually not regulated properly from the factory?

On a Sony it will argiseis to see color variation or may not see it at all while on a Epson is unlikely to buy him so (very great indeed ..).

Yes, absolutely. An experienced technician can bring the setting in absolute levels (100% white) if the course allows the construction of the projector (the filters are adjustable) or in very good degree if there are no sliders.

With the above we finished from the problem called chromatic dispersion;

An important role plays the projector lamp. No lamp are the same … and no mirror bulb same as another. So, else feeds light optical projector one lamp and otherwise or another. Even the lamp housing may not be exactly identical to construction of another, causes variation in the distribution of light.

When if you change bulb … suddenly to see chromatic uniformity while we didn’t or vice versa?

Yes … even on DLP projector … incredible; And yet true … (of course, to a much lesser extent than the uniformity that give the unsettled dichrwika filters).

Of course there is the chromatic variation due to dust accumulation in the polarizing filters and Panel of the projector, but this comes after some time (over 500 hours) and are easily recognizable by the bright red or green color which is like accumulated dots (cloud of many tiny dots) … e.g. the red cloud in the photo below … that seems clear that it is dust on the polarizing filters or in panels.

These few for today … and I hope our article was perfectly understood by you all!

The projectorjunkies wishes you good views and good summer … and for the hard times that we spend as a nation and as a people uniquely, just to remind you that … It is in the DNA of the Greeks not to ever put it down … can we find obstacles and sometimes we fall … others always have the power to xanasikwnomaste … stronger, United and more apofasimenoi than ever. This will do and now … believe the …